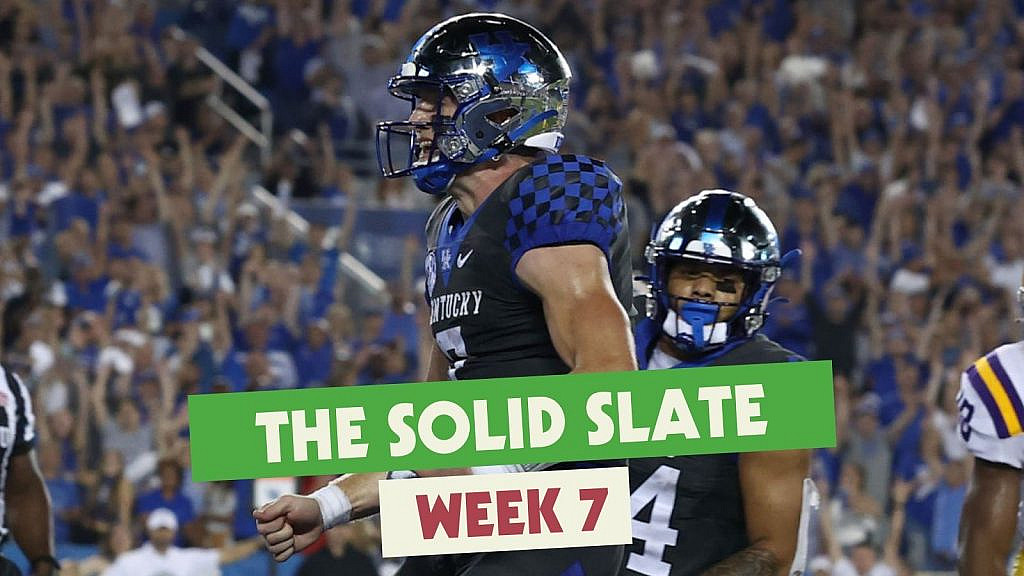 This past weekend, I moved. I won’t tell you where, for fear of my countless fans beating down my door for an autograph.

Taking your life and planting it somewhere else is difficult for a myriad of reasons. But I’ve moved eight times in the last seven years, so you can consider me an expert. After years of practice, I have the packing down to a science at least. I’ve become really good at taking oddly-shaped household items and making them fit, Tetris-style, in a Bankers’ Box. And I’m even better at unpacking and rearranging things once I arrive at my new place. It’s almost a Zen-like experience, furnishing something new from everything familiar in a place that wasn’t designed specifically for you or what you own.

I think most of us are in that boat after last weekend’s upheaval. Countless close games and overtime struggles, and (earthquake of earthquakes) down went Bama.

How do we pick up the pieces in this new place and arrange them into something livable, something exciting?

Let me design your schedule. Below I’ve picked out the best games this coming weekend. Clemson @ Syracuse (7p/6p, ESPN) leads off your Friday. The Orange almost knocked off Wake Forest in the Carrier Dome last week, and now they have a chance to make a statement by tripping up a reeling Tigers team. After a bye, DJU and the Clemson offense should be reloaded, but how much can they improve in a week?

The early slot is your best bet if you want to get things done because it’s a lighter group of games. Don’t get me wrong, both of the big matchups could have close finishes, but early in the afternoon might be a good time for a siesta or fiesta (your pick).

Oklahoma State @ Texas (12p/11a, FOX) might turn out to be a slaughter. The Cowboys have limped through the year offensively, not doing much of anything well. Their D has been fine against bad to so-so competition, and it struggled with the latter. They’re traveling to Austin, where a likely infuriated Longhorn herd waits to greet them. Fresh off a maddening defeat against Oklahoma in the Red River Shootout, I’d expect Texas to be out for blood. I don’t usually give betting advice in this schedule, but I would take UT minus absolutely anything here. But who knows? Maybe the Cowboys retooled over the bye week.

Auburn @ Arkansas (12p/11a, CBS) intrigues me because I can’t figure Bo Nix out. At times, he slings the pigskin all over the yard, ducking and dodging defensive pressure like Johnny Football, but at others he makes such severe mental errors that I honestly can’t fathom his thought process. The Tigers aren’t really bad at anything, which makes them a dangerous matchup for a Hawg squad smarting from a close loss to Ole Miss. Arkansas can’t get hung up on the past. They have the talent, especially on the ground and in pass defense, to win here. I’ve been impressed with Trelon Smith and Raheim Sanders at RB. And they’re at home. It’s time they took care of business.

Kentucky @ Georgia (3:30p/2:30p, CBS) is a huge game that no one picked out before the season, I guarantee. The unquestioned best team in the nation now, Georgia boasts an efficient offense helmed by reliable Stetson Bennett and a defense without any flaws. I mean, the Bulldogs are first in the sport in yards AND points allowed. What more needs to be said? Despite their early successes, Kentucky must feel like David stepping onto Goliath’s home turf. Will Levis has the trust of his team, and yes, they beat Florida. But they’ve struggled at times on offense, and they don’t really have the luxury of doing so this week.

BYU @ Baylor (3:30p/2:30p, ESPN) is such a weird and fun matchup before you even consider the quality of the two teams (which is HIGH). A future Big 12 preview between two religious schools? Sheriff Jeff Grimes facing his former team? Sign me up. Dave Aranda has quietly rebuilt Baylor into a dangerous beast that’s already smoked Iowa State and handled West Virginia. BYU played an uncharacteristically sloppy game last week against Boise State. Did the Cougars get that muck out of their system, or will it rear its head again in Waco?

Ole Miss @ Tennessee (7:30p/6:30p, SECN) might get insane. Both of these squads are known for relentless offense. I honestly didn’t see Tennessee looking this good, but their rushing attack is sixth in the nation, spearheaded by Tiyon Evans. And Virginia Tech transfer Hendon Hooker looks comfortable distributing the ball. The Vols handled two weaker SEC opponents in Mizzou and South Carolina; can they keep up the momentum when the Rebs come to Neyland? Matt Corral and the Ole Miss offense is no joke, even if the defense does give up points in bunches. It remains to be seen whether the Rebels have recovered from their last two stressful matchups – getting run over by Bama and willing their way to a win against Arkansas.

NC State @ Boston College (7:30p/6:30p, ACCN) has conference title implications. You read that correctly. If you tuned out the ACC when Clemson crumpled earlier, now’s the time to pick up where you left off. Both teams are coming off bye weeks. The Wolfpack already beat Clemson, and Devin Leary shows no signs of taking a step back commanding his offense. NC State does a great job of controlling the ball, picking apart defenses, and leaning on its excellent front 7 to make plays. But BC ain’t bad either. They’re secretly decent, especially in the rushing department, led by Pat Garwo III. Expect a close, scrappy game.

Arizona State @ Utah (10p/9p, ESPN) ends your night with #Pac12AfterDark weirdness. The Sun Devils, despite distractions and detractors, have handled their first few games with aplomb. They run the ball really well and boast a surprisingly good defensive unit. Herm Edwards was on the hot seat before, but he’s gained a respite. The Utes can put him right back on it with a decisive win. Cam Rising has revitalized an offense that lagged under now-former Utah QB Charlie Brewer, and their defense held up well last week against the Trojans, winning in a tough place to play. Whose success continues? It’s after dark, so it’s anyone’s guess.