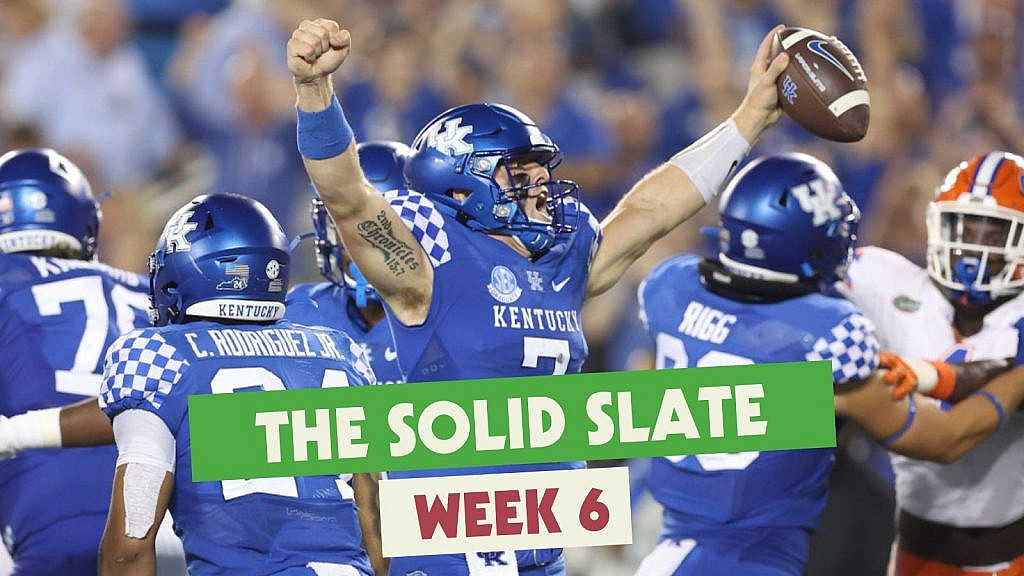 Wow, last week was something, huh?

But as Cage the Elephant reminded us over a decade ago, there ain’t no rest for the wicked. (Or for college football fans in fall.) This weekend, we have a blockbuster schedule of incredible games. I hope (like Lane Kiffin) you have your popcorn ready.

We’ve reached the season’s midpoint. Much has been made clear. Aside from Georgia and Alabama (kinda), the entire college football landscape is the equivalent of this GIF.

Chaos is fun in sports. No one knows anything about what’ll happen. But it creates a dilemma for the college football fan. With so many games out there, with so much chaos waiting to happen, what should you pay attention to? What do you watch, what do you glance at, what do you ignore?

I hope to help with that dilemma. Below is a breakdown of this week’s schedule, broken down by time and priority.

Start out with Stanford @ Arizona State (10:30p/9:30p, ESPN) on Friday. The Cali Trees come off an astonishing victory against Oregon, and the Sun Devils thumped UCLA. At this point, it’s all about momentum. Who can keep marching toward a high finish in the Pac-12, which as usual, is eating itself?

Take some time to relax instead of propping your eyes open for the late, late games. Go to bed early. There’s nothing notable on, and you can safely snooze or read a good book or binge-watch Foundation on Apple TV+ (trust me, it’s worth your time) without fear.

Oklahoma @ Texas (12p/11a, ABC) is the umpteenth playing of the Red River Rivalry/Showdown/Shootout/Whatever. And this time, we have Intrigue. With a capital I. The Sooners haven’t looked entirely the way many expected to start the year. They keep eking out close wins. Spencer Rattler looked much improved last week against K-State with only three incompletions. He’ll likely continue that success against a very mediocre pass D for the Horns, who on offense will probably continue relying on Bijan Robinson to carry the load. Casey Thompson is doing just fine throwing the ball, but he hasn’t had to do so much recently. The winner here is likely in the driver’s seat for the Big 12 title.

Arkansas @ Ole Miss (12p/11a, ESPN) boasts two teams coming off brutal losses to top-ranked Georgia and Alabama. Which group is angrier about it? That remains to be seen. Bama held Ole Miss down last week, but the Rebs still have a high-powered offense. Notably, though, Arkansas ranks second in the nation in passing yards allowed, so Matt Corral may have to hand the ball off a bit more. The bigger question is KJ Jefferson and the Hogs offense. Ole Miss is gettable on D. Expect a points-heavy tilt.

Listen to our Week 6 Preview

Penn State @ Iowa (4p/3p, FOX) is the biggest game of the weekend and a possible Big Ten title game preview. The Hawkeyes are playing their usual brand of efficient power ball, with the added accent of a running back (Tyler Goodson) with serious moves. They haven’t racked up that many yards on offense, if only because their defense has given them five weeks of short fields. And even though the Nits have racked up five wins with Sean Clifford helming the offense, it’s fair to wonder whether you can fully trust him in a big road game.

Georgia @ Auburn (3:30p/2:30p, CBS) may be a ritual slaughter. The Dawgs showed no signs of slowing down last week, and they’re by far the best defensive team in college football. Bo Nix won’t be able to play backyard football like he did last week against LSU. And Georgia didn’t seem like they took a step back with Stetson Bennett IV under center.

LSU @ Kentucky (7:30p/6:30p, SECN) pits a smarting Tigahs squad against a Wildcat team that’s overperformed, coming off of a stunning upset of Florida. Kentucky relies on a better-than-average rushing attack and excellent all-around D to get the job done. And LSU has shown a tendency to revert to a one-dimensional passing attack when threatened. They’ll need to play up to a hungry team on the road, but if the Wildcats are emotionally drained, the Tigahs could take advantage.

Alabama @ Texas A&M (8p/7p, CBS) is a crockpotting waiting to happen. But hey, never pass up a chance to see the Tide get to work. I don’t anticipate much resistance from the Aggies here, who haven’t really looked the same since Zach Calzada was forced into the starting QB role. This is a tougher defensive test for Bama than last week, though. The Aggies don’t generally allow a lot of points and keep a good lid on opponents’ passing attacks.

That’s all! Follow me on Twitter for game breakdowns, news, and other stuff. Soon, I’ll be letting you know which teams are still eligible for a CFB Playoff berth based on my algorithm that has never failed to accurately predict the Playoff field. Check it out, and happy watching!