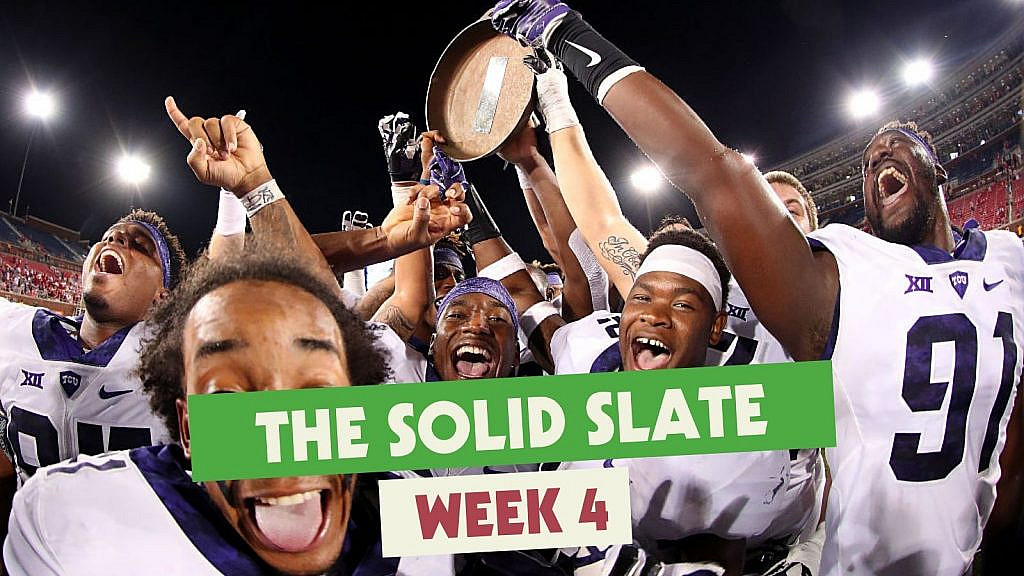 We’ve already made it through the first act of this college football season. We have preliminary data on every team out there.

Now, though, is when the proving starts. Most squads start conference play this week. And for those in the Power 5, these are the games that really make a difference. No longer can you dunk on cupcake schools with lesser talent. Well, unless you’re in the Big 12 and you get to face Kansas. (I’m sorry, Jayhawks. I deal in truth here.)

And here’s another truth: This is the most seemingly wide open season of college football in a while. The perennial Big Three of Clemson, Ohio State, and Alabama all look vulnerable.

With so much going on, what should you watch and what can you safely ignore?

Let me clue you in! Check out my breakdown of this week’s games below.

But first! On Friday, Wake Forest @ Virginia (7p/6p, ESPN2) leads off the schedule in style. The Deacs have thumped three bad teams so far, and carry their undefeated record into Charlottesville, where the Cavs await, smarting from their 20-point drubbing at North Carolina’s hands. And Liberty @ Syracuse (8p/7p, ACCN) emanates from the Carrier Dome a touch later. Malik Willis hasn’t faced a defense of this caliber so far this year. It’ll be his first big test – and possibly his last until November 6, when the Flames face Ole Miss.

Choose your own adventure. Honestly. Any one of these timeslots is conceivably skippable. Look, when the best game of the week is probably Notre Dame/Wisconsin, which could turn out to be really boring, the world is your oyster. I suggest you bank some brownie points with the fam or with your significant other, or get ahead on your weekend work, because (spoiler alert) next week is ABSOLUTELY LOADED.

Listen to our Week 4 Preview

Notre Dame @ Wisconsin (12p/11a, FOX) features former Badger legend Jack Coan leading the Irish into a neutral-site smackdown at Soldier Field. Kind of like Benedict Arnold, except this traitor is commanding the side that doesn’t wear red. Regardless, Notre Dame would like to keep their undefeated record going, thank you very much, and they really don’t appreciate getting scared every week by such formidable foes as *checks notes* Florida State, Toledo, and Purdue. Oh. Wisconsin will be up for this one, with an extra week to rest and prepare. With two smashmouth programs like this, there will be blood.

SMU @ TCU (12p/11a, FS1) should provide welcome relief from your Big Screen headliner. This game should have everything: points, Frog defense, Mustang deep passes, and a cast iron pan that the winner gets for some reason. That’s right, this here’s a rivalry, and apart from the records, we can also throw out any preconceived notions as to how these teams will perform. SMU needed a last-second Hail Mary last week to beat the only semi-competent football team on their schedule so far, and TCU beat Cal by two (!!) points two weeks ago then promptly took a bye. So I have no idea who wins here. And neither do you.

Texas A&M @ Arkansas (3:30p/2:30p, CBS) comes your way from JerryWorld in Arlington, TX. This would be an excellent time for the Hogs to prove that their victory over Texas wasn’t a fluke. KJ Jefferson’s already being compared to Cam Newton (by opposing defenses, no less). That’s high praise. But the Aggies don’t like allowing points. They’ve held every team they’ve played under 10 points. (Granted, those teams were Kent State, Colorado, and New Mexico. But still!) My big headscratcher? Whether Zach Calzada’s a good quarterback. He’ll need to be. The Razorback secondary is no joke.

Clemson @ NC State (3:30p/2:30p, ESPN) would be an excellent time for the Tigers to show up and play offensive football. They largely failed to do that against Georgia and Georgia Tech, instead appearing anemic, leaving their D to keep them in both games. Maybe a change of scenery is what Clemson needs. A move to the capital of the northernmost Carolina, where a salty Wolfpack would like to demonstrate that they can knock off one of college football’s titans. These ravenous beasts see the Tigers are wounded, and have the defensive skill to bring them down if they apply themselves.

West Virginia @ Oklahoma (7:30p/6:30p, ABC) could be competitive. (That’s all we have in this time slot. I’m really hunting for scraps.) It’s not like the Sooners haven’t appeared gettable, with close wins against Tulane and Nebraska. Meanwhile, the Mountaineers just beat ACC contender Virginia Tech and lost a close one to Maryland earlier this year. All I’m saying is that OU better bring more than Spencer Rattler and their offense to bear, because Jarret Doege has experience and can really spin it.

Kansas State @ Oklahoma State (7p/6p, ESPN+) will probably be utter slop. Neither squad’s looked particularly impressive so far (especially the Cowboy offense, woof). But it’s two undefeated teams. Someone’s gotta win. And something hilarious will probably happen, because it’s early-season undefeated teams that will DEFINITELY NOT be undefeated by the end of the year. So mistakes will abound, methinks.

Oregon State @ USC (10:30p/9:30p, FS1) is your classic #Pac12AfterDark matchup: loaded with intrigue and utterly unpredictable. The Beavers seem to be rounding into form. They’ve actually outpaced the Trojans so far this year on offense, and their D has been decent (if suspect in pass coverage). That may not be a problem if the Trojans’ backup QB Jaxson Dart doesn’t live up to his last name in the pigskin-hurling department. He looked fine last week against Wazzu. But Kedon Slovis is getting reps with the first-team offense right now, so my perspective on Dart’s darts may be moot.

There we go! Feel free to follow along for news, game coverage, and takes on Twitter at @WatchingFB, and happy watching!