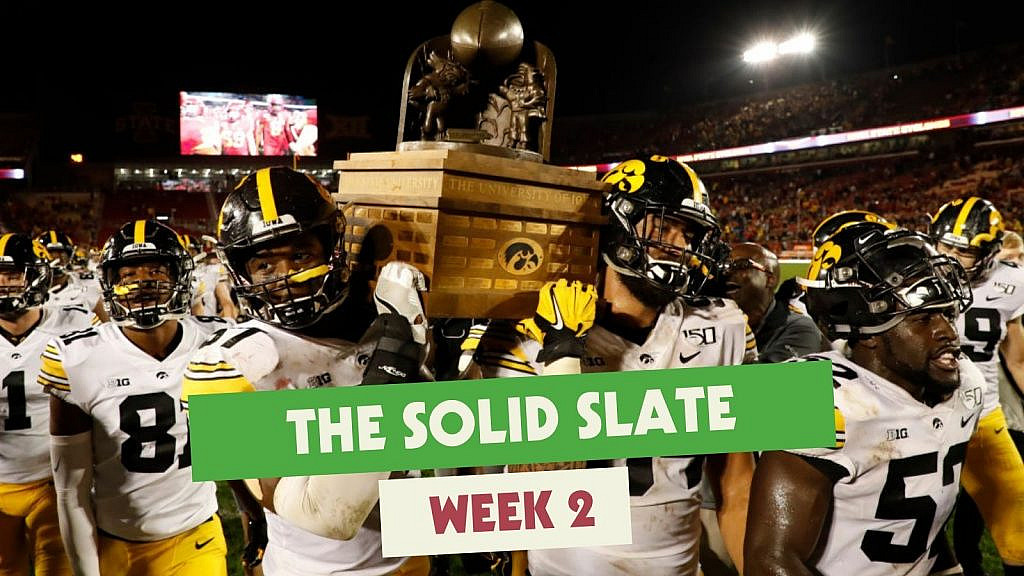 I’m not trying to contribute to Ty and Dan’s Fantasy Things tally, but allow me to make a Ted Lasso reference.

I’m watching through Season 2 (no spoilers, y’all), and one moment in the first episode stuck with me. After a tough draw where his star player somehow killed a dog (don’t ask), Ted gives a great postgame speech, and calls his squad “goldfish.”

See, former college football coach Ted wants his team to have a short memory. Just move on to the next challenge, is the message. But did you know that the whole goldfish thing is a myth? Goldfish actually can remember things for five whole months. (About the length of a college football season. How convenient.)

The only way we learn — really learn — is to remember. Even the mistakes. Even the hard times. Experience is the best teacher.

And boy, did some teams have hard times last week. A bunch of notable upsets and disappointing starts. Then there were others who succeeded marvelously. But that doesn’t mean they should rest on their laurels.

Who keeps rising? Who keeps falling? What should you watch? Let me help you out. Here’s the best games this week, broken down by time and TV channel, in order of importance.

Oregon vs. Ohio State (12p/11a, FOX) leads off the day. The Ducks struggled against Fresno State last week, but they don’t have time to breathe. The Buckeyes will be motivated to improve on both sides of the ball after last week’s tough slog against the Golden Gophers. CJ Stroud must get off to a better start.

Pitt vs. Tennessee (12p/11a, ESPN) will be fine. Probably. Maybe. These are two squads that got wins in Week 1, and they’re pretty evenly matched on paper! Good background noise for your day.

Listen to our Week 2 Preview

Iowa vs. Iowa State (4:30p/3:30p, ABC) comes your way from the corn-infested horror-movie set that is Ames, Iowa. The Clones looked unimpressive against Northern Iowa, but come on, that’s the opener. The Clones always look bad in the opener! That’s not a sign of things to come. Right? Regardless, the Hawkeyes obliterated Indiana and now want to show that it wasn’t a fluke against a presumptive conference title contender.

UAB vs. Georgia (3:30p/2:30p, ESPN2) is a David-and-Goliath-type tale, if Goliath had already been hit by several stones before David got his shots in. Georgia comes off a hard-fought game against Clemson, and they’re dealing with some virus-related setbacks. That could give the scrappy, dangerous Blazers a (very slim) chance.

Saturday night should prove a wonderful opportunity to take your significant other out for a romantic evening, play with your kids, take a sunset bike ride, or do whatever your heart desires. There’s copious intrigue here, but probably nothing you can’t absorb later by watching highlights.

Texas vs. Arkansas (7p/6p, ESPN) heads up the evening. Hudson Card led the Longhorns to victory in a game they absolutely should have won. Whoop-di-doo. How will they fare against an Arkansas team that wants to prove themselves after last year’s step forward? They looked fine late after early missteps against Rice, and they’ll be hungry. This should be the Horns’ first major test.

Washington vs. Michigan (8p/7p, ABC) is only demoted because Washington fell on their face so hard against Montana that you could hear the impact across the nation. Zero offense. That could be a real problem against a Wolverine squad that looked outright dominant against Western Michigan. The only concern is replacing Ronnie Bell out wide. If they can, this is a great chance for Michigan to grab some momentum.

Utah vs. BYU (10:15p/9:15p, ESPN) will be an absolute BANGER to end the night. Chaz Brewer led the Utes to a convincing victory against eminently beatable Weber State, and the Cougars look ready to meet them after conquering Arizona. Expect a salty, gritty Holy War. Hope you can stay awake.

That’s that! Follow me on Twitter @WatchingFB for news, takes, and game reactions! Until next time, happy watching.