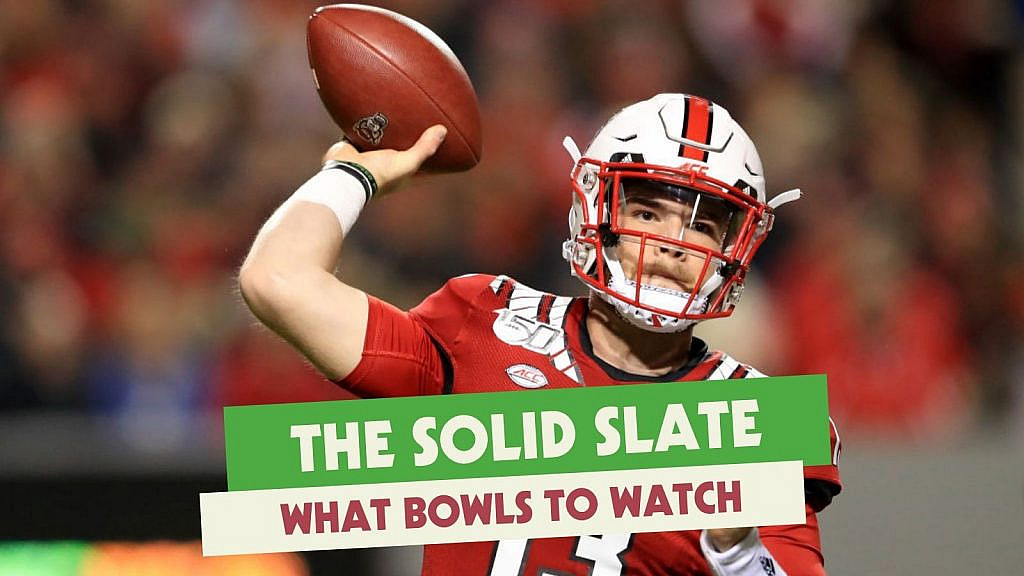 Welcome to the holiday season, folks! This weekend, most of us will be decking the halls and hanging with friends and family.  There’ll be joy, gift-giving, mistletoe, a sumptuous dinner, and snow (if you’re lucky).  There’s a reason Bing Crosby (or Frank Sinatra, one of them, whatever) calls this the Most Wonderful Time Of The Year.

So far, bowl season has been a nonstop ride of surprise and intrigue. The underdogs keep winning, for starters. Western Kentucky’s Bailey Zappe, a noted Verballer, set the record for most TDs thrown in a season. Oh, and Jimmy Kimmel’s bowl had a mascot named Jimmy Kamel! It was an affront to all things sacred!

We’ve got yet another slate of bowls on tap this week as we head toward the new year. Check out which games are worth watching below!

UCF @ Florida (Thu 12/23, 7p/6p, ESPN) is odd on the stats sheet. Did you know the Gators gain about 70 yards per game more on offense, but score almost a point less than UCF per game? It’s true! And it’s very weird! The Knights are sincerely bad at holding onto the ball, but they’ve got similar defensive numbers to Florida’s. Plus, the Gators just lost a ton of talent to the transfer portal. Who will leave the pirate’s den that is Raymond James Stadium with a win?

Houston @ Auburn (Tue 12/28, 12p/11a, ESPN) is one of those games I saw as I scrolled through the bowl schedule for the first time and couldn’t stop grinning. The Tigers gave top ranked Alabama a fight in the Iron Bowl and have proved scrappy all year. They hold down the run, but aren’t as strong against the pass…a pity, because Clayton Tune loves to spin it. I’d also point out that the Cougs are terrifyingly good at defense. This should be an amazing game, and shame on ESPN for putting it on at a time when people are working.

UCLA @ NC State (Tue 12/28, 8p/7p, FOX) face off here. Side note: I keep singing the name of this bowl to the song “Holiday Road” in my head, complete with Casio keyboard dog barking sound effects. Please help me. That aside, the key here to me boils down to whether the Pack can contain Zach Charbonnet, the Bruins’ dominant rusher. I have very little doubt Devin Leary will throw all over a weak UCLA secondary. This is practically a home game for the Bruins, so they’ll have that X-factor on their side, but this is also played in COVID-restricted California, so how much of an X-factor will that be, really?

SMU @ Virginia (Wed 12/29, 11a/10a, ESPN) is a grand slam of a game, fittingly played in a storied baseball stadium! No, not Yankee Stadium! That’s right, seems Boston got envious of their rivals and created a diamond-bound bowl of their own. Neither of these teams really play defense. Consider this a shootout between the Mustangs’ Tanner Mordecai and UVA’s Brennan Armstrong, recipient of most “In A Losing Effort” sound-drops in The Solid Verbal’s history. Is this Armstrong’s time to finally pull himself out of Tartarus, welcoming a Texas team to the frozen North? Boy, I hope so.

Clemson @ Iowa State (Wed 12/29, 5:45p/4:45p, ESPN) would have been a lot more fun had Breece Hall not abandoned ship and opted out, leaving the Clones without a major offensive weapon. They might be easy pickings for a fired up Tigers squad that has absolutely floundered on offense all year, but did a decent job on defense. Then again, this has all the indications of a disgusting, nasty mistake-filled slog. But what do you expect? It’s the Cheez-It Bowl! It’s supposed to be disgusting!

Oregon @ Oklahoma (Wed 12/29, 9:15p/8:15p, ESPN) should be fun. Most of the players that have serious chances of getting picked in the upcoming NFL Draft are sitting out, including electric Duck Kayvon Thibodeaux. Expect Oregon to rely heavily on Travis Dye and the running game. Who knows what the Sooners will do, really. Caleb Williams has failed at important times to impress. Both teams defend the run (and nothing else) well.

There you go! Check me out on Twitter here, and as always, happy watching!