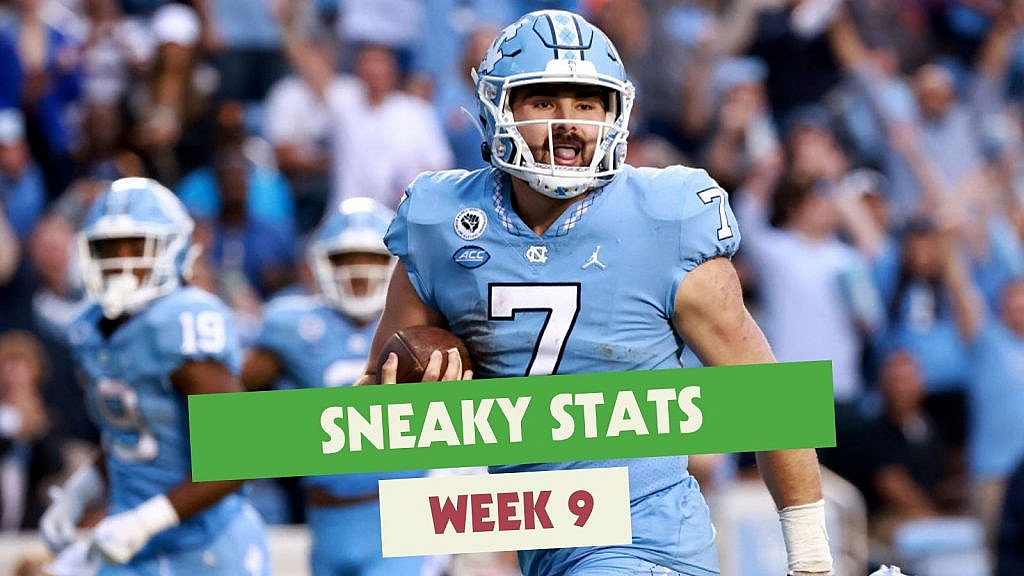 Welcome to back to the Sneaky Stats series! Week 8 brought us a new record for overtimes in a single game, two more top ten losses, behemoth programs struggling to beat their cupcakes, and more! Let’s take a brief look back, and then a look ahead at Week 9 and beyond!

– Unless you have been living under a rock bigger than Bret Bielema himself, you may have heard that Illinois beat Penn State in a college football record 9 overtimes! And yes, that was pretty crazy. But even crazier was that Illinois completed eight passes for 38 yards in the entire game and won! How? Their two running backs combined for 365 rushing yards, averaging 6.4 yards per carry. The takeaways? Penn State is broken and Artur Sitkowski is still the king of ridiculous stat lines (8/19 for 32 passing yards, zero touchdowns, and an interception in a win).

– Wake Forest is 7-0 and might just be legit. After dropping 70 points in 17 minutes of possession this past weekend against Army, they’re now 5th in points per game (43.1). They’re now tied for fourth in turnover margin per game, 21st in sacks, and 27th in first downs. The Demon Deacons are sitting near the top in most every meaningful category outside of raw defensive totals allowed. If the Demon Deacons finish undefeated, Sam Hartman will have to be in the Heisman conversation.

– A Kansas Jayhawks team that is 1-15 dating back to the beginning of the 2020 football season was leading the Oklahoma Sooners 10-0 at halftime, but failed to pull off what would have been one of the most remarkable upsets of all time. And despite all of the Sooners’ perceived struggles, they’re still ranked seventh in the nation in yards per play, fifth in offensive touchdowns, and still unbeaten. And Caleb Williams started off slow this week, but he’s still one of only three quarterbacks averaging more than 10 yards per play on the season.

– Anthony Brown’s inconsistencies have nearly waddled the Oregon Ducks out of the College Football Playoff pond all year long. And this week was no exception with him throwing another two picks. But thankfully Kayvon Thibodeaux and Travis Dye are on the roster. This past week, Dye tallied four rushing touchdowns on consecutive carries (a CFB record) against UCLA. Thibodeaux snagged two sacks, 4.5 tackles for a loss, 9 total tackles, and forced a fumble. The Ducks average over three sacks per game with Thibodeaux in the lineup and just one per contest with him out of the lineup.

– “Brocktober” continues to prove its staying power. Brock Purdy put up another 300 yards passing and threw for a couple scores in Iowa State’s win over previously undefeated Oklahoma State. Iowa State’s offense is now ranked 8th among all FBS teams in yards per play in the month of October.

– Geriatric Pittsburgh quarterback Kenny Pickett is now posting 95th percentile passing efficiency marks among drafted NFL quarterbacks and is accounting for over 15% of the Panthers rushing yards. This grandpa-in-the-making, who has been at the helm for Pittsburgh since Ed Sheeran’s Shape of You was atop the Billboard Hot 100, was the first quarterback of the year to put up over 300 total yards against Clemson’s 9th ranked defense. Pitt’s legit.

– UTSA grabbed their 8th win this season against Louisiana Tech. They’re a fun story, yes. But, wow, they might be the most fake 8-0 team in the history of the sport. They’re outside the top 50 in raw offensive total and efficiency. They’re outside the top 40 on defense. However, if they’re going to keep winning, they may want to continue feeding running back, Sincere McCormick. He’s now averaging over 120 yards from scrimmage through 31 career games for the Roadrunners. McCormick’s logged at least 108 yards from scrimmage in every single game this season.

It’s Week 9 and the more things change, the more they start to look the same. The CFB Playoff may still end up being Alabama, Georgia, Oklahoma, and Ohio State, but there are still plenty of fun college football matchups fueled by some sneaky stats to get excited about!

The ridiculous combined yards per play differential of Michigan and Michigan State this season between them and their opponents. They’re both absolutely annihilating most opponents thus far. They’re both doing it primarily on the ground, averaging a combined 455 rushing yards per game this year. And they’re both incredible at stopping the run too. This matchup is going to come down to Blake Corum (RB, Michigan) versus Kenneth Walker III (RB, Michigan State).

The number of times in Bo Nix’s career where he has completed over 60% of his passes in games where he’s thrown the ball more than 30 times. When Nix has to air it out, he typically struggles. In fact, he’s only completed over 60% of his passes in two games this year (and one of those games came against Akron, so that doesn’t count). Nix is going to have to toss the rock all game long to keep things close with Ole Miss this weekend. High volume gunslinger Bo Nix isn’t usually a good thing for the War Eagle screaming Auburn faithful.

The percentage of North Carolina’s offensive yards that Sam Howell accounts for personally. Yes, he’s accounting for nearly 100% of the passing yards. That much is expected. But he’s also 35% of the Tar Heels rushing attack too. When Notre Dame’s defense has struggled this year, it’s been against mobile quarterbacks. If they can’t contain Howell’s high efficiency passing and newfound legs, their playoff hopes may be derailed this week. Also, if you’ve been along for the ride here with me this year… if only for the brand, I must implore Brian Kelly to finally make it Tyler Buchner Week at quarterback.

Baylor is averaging 7.26 yards per play, good for third in the entire nation. Texas is 11th in the nation with 6.88 yards per play. The only thing preventing this matchup from being an old fashioned Big 12 shootout is Baylor’s 19th ranked scoring defense led by Terrel Bernard who’s averaging six tackles and a half sack per game.

The number of passing touchdowns C.J. Stroud is throwing per game this season. Stroud is first in touchdowns, touchdown percentage, and yards per pass attempt, among all Power Five passers this year. He’s also third in passing yards per game (behind two QBs who throw the ball at least 20 more times per game). Ohio State is going to beat the Penn State Pathetic Little Lion Cubs 100-0 this weekend.

Where Georgia ranks in sacks per play this season. Yes, they rank first in about a dozen different defensive categories, but none more impressive than their pressure and sack percentages. They sack the opposing quarterback 1 out of every 16 snaps (more than double Power Five average). The Bulldogs have 10 players with multiple sacks and seven with double digit pass rush pressures. Why does that matter? Florida’s ranked 50th in pass block efficiency on the year. This is usually a hard fought rivalry game. The only way that happens this week is if star-QB-in-the-making Anthony Richardson is given the keys to Florida’s offense.

SMU has an elite trio of wide receivers in Danny Gray, Rashee Rice, and Reggie Roberson Jr. All three have at least 30 receptions and 406 receiving yards through seven games. Only one other trio in the nation can say that (on Virginia) and they throw the ball ten more times per game than SMU. Tanner Mordecai is tied for first in passing touchdowns on the year with 29 behind only Western Kentucky (who throws the ball 12 more times per game). Houston is only allowing 17 points per game, but they’re going to struggle stopping one of the most efficient (if not the most efficient) passing attacks in the nation.