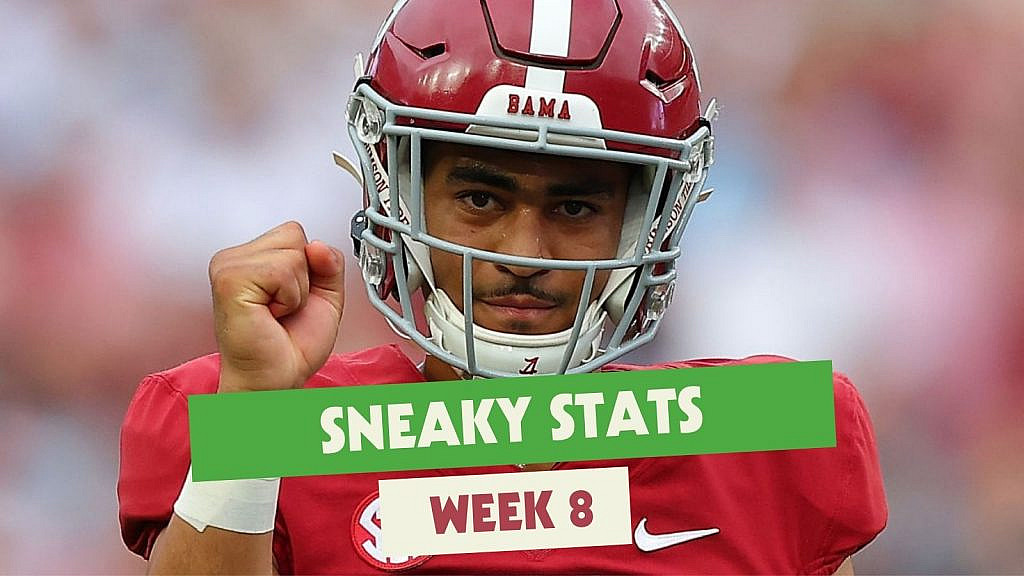 Welcome to back to the Sneaky Stats series! Week 7 brought us a new Heisman candidate, another loss from a top ten team, and plenty of sneaky stats to break down! Let’s take a brief look back, and then a look ahead at Week 8 and beyond!

– It may still be a small sample of play, but Caleb Williams looked like the absolute truth for Oklahoma this weekend in the Sooners’ win over TCU this past week. Through one start and 77 total plays for Williams, the Sooners are 57.9% more efficient in terms of yards per play with him under center than when Spencer Rattler at the helm. But Sooners beware, the last true freshman quarterback we saw that posted 350+ total yards and 3+ touchdowns in their debut was D.J. Uiagalelei for Clemson. Defenses may start to make adjustments later in the year to slow him down.

– The 122nd ranked Iowa offense came into Week 7 with embarrassingly bad efficiency numbers and it finally cost them. Iowa was +15 in turnover margin. Purdue was -5 in turnover margin. When that turnover luck regressed to the mean it meant the worst for the Hawkeyes as Spencer Petras tossed four interceptions. The Hawkeyes failed to eclipse even 300 total yards of offense for the third time this season and will likely drop at least one more game if their offense continues to emulate the pace and efficiency of a turtle. And not the mutant ninja kind of turtle. More like the Maryland Terrapin kind of turtle.

– Oklahoma State might just be the least impressive 6-0 team of all time, but they just keep winning football games. And Texas’ second half woes continued this past weekend, which practically handed the Cowboys the victory on a silver platter. Texas is 8th in the nation in points per game this season. But! They’re well outside the top 30 in points scored in the second half of games. This past week, they could only muster seven points in the entire second half against Oklahoma State. If that trend continues, Texas’ “backness” will have to wait quite a bit longer to truly come to fruition.

– LSU decided to crush the hopes and dreams of Florida fans this week by dropping a smooth 321 rushing yards and 49 total points. Running back Tyrion Davis-Price led that charge, breaking an LSU single-game record of 287 rushing yards on 36 carries. Davis-Price had only posted two games with more than 55 rushing yards prior to two weeks ago. In his past two games (against Kentucky and Florida), he’s rushed for 434 total. He could be in line for some late round draft capital if he keeps this up.

– The Pittsburgh Kenny Picketts (Panthers) blew out another helpless opponent this week in Virginia Tech, and they’re finally ranked in the Top 25 after dominating all season long. Kenny Pickett (who should probably be the team’s official mascot upon leaving for the NFL) threw another two scores and ran in another. He’s now up to 24 total touchdowns to just one interception on the season and sits among the top ten quarterbacks in virtually every single stat that matters.

– Another week, another loss that pushes the Pac-12 playoff hopes down the drain. Arizona State had outgained all of their opponents this year and was a top ten team in yards per play differential coming into their matchup against Utah. Through the first half, it looked like that trend would continue. But then the Utes outgained the Sun Devils 292-82, averaging five more yards per play. What happened? Arizona State stopped pushing the ball downfield and only gave their best playmaker (RB, Rachaad White) a total of six touches in the second half. Woof.

– Ladies and gentleman, the most efficient quarterback in the entire nation with at least 100 total snaps is none other than Georgia backup quarterback, Stetson Bennett! How is that possible? Well, for starters, four of Bennett’s 11 passing touchdowns have gone for 60 yards or more. But the real game-changer is his 7.8 yards per carry. He’s the dual threat that J.T. Daniels could never be for Georgia. Side note: Kudos to Kentucky for being the first team to score two offensive touchdowns against the Bulldogs in a hilarious backdoor cover situation with time expiring.

It’s Week 8 and there are currently five Group of Five Conference football teams ranked in the AP Top 25 Poll. Cincinnati is ranked second overall in the AP Top 25 for the first time in program history ahead of Oklahoma, Alabama, and Ohio State. Oh, and Clemson, LSU, Florida, Texas, and Iowa State aren’t ranked at all. Just like we all predicted. Let’s check out some sneaky stats that could make this crazy season even more fun this week!

Bryce Young averages 4.24 more yards per pass attempt when targeting Jameson Williams (13.65 Y/A) than he does the rest of his offense (8.21 Y/A). Tennessee’s only hope in slowing down Alabama’s offensive efficiency will come from stopping Jameson Williams. If they can do that, they can keep this weekend’s game close.

Clemson is only allowing 5.7 yards per pass attempt this year on defense. Despite their offensive struggles their defense is still ranked 8th in the nation in both yards per play allowed and yards per pass attempt. They’ve also snagged more interceptions (6) from opposing quarterbacks than they’ve allowed passing touchdowns (5). If they can stop Pitt’s highly potent passing, led by Kenny Pickett and Jordan Addison, the Tigers may start their climb back up the rankings this week.

Indiana ranks second in strength of schedule this year. They’ve already faced off with three top ten opponents and it’s only Week 8. Ohio State ranks second in offensive efficiency among all FBS teams and will be the fourth top ten team the Hoosiers have played in the last five weeks. Despite the tough competition, the Hoosiers have only allowed 4.7 yards per play against Cincinnati, Penn State, and Michigan State. That would make them a top 20 defense in the nation if we just looked at the games where they played top ten opponents. That should be impossible. If the Hoosiers can limit the big plays against the Buckeyes, this game may actually come down to the wire.

The Notre Dame offense is 36.5% more efficient with Tyler Buchner at the helm than Jack Coan. They currently rank 95th in yards per play, but they face a USC defense that ranks outside the top 70. Now is the time to hand the reins of the starting job over to Buchner. Not in the middle of an away game in one of the toughest road environments in the nation (two weeks ago against Virginia Tech). But hey, Brian Kelly’s going to do his thing and keep the statuesque veteran in as the starter as long as possible. That’s his #brand at this point and he’s sticking to it.

Where UCLA’s run defense currently ranks among all FBS teams. The Bruins have struggled containing high volume passing offenses this year, but they’ve exceled against run-heavy attacks. Oregon comes in averaging over 200 rushing yards per game, which is great, but they’re going to have to win through the air some this week if they want to avoid a loss. Oregon barely ranks inside the top 100 in passing yards per game, so Anthony Brown is going to have to step up.

The combined total of rush attempts per game between San Diego State and Air Force coming into this weekend’s matchup. That is the highest total of average rush attempts we’ve seen between two opponents with the exception of games between two military academies. And it’s not too often we see a game between a 6-0 (San Diego State) and 6-1 (Air Force) team in the Mountain West. This slobber knocker, fought amidst a bevy of 4-yard carries and a cloud of dust, could decide who wins the conference.