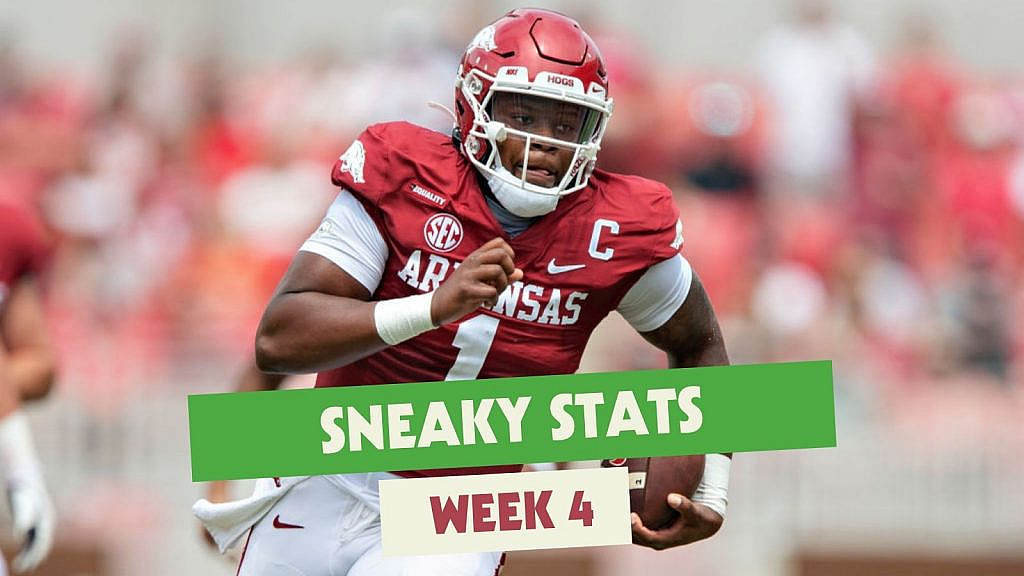 Welcome to back to the Sneaky Stats series! Week 3 provided us with some fun upsets, some faithful favorites thrashing their opponents, and dramatic, potential playoff implications galore. Let’s take a brief look at some fun stats from Week 3, then look ahead to some sneaky stats that could impact Week 4 action!

– First things first. The Ole Miss offense isn’t just good, it’s absolutely absurd right now. They absolutely crushed Tulane 61-21 and it could have been much worse had they not taken the foot off the pedal. The Rebels are somehow averaging 7 touchdowns and nearly 53 points per game. They’re also averaging 30 more yards per game than any other team in the nation. Yes, that’s partially due to pacing (second most plays per game), but they’re also top ten in yards per play. And yes, it’s partially scheduling because Louisville, Austin Peay, and Tulane aren’t powerhouse teams. But still, Ole Miss looks like perhaps the best offense in football with Matt Corral tossing the rock for 12.3 adjusted yards per pass attempt. Don’t be too surprised if Ole Miss upsets an Alabama team who struggled against Florida this past weekend.

– North Carolina got back on track roasting Virginia’s defense for 59 points. The Tar Heels are now third in yards per play behind only Coastal Carolina and Western Kentucky. Since their poor opener against Virginia Tech, Sam Howell is completing 70% of his passes for 330 yards per game while also racking up over 200 yards and two scores on the ground. Josh Downs has emerged as one of the best receivers in the nation with 399 yards and four touchdowns through just three games (leads all Power Five WRs in yards). However, the team’s going to need to find a second option through air if they want to maintain success. Downs has 24 receptions. No other Tar Heel has more than 6.

– Georgia’s defense is still the best in football after Week 3. Against South Carolina this weekend, they finally allowed their first offensive touchdown, but it didn’t come until the fourth quarter in junk time with Georgia already up 40-6. Yes, you read that right. The Bulldogs haven’t given up an offensive touchdown in the first three quarters of any game so far. And they’ve only allowed one offensive touchdown through three games. They’re allowing just 221 yards per game and sacking the quarterback once in about every dozen plays. No team allowed fewer than 275 total yards per game last year.

– There are three other teams that are in the top five in both defensive yards per play and yards per game allowed: Iowa State, Syracuse, and Baylor. None of them have played a murderer’s row schedule to this point, but all three teams like to play ball control (~40 rush attempts per game) and possess at least one or two all-conference defensive playmakers. All three should be good “under” bets down the stretch this season.

– Fresno State took down 13th ranked UCLA 40-37, bringing their total points per game against ranked opponents up to 32. How did they pull off the victory? They ran 91 offensive plays to UCLA’s 53, more than doubling the Bruins in time of possession with over 40 minutes to less than 20.

– After another 100-yard receiving performance against Toledo, the nation’s leader in receptions is actually a tight end right now. Trey McBride now has 30 receptions through three games. He accounted for 100% of the Rams receiving touchdowns last year too. Keep an eye on this rising star tight end amid the sea of boring, do-nothing players at the position.

– Speaking of highly productive players, five star true freshman running back TreVeyon Henderson kept the Ohio State offense afloat with 282 yards from scrimmage this past weekend and three scores. He now leads all true freshman in yards from scrimmage per game with 144 per contest. That’s 30 more total yards per game than second place (Jarquez Hunter, RB Auburn with 114).

– Lastly (and perhaps most interestingly), before we dive into Week 4, Alabama looked absolutely beatable against Florida. The Gators led the Tide in total yards and yards per pass attempt, more than doubled them in rushing yards, logged four fewer penalties, and even held the edge in time of possession. The kings of college football are looking mighty vulnerable early on this season!

This week marks the beginning of high-volume, in-conference matchups across the board. More than 30 games on this week’s slate are between conference opponents. That means the standings that truly matter will begin to take shape! Let’s dive in to some fun stats in some of the most important action this week…

Texas A&M and Arkansas rank 2nd and 8th in the entire nation, respectively, in yards per play allowed on defense. They both pace slowly and average a combined 81 rush attempts per game. If it were possible, this game would be a great bet to be the first in history to finish with a negative combined point total.

Yards per carry that West Virginia is allowing on the ground dating back to the beginning of last year. They were also the number one pass defense in the nation last fall. The Mountaineers are a bit softer against the pass in 2021 to this point, but their defense is going to give Oklahoma some fits this week. If you take out the Western Carolina game, Oklahoma is only averaging 7.1 yards per pass attempt and 4.7 yards per carry. Those marks would rank them 86th and 46th among FBS teams. Potential upset alert.

Clemson’s current rank among FBS schools in total offensive touchdowns scored through three weeks. When you mix that with the fact that NC State has only allowed three touchdowns in their first three games combined, this week’s matchup looks super scary for Tigers fans. Clemson’s also 114th in yards per game and 108th in yards per play. What’s sad is that those ranks include their matchup against FCS South Carolina State. This week’s outcome against NC State will define the rest of the season for Clemson.

Stanford’s point differential since opening the season with an embarrassing 24-7 loss against Kansas State, where they only managed 233 totals yards of offense. Since then, Stanford has turned it around, giving up zero turnovers on offense and averaging around 400 yards per game. UCLA, on the other hand, just lost to Fresno State, allowing 455 passing yards and 114 more on the ground. This looks like two teams trending in opposite directions.

The paltry number of yards per play (pass attempts, carries, and sacks) Jack Coan is currently posting for Notre Dame. To give you an idea of how terrible that is, he isn’t even in the top 70 FBS quarterbacks by this measure. Outside of a few throws against Florida State in Week One, Coan has been an absolute liability for the Irish offense. By comparison, Tyler Buchner, the freshman quarterback who should be starting right now is averaging 12.14 and offers incredible value with his legs. Wisconsin is averaging the second fewest yards allowed per game and will be the first real defense Notre Dame plays. After Coan falls apart in the first half this week against the Badgers, we should expect to see a fresh face at quarterback. Welcome to Tyler Buchner Week, everyone! We made it.

The percent increase in offensive efficiency when Hendon Hooker is playing quarterback for the Tennessee Volunteers instead of Joe Milton. Hooker was always the best quarterback for the Vols this off-season. He already had a 90th percentile passing efficiency season under his belt with incredible rushing upside. Tennessee actually has a chance against Florida this weekend thanks to the quarterback change.

The number of relevant statistical categories I could find where Texas has an advantage over Texas Tech right now. Yet the line still favors the (not even close to “back” at all) Longhorns by nearly 10 points. Total offense, defense, passing, rushing, first downs, every per play metric. Part of that is strength of schedule, but the Red Raiders have the edge just about everywhere thus far. The only area where Texas has been better is turnovers. The Red Raiders have averaged two turnovers per game, fumbling four times already. Texas only has one pick and one fumble. If Texas can win the turnover battle they may be able to cover, but don’t expect a blowout for the (once again) not even close to “back” at all Longhorns.