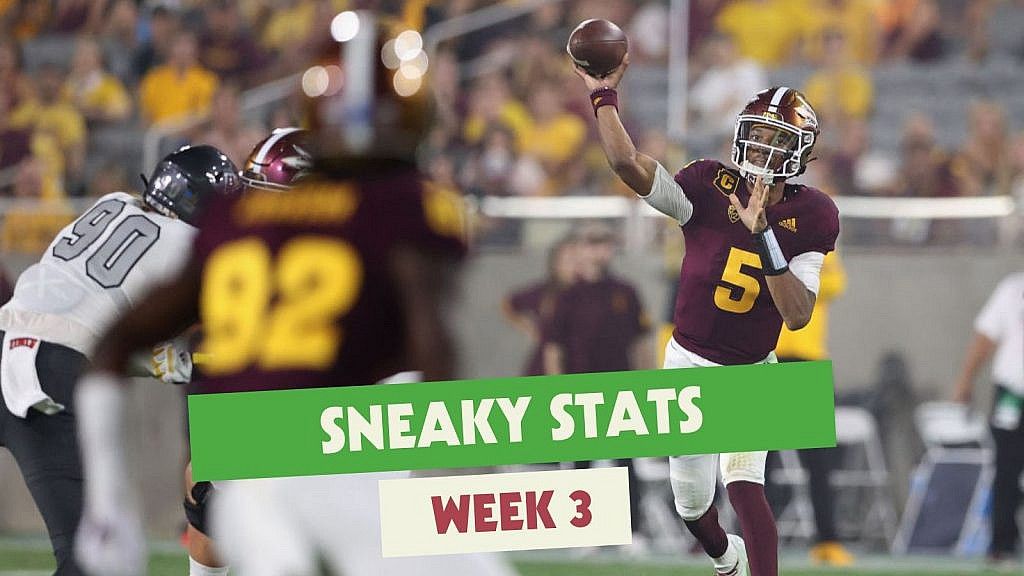 Welcome to back to the Sneaky Stats series! Week 2 provided us with some fun upsets, some faithful favorites thrashing their opponents, and plenty of dramatic potential playoff implications galore. Let’s take a brief look at some fun stats from Week 2, then look ahead to some sneaky stats that could impact Week 3 action!

– If someone would have said that Chris Olave, Garrett Wilson, and Jaxon Smith-Njigba would combine for 27 receptions, 388 yards, and three scores against Oregon, most might assume the Ohio State Buckeyes blew out the Ducks with ease. Nope. CJ Verdell and his 8.48 yards per touch propelled the Oregon Ducks to the upset victory, immediately throwing a wrench in the playoff picture. Let the chaos begin!

– Speaking of chaos, being a Florida State Seminoles fan must feel like a roller coaster of emotional highs and lows right now. They went from scoring 38 points on Notre Dame (barely losing in OT) to averaging just 4.6 yards per play and losing on a last second play to Jacksonville State. Yes, that is the same Jacksonville State team who just lost 31-0 against UAB in Week One. Yikes. Florida State’s duo of quarterbacks in McKenzie Milton and Jordan Travis are completing barely half of their passes and currently have more interceptions than touchdowns. Rough start.

– And speaking of rough starts, Stanford looked like a bad FCS team against Kansas State just a week ago. But this week they decided to score six times as many points (42 instead of 7) and nearly double their yards per pass attempt (10.2 instead of 6.5) by sticking with the good quarterback in Tanner McKee instead of the bad one in Jack West.

– How did Stanford turn it around? That defeated a sputtering USC team 42-28. The Trojans immediately proceeded to (finally) fire head coach Clay Helton. Who is Clay Helton? The man who took a perennial power house program and somehow managed a meager 19-14 record since 2018 and dropped USC’s average recruiting ranking almost completely out of the Top 20 in that same span. Not great.

– For the sixth straight time, the Cy-Hawk Trophy was awarded to the Iowa Hawkeyes. Iowa State’s potentially magical season and playoff run is basically over before it began. We probably should have seen this coming after the Cyclones only scored 16 points against an FCS opponent at home the week before. Brock Purdy was benched after throwing three picks and finishing off his horrific day with six negative plays in a row: incomplete, incomplete, run for loss of two yards, sack, sack, interception. Oh, and there was a Breece Hall fumble mixed in there too.

– Iowa on the other hand looked fantastic, at least on defense. They forced four turnovers, and allowed less than five yards per play against a team with playoff aspirations. That’s two wins against ranked opponents, but their offense is going to need to score a bit more if they want that to continue. They have four offensive touchdowns versus three defensive touchdowns through two weeks. Their seven takeaways ranks them third among all Power Five conference teams in takeaways per game.

– And lastly, before we look ahead to Week 3, let’s talk about the buyer’s remorse Texas must be feeling with their bid to join the SEC. Arkansas committed fully to stopping the nearly unstoppable force that is Bijan Robinson, and the Texas quarterbacks couldn’t win through the air. The Razorbacks had three defenders rack up at least 10 tackles stuffing the run all game long. And then, Arkansas had four different running backs log a rushing touchdown. Arkansas more than doubled the yards per carry of Texas (7.1 to 3.4). Texas still isn’t back.

Listen to our Week 2 Recap

This week is when the the college football season truly begins to take shape. Most teams begin to transition from dominating their cupcakes to facing off against tough divisional opponents. That, of course, leaves us with fewer games (only 73 FBS this week), but it also gives us some fun juicy matchups. Let’s dive in…

The number of yards per play that Florida’s fun, part-time quarterback Anthony Richardson has averaged on his 22 pass and rush attempts. Richardson has been taking every third drive or so for the Gators this season. His first play against USF went for a 75-yard touchdown to Jacob Copeland. His first carry went for 18 yards. Then, his second pass attempt went for another 41-yard touchdown, again to Copeland. Richardson is one of the most electric playmakers in the entire nation, yet Dan Mullen has relegated him to limited change-up action thus far. That likely changes this coming week when the Gators will need every offensive spark possible to even keep up with the Alabama Crimson Tide.

Total yards of offense that Cincinnati is allowing per game this season. Yes, they’ve played softer competition so far, but Indiana has struggled immensely with efficiency through two games. They couldn’t even average 5 yards per play against Idaho, who does actually have a football team, believe it or not. Cincinnati is averaging over 8 yards per play, 45 points per game, and 13 adjusted yards per pass attempt. Good luck, Hoosiers.

The number of defensive plays that Malcolm Rodriguez has made for Oklahoma State through just two games. He’s racked up 28 tackles, a pass defended, and a forced fumble from his hybrid safety & linebacker role for the Cowboys. Boise State has already struggled to do anything on the ground (only 70 yards per game). Rodriguez will likely be the key to slowing down the Broncos’ efficiency through the air and on the ground all game long this week.

Yards per play Auburn is currently averaging through two weeks. Yes, it was against Akron and Alabama State. They currently lead every other team in the nation by more than a yard per play. But, Penn State is near the top ten in yards per play allowed, and they have actually played teams with a pulse in Wisconsin and Ball State. We’re about see whether Tank Bigsby and Brian Harsin’s new Auburn offense is a real threat or not.

Number of 100-yard rushers for the Arizona State Sun Devils through two games. And that’s not even including Deamonte Trayanum, their stud sophomore, who was injured in Week 1. BYU just gave up nearly 8 yards per carry to Utah this past week. Even if BYU can slow down the run, Arizona State already has five players with five or more receptions who can win through the air, and a quarterback in Jayden Daniels with a 92nd percentile passing efficiency season on his resume. Could be an uphill climb for the Cougars.

Yards per pass attempt Fresno State quarterback Jake Haener is averaging through three games this year. Yes, UCLA is 2-0. And yes, they beat LSU last week. But they’ve been terrible against the pass, giving up almost 300 yards per game through the air. Fresno State might be a sneaky underdog pick this week given where strengths and weaknesses collide in their bout against the Bruins.

The percentage of the North Carolina offense accounted for by quarterback Sam Howell. Through two weeks, he has had to put the entire Tar Heel offense on his back. Not only has he accounted for all of the passing yards (of course, outside of a bit of junk time against Georgia State), he’s also the team’s leading rusher with 139 yards and two scores on the ground. After replacing nearly all of his rushing and receiving options from a year ago Howell is having to do it all. That could spell trouble for the Tar Heels again this week against a Virginia team that’s only giving up seven points per game so far.