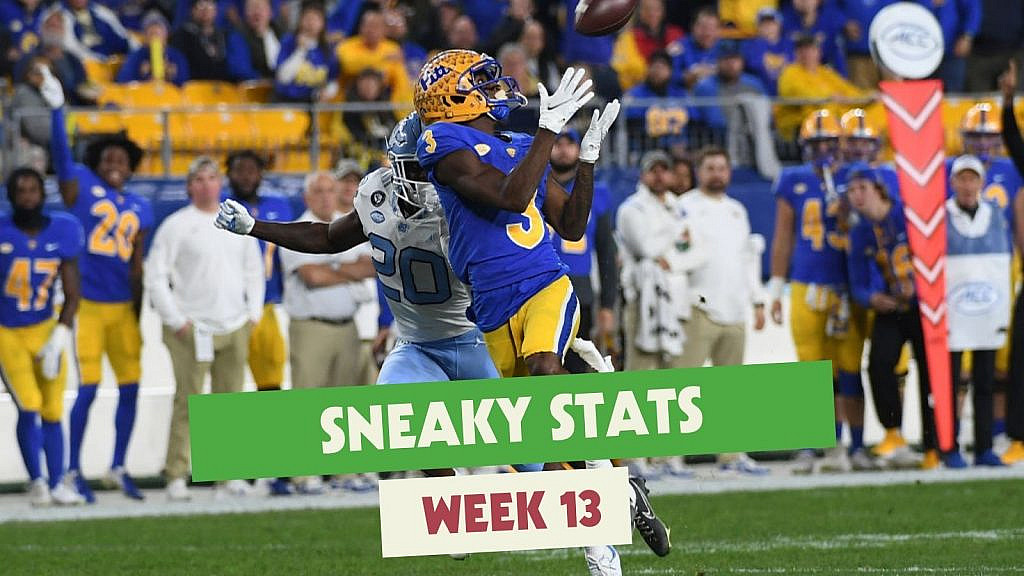 Welcome to back to the Sneaky Stats series! Happy Thanksgiving, everyone! Hope these Sneaky Stats find you well on this holiday Week 13 of the college football season! In Week 12, we saw 41 games decided by at least 14 points, two Heisman candidates throw for over 430 yards, another potential playoff team bite the dust, and so much more! Let’s take a brief look back, and then a look ahead at Week 13 and beyond.

– In case you missed it, last week, we talked about how terrible the Michigan State passing defense was. They were allowing the second most passing yards among all FBS teams in the last five years, which was already terrible. And then the Ohio State game happened. C.J. Stroud completed 29 of his first 32 pass attempts for 393 yards and six touchdowns in the first half alone! All three of the Buckeyes deadly receiver trio finished with at least 105 receiving yards and a touchdown. Michigan State is now officially the fifth worst passing defense in the history of College Football (in passing yards allowed per game)!

– My vote for the official theme song of the 2021 College Football Season is “Another One Bites the Dust” by Queen. And this weekend, I was hearing that bass line intro playing in my head before halftime of Oregon’s embarrassing loss to Utah. Oregon’s one consistent calling card had been their rushing attack (averaging over 225 yards per game coming into this week). They managed just 63 rushing yards. The Ducks hadn’t had a rushing total that bad since Week 4 of 2019. Utah, on the other hand, ran the ball 50 times for over 200 yards, completely controlling the game from start to finish.

– Jordan Addison had been dominating all year long for Pitt, but last week’s performance was one for the ages. Addison snagged 14 receptions for 202 receiving yards and four scores, including the game winner where he stole an interception away from a Virginia defender. Addison now leads all FBS receivers with 15 touchdowns, and he’s the first Pitt wideout to post over 1200 yards and 15 scores since Larry Fitzgerald. The only other ACC receiver to ever eclipse both 1200 receiving yards and 15 scores in a season? DeAndre Hopkins.

– This year’s Alabama team may have its imperfections, but Bryce Young isn’t one of them. Young set an Alabama record for most passing yards in a single game with 559 yards through the air. He totaled five touchdowns of 11, 20, 32, 40, and 79 yards. He’s now second in pass touchdowns per game (behind only C.J. Stroud of Ohio State) and third in yards per attempt (among passers with at least 200 attempts).

– It was almost like Malik Cunningham was playing himself in NCAA 14, trying to boost his stats in dynasty mode. Cunningham threw for 303 yards and five passing touchdowns and ran for 224 yards and two scores on the ground! And he did it on just 25 pass attempts and 11 carries! That’s 14.64 yards per play! “Video game stats” doesn’t even begin to describe this otherworldly performance in Louisville’s 62-22 win over Duke.

– Speaking of blowouts (for the fourth time in this piece already), the Michigan Maize and Blue blew the Maryland Terrible-pins away, 59-18. And to quote the great Dan Rubenstein, nobody loses like Maryland. This was Maryland’s third loss by at least 37 points and the third time they’ve allowed over 50 points in a game this year. They haven’t had a loss that finished closer than 17 points on the season. The combined score of their six losses is 100 points scored to 281 points allowed. Absolutely impressive losses across the board.

– Oklahoma State’s defense has been good all season, but they allowed a total of just 108 yards in their 23-0 thrashing to Texas Tech. There have only been four other instances all season where a team allowed 108 or fewer yards of offense in a game. Georgia and Wisconsin account for three of those four performances. If the Pokes keep this up on defense, they might just find themselves in the College Football Playoff.

Can you believe it’s Week 13? It’s the final week of the regular season! Let’s make this last full slate of Sneaky Stats a good one, shall we?

The 2021 Ohio State Buckeyes currently have the third most efficient offense in the history of College Football. They’re averaging four passing touchdowns per game since C.J. Stroud returned from his shoulder issue. They haven’t logged fewer than 469 total yards of offense in a game all season long. However, the Michigan Wolverines haven’t allowed 400 total yards of offense to any opponent at all this season. Will the Michigan defense be good enough to slow down the Buckeyes? Nope. Not a chance.

Oklahoma has seen a 37.2% drop in offensive efficiency over the last two games, compared to Caleb Williams’ first four starts where they averaged nearly nine yards per offensive snap. This absolute crumbling of the Sooner offense comes at a terrible time as they have to face off with Oklahoma State in the fierce Bedlam series this week. The Sooners have won 16 of the last 18 matchups in this rivalry, but Oklahoma State is the third best defense in the nation in both yards per play and yard per game allowed.

Mississippi State has scored 95 points in the last six and a half quarters of play. They scored 40 unanswered points against Auburn two weeks ago. 55 in Week 12. When we mix Mississippi State’s hot streak of offense with an Ole Miss team still averaging the fifth most yards per game on the year, we get a potentially incredible Egg Bowl game. 100 total points, incoming.

Notre Dame has allowed just nine total points in the last three games combined. Zero touchdowns allowed. Yes, the schedule was soft (Navy, Virginia, and Georgia Tech), but the Fighting Irish could be the one obstacle for a number of teams to get into College Football Playoff if they take care of business and destroy Stanford this coming weekend. The Cardinal ranks 121st in total offense on the year. 126th in November. Notre Dame could finish the year posting four games in a row without allowing a touchdown.

Since 2008, the Auburn Tigers have a win percentage against Alabama 3.91 times higher than the rest of Alabama’s opponents combined. Auburn is 4-9 in that span. Every other opponent? 14-164. However, every time since 2008 that Auburn has beaten Alabama, they have been ranked at least in the top 20. When Auburn isn’t ranked in that span, they’re 0-5 in this rivalry game, losing by an average of 27.4 points. This year’s Iron Bowl might get ugly.

Don’t look now, but Clemson is looking competent on offense. In the last four games, the obnoxiously bright orange Tigers have averaged 19.8 more points per game against FBS opponents than they did in their first five. Yes, they’ve played four below average defenses in a row, but they’ve improved their FBS offensive efficiency by nearly 20%. That’s a big jump. If they beat South Carolina (barely a top 50 defense by most measures), and then Wake Forest and North Carolina State lose, they could still win the ACC!

17-year-old true freshman running Braelon Allen now has seven straight 100-yard rushing games for Wisconsin. That has never been done by any other true freshman in the history of the Wisconsin football program! If Minnesota has any prayer of defeating the Badgers this week, they’ll have to find a way to stop the 6’2″, 238-pound juggernaut. On paper, the Golden Gophers look like they have a shot, since they’re allowing the fourth fewest yards per game in the nation. However, on a per play basis, Minnesota’s barely a top 25 crew against the run or defensively overall.

Desmond Ridder is averaging 320 yards per game and over three total touchdowns per game over the last four weeks. He also nabbed a receiving touchdown in last week’s immolation of SMU. While it is true that East Carolina hasn’t given up more than 300 total yards of offense to any one quarterback since September, and they’re currently on a four-game win streak, this should still be another easy opportunity for Cincinnati to assert their dominance.

Sneaky Stats for Week 12 of the 2021 College Football Season