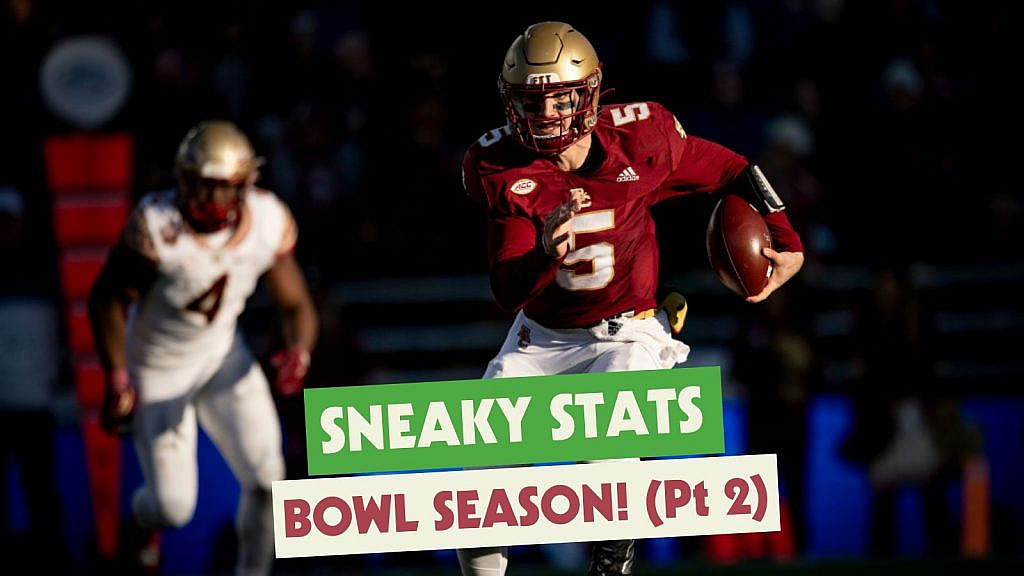 Welcome back to the Sneaky Stats series! We’re somehow already turning the page to the final chapter(s) of the 2021 college football season. Conference Championship games have been won. The College Football Playoff field is set. Another Alabama player has won the Heisman. Several Bowl Games are already in the books. But there are still plenty of fun matchups to dive into here in Bowl season! Let’s check out some sneaky stats that could be the difference in the second round of bowl games!

The Missouri Soft & Fluffy Tigers are the only six-win Power Five Conference team to allow over 225 rushing yards since 2017 Ole Miss. There were only two Power Five teams who gave up more rushing yards per game this year (Stanford and Kansas) and those teams had five combined wins. What does this mean? Even in neutral game script situations, Missouri found a way to get trampled on the ground all season long. That’s probably not going to work too well against Army, who only runs. Plus, running back Tyler Badie and quarterback Connor Bazelak, Missouri’s best offensive players, are both out of the Bowl game.

UCF has sneakily been one of the best defenses in the nation all year, only allowing 5.03 yards per play (ranked 21st). They have allowed more than 4.4 yards per play in just one of their last seven games. Florida, on the other hand, has allowed fewer than 5.3 yards per play just once in their last six, absolutely falling apart on defense. This could be an outright victory for UCF given we have two teams trending in different directions.

Believe it or not, it likely doesn’t matter that Hawaii is essentially the home team for their 9th Hawaii Bowl in the last 20 years. They’re just 5-4 in this island paradise bowl game. What does likely matter? They’re 127th in passing yards allowed per game despite playing only two competent passing offenses all season long in Fresno State and Nevada. Memphis is tossing the rock for 306 yards per game when Seth Henigan is the healthy quarterback starter. Not a great combination to give any real hope to Hawaii in Honolulu.

Now that Carson Strong has opted out of Nevada’s Bowl game against Western Michigan, the Wolf Pack is left with quarterbacks who have thrown just 24 passes in their combined college careers. Meanwhile, Western Michigan should be near full strength with a starting quarterback in Kaleb Eleby who put up the most efficient passing season in college football history just a year ago with over 13 adjusted yards per pass attempt.

Nobody plays YOLO ball at quarterback like Boston College’s Phil Jurkovec. His average depth of target (ADOT) is 13.9 yards. Is that a lot? Yes. It’s a full 4.4 yards above the average mark for passers with at least 50 attempts on the season. It’s ranked first among all Power Five Conference quarterbacks. He’s only completing 54% of his passes, but when they do connect, they’re typically for big plays or interceptions. This entire game will likely come down to how successful Jurkovec’s erratic style of play is against East Carolina’s very average pass defense.

Houston has the sixth ranked defense in yards allowed per game this year. The second best Group of Five defense in the nation. Auburn is trotting out their backup quarterback, has lost four games in a row, and has only managed to surpass 380 total yards of offense once in their past four contests. It’s surprising Auburn is actually favored at all.

The only Group of Five defense better than Houston this year (on a yards per game allowed basis is Air Force. Yes, that’s partly due to their game-grinding, run-only approach, like all the academies (for some reason). But they have also just been fantastic, even from an efficiency standpoint, too. The Falcons have only been allowing 7.27 yards per pass and 3.21 yards per carry on the year. Louisville does have a fun dual-threat quarterback in Malik Cunningham that will offer a new wrinkle for them to defend, but his electric play hasn’t proven to be enough against even the mediocre defenses they’ve faced this year.

Texas Tech has (once again, to the surprise of absolutely no one) been one of the worst defenses in the nation against the pass, allowing 28 touchdowns through the air (tied for 120th). And they’ve done so against one of the worst passing schedules in the country with Kansas, Stephen F. Austin, Florida International, Kansas State, TCU, and West Virginia all on their slate. Now they get to face one of the most prolific passing attacks in the nation in Mississippi State. The Bulldogs have averaged over 460 total yards per game, and typically pass the ball around 54 times each week. When you mix that with the fact that three of Mississippi State’s losses were by three points or fewer (with post-game win expectancies over 50%), we get a situation where Texas Tech is just playing completely out of its league in this bowl.

Devin Leary has developed into one of the best passing quarterbacks in the nation. This was his second season finishing in the 90th percentile in terms of pass efficiency. He’s also averaging 2.92 touchdowns per game. UCLA hasn’t faced an efficient passing attack since Week 3 when they gave up 455 passing yards to Fresno State. This game should be a toss-up given all of the good matchups across their rosters, but if this game busts open in any direction it will likely be due to Leary’s pass efficiency proving too much for the Bruins.

If you like gouging your eyes out, then I highly recommend watching West Virginia versus Minnesota in the “Who Cares, Both These Teams are Gross” Bowl. They both average nearly identical marks of 5.5 yards per play on offense and do so by toting the rock a combined 81 times per game, and passing the ball poorly. If there is any edge in this game of unimpressive offenses, it is on the side of the Minnesota defense. The Gophers allow the ninth fewest points in the nation per game thanks to their commitment to terribly slow pace and run stuffing prowess.