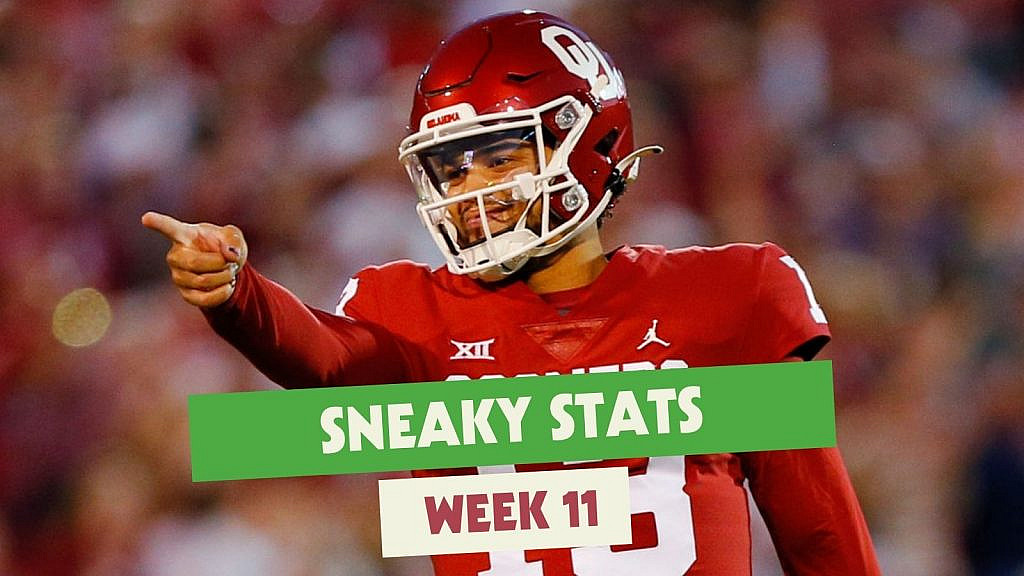 Welcome to back to the Sneaky Stats series! In Week 10, we saw Purdue take down yet another top five team, several glorious clunker games, and another week of Texas football failing miserably because that’s their official brand at this point. Let’s take a brief look back, and then a look ahead at Week 11 and beyond!

– Purdue knocked off Michigan State as the 17th top five ranked opponent that the Boilermakers have defeated in program history this past weekend. Unbelievable? To some, maybe. But the fact of the matter is that Michigan State now ranks 130th of 130 FBS teams in passing yards allowed. Even before the colossal failure against Purdue, they were ranked 127th. The Spartans’ 326.7 passing yards given up per game ranks as the worst mark of any FBS team in the last four seasons. Their winning streak was always going to end playing defense like that.

– In the most upside down, nonsensical, absurd “how in the world is this a game” kind of way, LSU nearly defeated Alabama last week. How? LSU’s injured, depleted secondary, which went into last week outside the Top 100 in pass defense, only gave up one play longer than 22 yards.  And LSU actually had three plays over that same mark, including a 26-yard fake punt play that ended up being the second longest play of the game. It was a 20-14 squeaky clunker win for Alabama.

– Speaking of clunkers, Ohio State struggled immensely with the 3-7 Cornhuskers. Nebraska’s post-game win expectancy was actually 51% given the two interceptions from quarterback C.J. Stroud combined with Ohio State’s least efficient effort on the year, by more than 20% per snap. Star wide receiver Jaxon Smith-Njigba did average 13.33 yards per target, but the rest of the Buckeyes are going to have to clean up their act.

– Speaking of win probabilities, the Washington Huskies were hovering somewhere around a 15% chance to defeat Oregon for most of the fourth quarter. But then, after the errant snap that soared out of the back of the end zone for a safety, their chances plummeted below 3%. This was Oregon’s sixth game that came down to one possession with less than five minutes remaining on the season. Anthony Brown is still doing just enough, hovering around the 50th most efficient quarterback in the nation. Will that be enough down the stretch?

– North Carolina finally handed Wake Forest their first loss on Saturday in the most North Carolina football fashion ever. The Tar Heels allowed 55 total points and nearly 600 yards of offense. They were down by 14 points with 11 and a half minutes to go in the fourth quarter, but of course scored 24 points in just over 6 minutes of offensive possession to end the game.

– I keep saying this, but speaking of absurdly efficient offenses that score in nearly no time, how about them Tennessee Volunteers? Tennessee’s first three scoring drives lasted 11 seconds, 26 seconds, and then finally a long, grueling march of 2 minutes and 43 seconds. Twenty one points and barely three minutes with the ball. Josh Heupel’s fast-paced attack helmed by Hendon Hooker is one of the best in the nation now. Hooker’s 10.3 Adjusted Yards Per Pass Attempt, mixed with his 21.4% rushing yard share for the Volunteers, gives him perhaps the most impactful (MVP-like) analytical profile among all Power Five quarterbacks in the nation.

– Utah is now the most efficient rushing attack in the entire nation after completely dismantling Stanford with 441 yards on the ground. They average 9.6 yards per carry, bringing their season average over six. In fact they are the only team in the nation averaging more than six yards per carry. Tavian Thomas and company deserve way more national recognition for their tremendous toting of the rock.

It’s Week 11, and by the time many of you read this, the second (likely polarizing) College Football Playoff rankings will be revealed. So of course, again, we’ll be diving into the sneaky stats that may have an effect on some potential playoff teams (even Cincinnati, despite them having a 0% now because the committee hates the G5’s face). But don’t worry, we have a few nuggets for some of your teams who might be on the outside looking in!

Caleb Williams is redefining what we thought possible for any true freshman quarterback. He’s still averaging 10.5 yards per play this year! That is the most efficient true freshman quarterback performance in the history of college football. However, the average defensive rank of opponents he’s faced this is season is 105th. Baylor comes in with a top 50 defense by a few different metrics. The Bears could be Williams and the 8th ranked Sooners’ first real challenge in several weeks.

We’re 11 weeks into this season and Georgia is still allowing only 6.6 points per game. However, the Bulldogs have only played one team ranked inside the top 40 in yards per play this season. The Tennessee Volunteers might just be the best team they have faced all season long (yes, this is somehow a real, non-satirical sentence). The Vols are a top 25 team in offensive yards per play and they’re ranked 43rd in defensive yards per play allowed. This could be the first close game of the year for Georgia.

The improvement in Notre Dame’s offensive efficiency over the past two weeks versus the rest of the entire 2021 season. It seems that the Fighting Irish are hitting their stride. Jack Coan has been less terrible. If the Irish want a fighting chance at a playoff berth, they’re going to have to finish out the year by winning in impressive fashion. Enter Virginia. The Cavaliers have allowed 106 points of offense in the last two weeks, and outside of their game against Duke, rank near dead last among all Power Five teams in defense. This one could get ugly.

When Purdue took down the giant that was the 2018 Ohio State team three years ago, the Boilermakers were 34% more efficient on a per snap basis than the Buckeyes. How? The Black and Gold held the Scarlet and Gray to just three yards per carry while averaging nearly double that themselves. They also possessed an elite NFL prospect at wide receiver who boosted their yards per attempt to nearly nine yards per attempt. And lastly, Ohio State had a quarterback who was quite reluctant to add yards with his legs. The potential formula looks nearly identical with all the same variables perhaps in play. Purdue’s top 25 defense, David Bell’s efficiency through the air, and C.J. Stroud’s complete reluctance to threaten on the ground could make this Saturday’s matchup quite intriguing.

The number of turnovers Washington State just forced against Arizona State in their most recent games two weeks ago. The Cougars have been unbelievably average in almost every single category all-season long, except when it comes to generating turnovers. They’re up to 20 turnovers forced on the year (tied for 5th in the nation). Oregon has had incredible turnover luck this year so far (ranked 10th in turnover margin per game). If there’s any regression to the mean there for the Ducks, they might waddle themselves out of the playoff.

Oklahoma State has allowed the third fewest yards per game (277, on average) this season, behind only Georgia and Wisconsin. On paper, they should absolutely destroy TCU this week. But I’m not sure anyone had Chandler Morris dropping 531 yards of offense against Baylor on their College Football Backup Quarterback Bingo card. If the Horned Frogs can put together another top tier offensive performance, they may end the Cowboys longshot at the playoffs.

Ole Miss ranks fourth in offensive yards per play. Texas A&M ranks 7th in defensive yards per play allowed and they’ve only given up 31 points over their last three games. Ole Miss is currently giving up almost 200 rushing yards per game on the year. Texas A&M has racked up at least 219 yards on the ground three games in a row. The Aggies should coast to victory as they’ll completely control the trenches all day long. They still need Alabama to lose at some point, but Texas A&M is our best remaining shot at a two-loss playoff team.

South Florida’s record over the past two seasons. They’re ranked outside the top 100 in run defense, pass defense, pass offense, offensive 3rd down conversions, explosive plays, and virtually every other meaningful statistical category. If Cincinnati doesn’t absolutely blow them out by at least three scores this week, their run at the playoffs will officially be over.

Sneaky Stats for Week 8 of the 2021 College Football Season