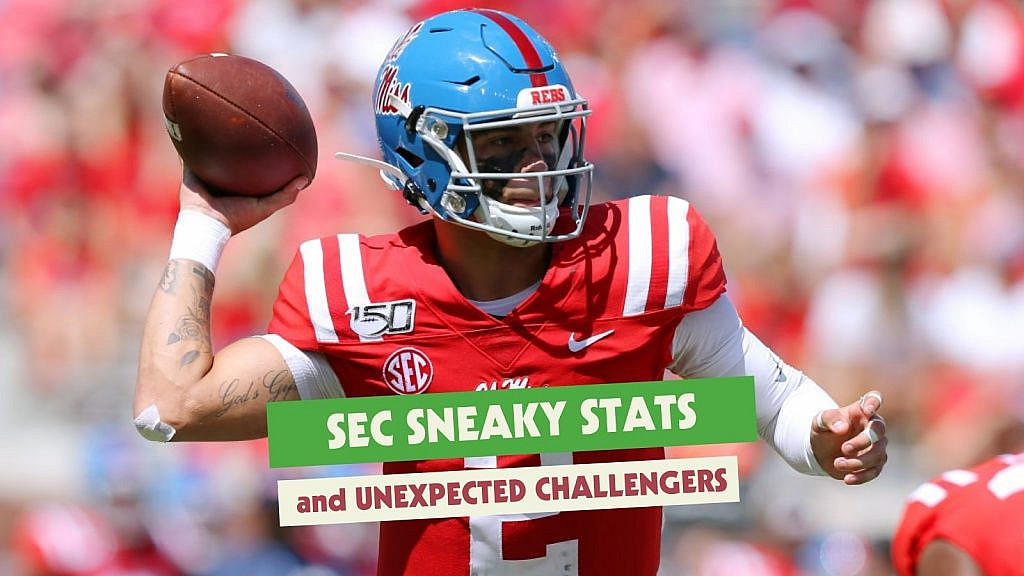 If you have already checked out the first two editions of this Sneaky Stats series (here or here), you may be noticing a pattern by now. There are quite a few intriguing, unexpected challengers in every single Power Five Conference this year who could rise to dethrone the king from its dominance. The SEC is no exception.

Don’t believe it? Let’s dive into it by the numbers.

Despite the common perception that Alabama is an undefeatable behemoth that only foolish SEC programs would challenge, recent history tells us otherwise. Yes, Alabama is coming off another National Championship, but they have actually “only” won the SEC six out of the last 11 years. LSU (Geaux Tigers!) & Auburn (War Eagle!) have won it twice; Georgia once.

And it’s not just those three schools who should be considered in the running most years either. Five SEC schools not named Alabama have averaged at least eight victories per year in the College Football Playoff era: Georgia, LSU, Texas A&M, Florida, and Auburn.

However, if we’re playing the history game, it’s also notable that only three SEC programs have defeated Alabama in the College Football Playoff era. Auburn twice (God Bless Gus Malzahn), Ole Miss twice (Swag Kelly deserves a medal), and LSU in the Joe Burrow year. The victories are rare, but if there were ever a year to try and topple the Crimson Tide, this might actually be the year to expect it to happen. How, and why, you might ask? Let’s dive in.

First off, Alabama has absolutely embarrassed the entire nation in terms of recruiting. They always have the best set of Jimmy’s and Joe’s on the field. But the rest of the SEC has been killing it on the recruiting trail, too. In fact, looking at the last five years (chart below), the “next best” of the SEC has essentially destroyed most of the country in recruiting with the exception of Alabama.

The first thing you might notice is that Georgia has actually brought in one more five star recruit than Alabama. They truly “have the horses” to challenge Alabama more than perhaps any other team has in the last ten years. You read that right. The Bulldogs have brought in 96 players rated as four stars or better without even including transfers like quarterback JT Daniels or the highest rated tight end in college football recruiting history, Arik Gilbert, now listed as a monstrous 6’5″, 248-pound receiver.

While it does look like there’s a big drop off after Georgia, the gap isn’t as steep as in every other conference in football. The SEC has six teams who have brought in at least 60 four and five star recruits in the last five classes. No other conference has more than three.

LSU, Texas A&M, Florida, and Auburn all have some serious fire power in the player personnel department with 60+ four and five star players brought in recently. LSU should certainly be the favorite of that bunch to bounce back after their disappointing 5-5 season a year ago. They’re actually number one in SEC against the point spread in the College Football Playoff era, covering just shy of 60% of the time. They’re also 30th in the nation in returning production with 20 returning starters, putting them in a prime spot to make some noise with Kayshon Boutte stretching the field and Derek Stingley shutting down the perimeter.

Texas A&M and Florida may be sexy picks to upset Alabama, but given they’re both replacing quarterbacks and numerous starters, the odds are bit lower.

Auburn has a quarterback who’s beaten the Tide recently, but they’re bringing in a new coaching staff. Despite ranking quite highly (among SEC teams) in returning production, they’re also more of a long shot.

But… if any team dethrones Alabama, what unexpected units from challenging schools might be the ones to help make it possible?

Georgia Offense – The receiving corps enters the season missing some key pieces (especially future early round draft pick George Pickens), but star tight-end-turned-receiver Arik Gilbert could offer up a weapon Alabama doesn’t have an answer for in the SEC Championship. Plus, if JT Daniels posts a full season of 98th percentile passing efficiency, it may present the best passing attack the Bulldogs have brought to the Tide’s table.

LSU Defense – LSU was wildly inconsistent on defense last fall. They allowed anywhere from 103 to 623 passing yards in a single game. They would give up 45 points to Missouri, but then hold Texas A&M to 20 points. However, they return their entire starting defensive line and best three defensive backs from a year ago. If they gel as a complete defensive unit, they might hold Alabama to the fewest points of anyone in the nation.

Ole Miss Offense – Let’s face it, Lane Kiffin is going to steal one against Nick Saban eventually. It might as well be in a year where Alabama is replacing back to back first rounders at quarterback and Ole Miss brings back the most returning production in the entire SEC. Matt Corral is likely the best overall quarterback in the SEC. Despite his two colossal meltdown games, he still managed near 90th percentile passing efficiency numbers and accounted for over 20% of the Rebels’ rushing yards. When you mix that with one of the best returning running back tandems in football with Jerrion Ealy and Snoop Connor, this unit could give us the biggest upset in college football against the Tide come October.

Texas A&M Offense – A&M is replacing their quarterback, but they also return over 2500 yards from scrimmage at the running back position between Isaiah Spiller, multi-positional threat Ainias Smith, and Devon Achane. Not to mention their top-three-in-the-nation tight end in Jalen Wydermyer who accounted for over a quarter of their receiving offense last fall.

Florida Offense – The Gators are also replacing their quarterback, but they’re doing so with a dual threat that Florida hasn’t had in years via Emory Jones. We just don’t know how good he’s going to be as a passer. Given Dan Mullen’s track record, the sky is the limit.

Auburn Offense – Bo Nix enters his 750th year as the starter for the Tigers, but that’s not what scares people with Auburn. Tank Bigsby might already be the best running back in the nation coming off a true freshman season with over 1200 all-purpose yards in 2020. Since 2014, Bryan Harsin gives his lead back an average of 23 touches per game, which bodes well for Bigsby. He could pull a 2017 Kerryon Johnson and just will the Tigers to victory.

Just like the other conference previews in this series I pulled win totals from six different sources to create an aggregate projected win total rounded to the nearest half-win to find potential values to target this season.

The SEC has averaged six, eight-win teams in the College Football Playoff era. That should hint that there’s a good chance one of the teams in the seven win range is a team to target. Kentucky and Missouri are pretty terrible bets given the pedigree and depth of personnel returning. Ole Miss and Auburn should both be in consideration given recent history and trends, but the Rebels are where the real value lies. Three non-power five opponents, Arkansas, and Vanderbilt on the schedule certainly helps too (despite Liberty looking tough).

LSU also has way too much talent to assume their floor is below eight wins this year. Alabama, Florida, Texas A&M will be the three games they aren’t surefire favorites to win. All three of those opponents are replacing quarterbacks.