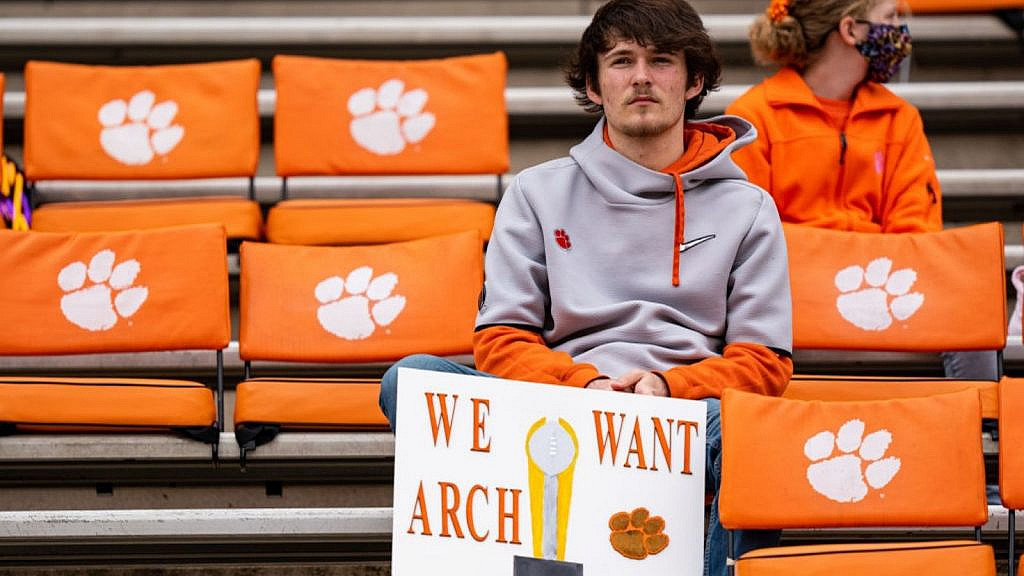 Disappointment. The excruciating nexus between hope and reality. Between possibility and probability. Between 7-5.

Regardless, it’s easy to feel like the college football gods have conspired against you in particular. However, you might realize you don’t have it so bad after all once you read these testimonials from the actual, undisputed most disappointed people in college football.

On November 8 when Nebraska athletic director Trev Alberts announced Scott Frost would still be the Huskers’ head coach in 2022, a subtle pop! could be heard echoing across the Great Plains. Some people say it was the sound of several laptops slamming shut in frustration. But I know it was really a dozen hearts breaking in unison.

You have to understand, “Nebraska parts ways with Scott Frost” was gonna be a lot of guys’ big break. Me, I’d been chasing that story for years. Interviewed players, assistant coaches, Scott Frost’s proctologist — which was a little weird but extremely insightful — all that hard work, ripped away like an Adrian Martinez fumble.

The head of brand marketing at Raising Cane’s Chicken Fingers

I’m sure everyone’s tired of hearing it by now, but 2021 has been absolutely brutal for the higher-ups at major fried chicken chains in the southern United States.

Week 1, you’ve got JT Daniels and DJ Uiagalelei, two proud Zaxby’s athletes, squaring off in the game of the week. Next thing you know, DJ’s the 12th best QB in his conference and JT’s hocking tenders from the sidelines. Meanwhile, here I am making Spencer Rattler the highest-paid backup in college football.

Y’all don’t realize how cutthroat this business can be. There’s a saying in the industry, “If you can’t turn a buck, you’ve said your last cluck.” Last night, a hired thug showed up at my house and told me if I didn’t pay up soon, he was gonna come back and break my fingers. My juicy, irresistibly crispy fingers.

You might recognize me as the creative mastermind behind 17 slightly different pictures of a linebacker flexing in front of a red background. Maybe he’s holding a chain or a mallet; who knows? My creative genius has no bounds.

This season, our Twitter timeline is just a long string of losing scores superimposed over gray photos with the caption “Final.” Sure, occasionally I get to wish a player happy birthday. And thankfully, I was able to repurpose my #Fast and #StayHungry graphics for Yom Kippur. Still, it isn’t quite the same.

Right now I’m working on a post to commemorate the athletes’ academic excellence, and I’m struggling to find a way to make the team’s average GPA look better. Hopefully we have a photo of Tom Allen signaling for a 2-point conversion somewhere.

Every home game, DKR hosts 100,000 hungry Texans craving quality barbecue. The fine folks here at Stubb’s BBQ can’t give them that, but we can charge them a lot of money for the fourth-next best thing.

We thought 2021 would be great for business with DKR at full capacity again, but it’s barely shown up in the bottom line. The ‘Horns have a couple three-and-outs, the fans decide they’re tired of watching Casey Thompson throw checkdowns, and so begins the Mass Texodus.

For years, Stubb’s has been the pride of concourse 11, section 103. Now, we can’t sell so much as a cup of coleslaw beyond the first drive of the third quarter.

Oh, in case you were wondering, business is booming at Bevo’s Beer Garden.

Look, I’m not angry with Purdue, I only wish they’d show us a little more attention. One week, they’re lighting up No.2 Iowa, the next they’re rushing for -13 yards and turning the ball over to our defense five times. Is it so wrong to want to feel wanted?

I guess it’s my fault for getting my hopes up. We hear all about how an unranked Purdue has beaten 17 top-5 teams, but that requires a couple criteria. Yeah, you have to play a bunch of great teams and all, but you also have to be unranked, like, all the time.

I just don’t get it, man. How many fullbacks do I have to start for you to see the raw sex appeal of the Wisconsin brand?

A Michigan wide receiver whose name we forgot but definitely still exists. Right?

Last week, I saw I was listed as a DB on the roster. I went to coach Harbaugh and told him about the mistake, but he said it was completely on purpose. Told me he was retooling the offense and ‘DB’ stood for ‘downfield blocker.’

I’ve started to forget what it’s like to catch a real football. Every day, I scour local parks hoping to stumble upon a game of two-hand touch. Hell, even a dad playing catch with his 10-year-old son. Anyone who can deliver a reasonably tight spiral into my cold, shaking hands.

The ESPN producer who works that one TV crew

I’m telling you, it’s not my fault one of the ESPN broadcasts looks like complete garbage every week. This thing goes all the way to the top.

Remember Oregon at Stanford? When we showed up, all of our gear had been replaced with Flip cameras and tape recorders. You try producing a four-hour football game using Apple iMovie.

That Monday, I brought it up with my boss and he said he’d make sure it wouldn’t happen again. Yet when I arrived to work the Arizona State-USC game, all I found in the truck was a broken View Master, a children’s sequin-encrusted toy microphone, and a note saying, “I lied. But who’s going to believe you?”

I saw your Twitter discourse about which offenses you were “high on” the other day, and I must say I’m deeply ashamed. All that talk about Ohio State and Oklahoma, yet the best you could do for the Group of Five was a vague allusion to Coastal Carolina? Maybe if you’d actually watched the games instead of skimming the box score like an utter casual, you’d know that not only does Marshall rank 11th in net yards per play, but freshman quarterback Grant Wells is quietly emerging as one of the nation’s most efficient passers. But of course you didn’t know that, you Power Five shill. Please do some research the next couple weeks so you don’t embarrass Peepaw and I at Thanksgiving.