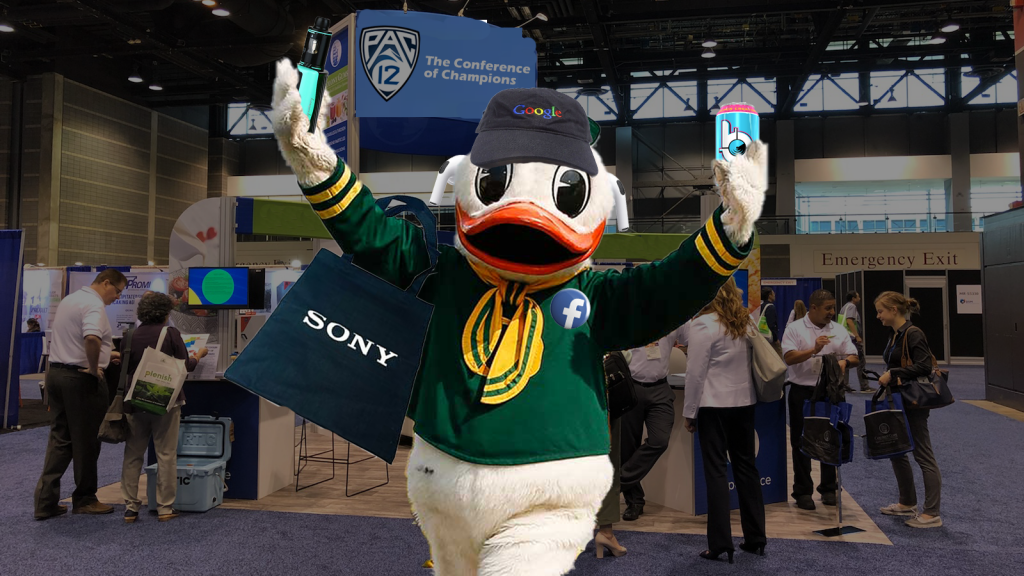 It’s no secret the Pac-12 is lagging behind the other Power 5 college football conferences. You know it, I know it, and most importantly, the sponsors know it. That’s why the Pac-12 called us in to revamp its brand, and it’s expecting results.

Nobody knows the West Coast and Silicon Valley better than we do. We are the spark that ignites the product launch. We are the whisper that emanates from the AirPod Pro jammed in the venture capitalist’s wax-caked ear. We are the face you dream of punching after our Tesla cuts you off during rush hour.

Let’s get down to business, people. Crack open a room temperature Blue Razz Bang Energy drink, huddle around this VR-enabled conference table (thanks, Zuck!), and pitch me on what we’ve got so far.

Merge with the Big Ten

Ever since Texas and Oklahoma announced plans to join the SEC, the word on everyone’s collective gag reflex is superconference. But where some see an existential threat to college football as we know it, I see big, beautiful dollar signs.

The Big Ten and the Pac-12 simply make sense together. It’s a lot like Nitro Bang — that’s one part Nitro Cold Brew and one part, you guessed it, Blue Razz Bang Energy — authentic, synergistic partnerships begging for hearty financial backing from any well-endowed investors currently reading this.

With the Big Ten and Pac-12 combined, every Saturday would be like the Rose Bowl. True, we definitely couldn’t use the term “Rose Bowl” for trademark reasons. But “nondescript football game featuring a prominent floral aesthetic in Pasadena” still rolls off the tongue, right? I can market that.

Maybe we absorb a smaller conference instead

Now we’re talking — it’s time to go vertical. And luckily for the bowl of noodle soup that is the Pac-12 North’s quarterbacks, I’m not talking about passing schemes.

For an easy value add, we could pick up the remaining Big 12 teams after Texas and Oklahoma officially leave. I’m constantly hearing about how Waco is quietly the Palo Alto of McLennan County.

Otherwise, if the Lil’ Eight decides it wants to exist independently without its top earners, there’s always the Mountain West. I view this as a win for everybody involved. Oregon State and Arizona already pay Mountain West schools to beat them nearly every year. Why not cut out the middleman and save a few hundred thousand bucks?

In the attention economy, eyeballs equal dollars. Fortunately, there are literally hundreds of streaming platforms to choose from. And for a modest stake in your revenue, we’ll tell you which one has the lone user interface that isn’t the digital equivalent of leprosy.

Of course, being an early adopter is risky. I should know. Two years ago I had the choice to buy a Mercedes or invest in Quibi during its angel round. Guess who drove here in a Prius.

Nevertheless, fortune favors the bold. Depending on how much of your soul is still intact, I’d wager Amazon would happily buy it off you. Alternatively, you could try to play the long game. Streaming sports via Twitch might seem silly now, but we’ll see who’s laughing when Twitch’s core demographic goes to college in nine years.

Schedule games when people will actually watch them

Can someone remind me why East Coasters are complaining about Pac-12 games starting after dark? Sleep is for the weak and the poor.

Then again, I can understand wanting to play the numbers. More viewers means more exposure, and exposure means expansion. So fine, let’s push the headliners toward the front of the slate. That’ll screw with a lot of my brunch plans this fall, but whatever.

Yes, the Big 10 already has noon kickoffs. You know what I have? A list of billion-dollar ideas, 15 minutes of sleep in the last week, and a blood toxicity level that would make Tiger Woods’ head spin — and you can thank a steady dose of patent-pending Nitro Bang for at least two of those.

I’m not totally sold, but I like where you’re going with the whole “investing” thing. Let’s circle back on this later.

A wise man once said coaches, not athletes, are the stars of college football. On second thought, I don’t think the guy who said that ever filed for a copyright.

Like I’ve always said, coaches, not athletes, are the stars of college football. Players graduate or go pro, but names like Kiffin, Swinney, Sarkisian, and Harbaugh linger in our brains. Notice none of those coaches are in the Pac-12. I mean, come on, how hard can it be to find the next Pete Carroll?

Bringing Chip Kelly and Herm Edwards aboard are great for name recognition, so kudos for that. No doubt those hires will look fantastic as soon as UCLA hits the elusive five win mark or Arizona State hires actual professional adults to run its athletic department.

Hmm, I’m not sure this is super scalable. I’m going to have to pivot on this one. Pass.

Beg former players to come back

You know what sells even better than an exciting on-field product? Nostalgia. The past is nearly as addictive as Nitro Bang — again, patent pending — and nobody is more hooked than college football fans.

Just look at USC fans. You’d think Matt Leinart was a god as opposed to a man who threw for fewer yards in his Heisman season than Matt Barkley or Cody Kessler in their junior years.

Are you seriously telling me Reggie Bush wouldn’t run it back with the Trojans and try to win his first-ever Heisman?

I hear what you’re saying — that can’t be legal. So? You think USC is going to care? That university proved exactly how powerful nostalgia can be when it made Aunt Becky famous again.

Accepting your regional and academic limitations and embracing a niche

What? No, obviously not. How many times do I have to say this, guys? If it doesn’t scale, we can’t monetize it. If you can’t profit immensely off of them, why even work with amateur athletes in the first place?

I guess we could just commoditize pretty much everything

At its core, college football is an experience, and the best experiences are the ones you can digitally immortalize and sell on a virtual marketplace. Who cares if the Pac-12 can’t crack the top four? Payoff beats playoff every day.

I want people placing bets on how long it takes Nick Rolovich to say another really dumb thing. I want Oregon fans mining for Duck Coin throughout the offseason. Until we find a way to turn Ralphie the Buffalo into a tradable digital token, I won’t be satisfied.

It’s not enough to watch the game; you have to gamify the game. That means blockchain. It means scarcity. If it’s even remotely fungible, I don’t want to hear about it.

Whatever. Quick swig of Nitro Bang should calm the nerves.