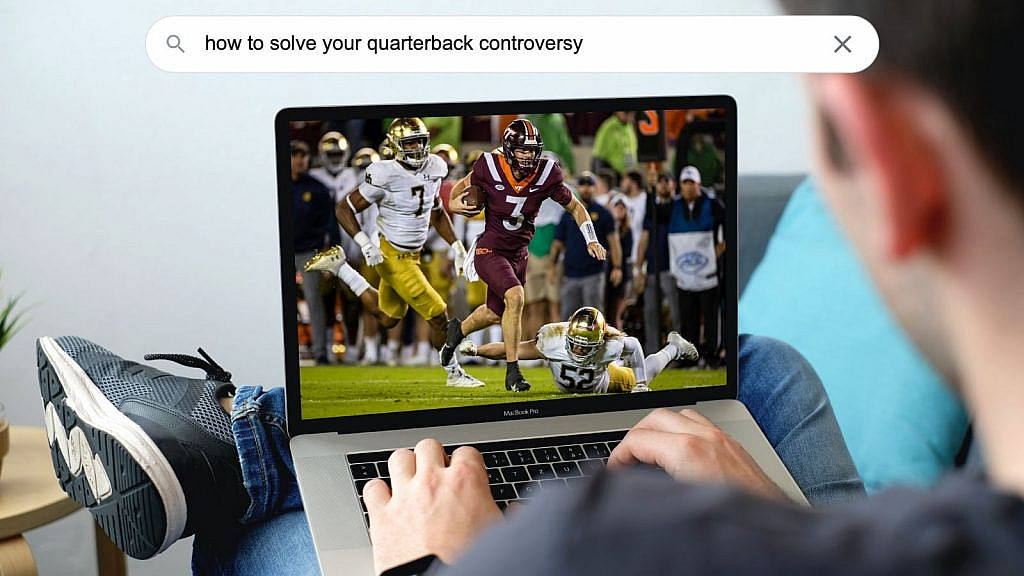 After six weeks of college football, we’re finally getting some answers to the questions that have perplexed us all season. However, some teams still haven’t circled a response to arguably the most important question in the game — who is your quarterback?

Unlike the majority of problems in college football, quarterback controversies aren’t deeply entrenched systematic issues with little hope of resolution. That’s why we’ve assembled 10 sure-fire tips guaranteed to settle your own troubles under center once and for all.

But I don’t have a quarterback controversy.

Yet. You don’t have a quarterback controversy yet.

It doesn’t matter if your first-string signal caller is a five-star recruit, the preseason Heisman favorite, and the projected No. 1 draft pick — Oklahoma, we’ll get to you later — there’s always a scrappy backup knocking at the door.

On the other end of the spectrum, as UConn’s 12 fans will tell you after seeing three different starters under center in 2021, it is entirely impossible to have a quarterback controversy when you barely have a quarterback to begin with.

If there’s anything 20-year-old dudes like more than feeling the pressure of an entire university upon their shoulders, it’s being told they need to do better by a man who bears a striking resemblance to his local used Honda dealer.

The key here is to be courteous. Use “I feel” statements and express your emotions without placing too much blame on the quarterback. Take notes, Clemson. Instead of saying “Hey, DJ, you’re playing like absolute balls. Get good,” reframe your criticism to focus on yourself.

Let’s try it out: “Hey, DJ, I was looking at your average QBR in 2021, and I feel like you’re playing like absolute balls. When you get the chance, do you think you could lower the balls quotient a smidge? Love you in the Dr. Pepper commercials, by the way.”

Tip #3: Shrug your shoulders and let the transfer portal deal with it

Look, we all know there’s no I in “team,” but there’s also no I in “four-year backup.” If you can’t convince your second-stringer he’s your quarterback of the future, there’s a good chance he’ll want to be the quarterback of the present somewhere else. Some people might call that behavior selfish or impulsive. Those people also probably call movies “talkies” and struggle to change channels with a “clicker.”

The point is, if enough players leave your roster, your decision will suddenly become much easier. Just think of how relieved Justin Fuente must have felt when Hendon Hooker ditched Virginia Tech. Quarterback controversy? Not when you have the Braxton Burmeister Six-Yard Special primed to launch at a moment’s notice.

Tip #4: Stand your quarterbacks on opposite goal lines, put your offensive coordinator at midfield, and see which end zone he runs to

This is the only foolproof way to determine which player he loves the most, effectively deciding the competition.

Tip #5: Eliminate the possibility of future controversy by completely throwing your backup to the wolves

If any doubts lingered as to whether Clifford was the top dog in Happy Valley, Ta’Quan Roberson silenced them with seven completions, two interceptions and 34 yards on 21 throws. In Roberson’s defense, it’s ludicrously unfair to criticize him for floundering against a Hawkeye secondary that somehow forces turnovers even more than I force strangled metaphors.

Expecting Roberson to save the day was like taking a first date to a Mexican restaurant, hearing him pronounce “pollo al horno” with a hard L and an even harder H, then suggesting he order the spiciest item on the menu. The man simply was not ready.

This won’t solve all your issues under center, but it will make evaluating your quarterbacks much easier during the offseason.

Well, goll-lee! Did you see how he stuck that right where his man needed it? Perfect zero-step drop, great extension, flawless followthrough. Now that’s a kid who can hand the ball off.

Notre Dame’s three-man quarterback room is like a worse-choreographed, much pastier version of Destiny’s Child. We’re all waiting to see who emerges as its Beyoncé. Thus far, each has shown something special that ultimately doesn’t matter behind a banged-up offensive line that might as well be a strongly worded email to the opposing defensive coordinator kindly requesting that his pass rushers refrain from folding the Irish quarterback in half.

Who will start for Notre Dame, who will come in relief when the starter struggles, and who will be stuck riding the pine? Last week, Jack Coan drew the starting job, Tyler Buchner drew the backup role, and Drew Pyne drew pine. And nobody had any idea if it was the right choice.

Tip #8: Try and fail not to get lost in Stetson Bennett’s eyes

You can tell yourself it’s only temporary. Once JT Daniels is healthy, you swear you’ll move on. But how long can you sit around waiting for someone who’s never available? To play football, I mean.

Suddenly, your offensive coordinator is coyly giggling to himself as he draws up special plays for Bennett late at night. How cute would it be if “The Mailman” dropped it off in the slot or hit a post route? The only option is to break things off now — don’t let the next delivery be a tortured love letter.

Contrary to what it seems, a quarterback controversy can actually be a privilege. Plenty of teams would kill to have two healthy quarterbacks at the same time regardless of competence. I’m sure USC would be happy to choose between Kedon Slovis and Jaxson Dart based on which one throws a tighter spiral as opposed to which one has more fully intact cartilage that week.

Tip #10: Whatever you do, never, ever let the backup anywhere near the Texas secondary

Well done, Oklahoma. You had a great thing going with Spencer Rattler — well, maybe not great or even particularly good, but this is the Big 12 we’re talking about — and you just had to go down 35-17 against Texas so Caleb Williams could swoop in and be the hero. Have fun picking between the No. 1 quarterback recruit of 2019 and the No. 2 quarterback recruit of 2021. Losers.

As for Texas, the Machiavellian mastermind who cursed its rival with such a burden, I offer a brief riddle.

In the Star Wars films, how does the Empire Strike?
What is Backstreet, when you rock your body right?
According to Sir Mix-a-Lot, what does Baby Got?
Finally, I ask you this — what is Texas not?