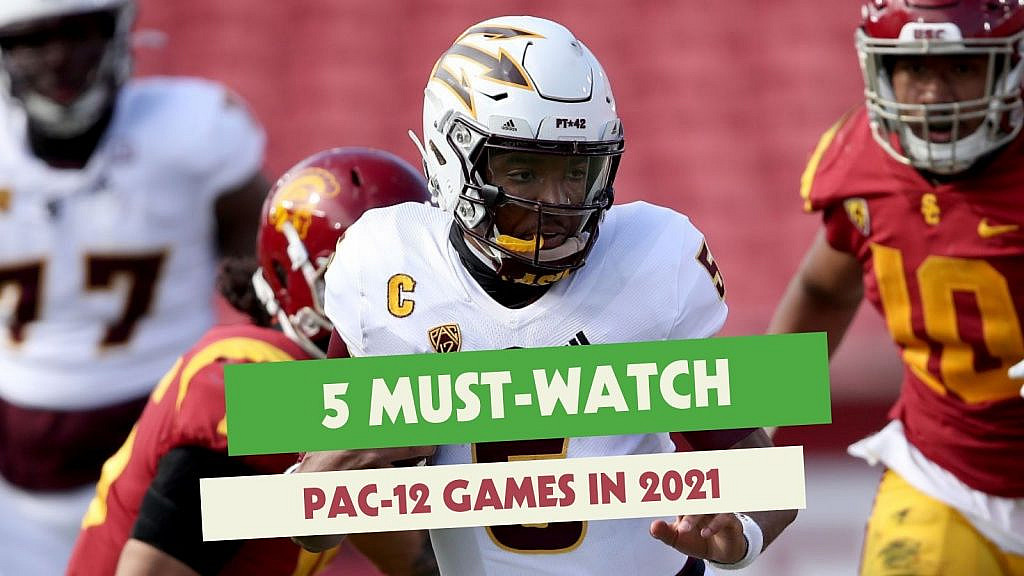 The conference of the West Coast is often an afterthought among the Power 5.  At least if you listen to the talking heads.

It’s time to face facts.  The Big 12 may be self-destructing, the ACC may be one great team amongst a pile of meh, but the Pac-12 gets zero respect from the wider college football world.

Sure, there’s the never-ending USC hype every year, and occasionally someone mentions Oregon or Washington if they’re good. But who actually watches the West Coast’s one true conference?  It’s on at weird times (#Pac12AfterDark, anyone?), and it devours itself every year, guaranteeing no Playoff representation. It’s not worth your time, so the pundits say.

But allow me to make the case, for a split second, that you should actually and consistently watch the Pac-12.

Consider this: A league that devours itself will have more than a few unpredictably close, exciting, hard-to-predict-when-they’ll-occur games every year.  Who cares if Playoff contention remains out of their hands?  A bunch of these teams are dangerous, and they’re a threat to ruin the lives of whichever squad stumbles into their crosshairs any given Saturday.

If you’re looking for great in-conference games, might I recommend two championship contenders in  Utah vs. USC (Week 6).  Or if rivalries are more your style, Washington vs. Washington State (Week 13) in the Apple Cup is always a ride, or USC vs. UCLA (Week 12) might pique your interest in the Rose Bowl.

But this year, the biggest matchups in the Pac-12 all involve out-of-conference opponents.

You might say this is a ding against the conference. Not so. This just means the Pac-12’s best teams are perfectly situated to cause absolute havoc among this year’s New Year’s Six contenders and perennial blue bloods.

So let’s take a look at the five best Pac-12 games you should watch this year!

I’ve already run down LSU’s strengths and weaknesses in my SEC preview. Max Johnson steps back in for an injured Myles Brennan to lead a Tigahs offense with solid receivers and dubious backs, and the defense should be much improved. Can DTR (known in longform as Dorian Thompson-Robinson) make them sweat? It’s a good bet. The Bruin line is rounding into form, with a great tandem of Brittain Brown and Michigan transfer Zach Charbonnet at running back. If DTR can make a stellar pass or two, the Tigahs could be in trouble. Watch out for linebacker Caleb Johnson to fly around making plays for the Bruin defense. This is a notable chance for a Pac-12 team to vault onto the national stage by beating a celebrated college football powerhouse.

This is a brilliant early-season tilt. The Buckeyes seem loaded for bear on defense, but the offense lacks certainty, even though it is immensely talented. The Ducks are no slouch for Ohio State to take on this early. They’re the big contenders for the conference title, even with an ongoing quarterback battle. The probable winner is Anthony Brown, noted Boston College transfer, and he should be bolstered by CJ Verdell and Travis Dye in the backfield, as well as a host of young, speedy receiving talent. And even though lots of folks opted out of last year’s abbreviated season, the defense returns experienced and hardy talent, especially in DE Kayvon Thibodeaux. Expect a top-flight matchup worthy of a bowl game.

It would be a real pity for Jim Harbaugh’s campaign to save his job to run into the fueled buzzsaw of anticipation that is the Huskies. Quarterback Dylan Morris did a good job amid awkward circumstances in 2020. And the job is his to lose in 2021. Around him, there is tons of promise at with Sean McGrew and Richard Newton sharing duties in the backfield, and a solid outlet valve in TE Cade Otton. If the offense steps up, the defense returns big-name experienced talent in linebacker Ryan Bowman and cornerback Trent McDuffie. The defensive issues last year boiled down to stopping the run. If they can tackle up front, the Wolverines better watch out.

It’s not my fault that the Pac-12 slate is so front-loaded with must-see matchups. This is another one, as Ty’s darling Sun Devils travel to Provo for an early season showdown with the Cougars. BYU always seems to have talent in the wings, and they might have the spiritual advantage, as the Sun Devils emerge from the sun-baked hell of Tempe to challenge them on their home turf. The Cougars are moving on after Zach Wilson went crazy in 2020 and was drafted No. 2 overall by the New York Jets. His replacement, it would seem, will be Jaren Hall, who last saw game action in 2019. While it’s a near certainty that Hall will not rise to the level of Wilson, his lack of reps makes it virtually impossible to game plan against him. Keep your eyes on this game, as Jayden Daniels leads an offense primed for a breakout year at basically every position. There aren’t many question marks. ASU led the conference in scoring and yards-per-play last year, and look ready to do so again. As for the defense, most players from last year’s top-flight squad return, with Jack Jones and Chase Lucas anchoring coverage. The Cougars could easily spoil the Sun Devils’ season early on. Watch and see.

Listen to our Pac-12 South Preview

The Irish are, once again, in a good position to contend for college football’s top honor. Jack Coan, noted Wisconsin transfer, commands a solid unit on offense this season, and the defense should reload nicely. Then there’s their longtime rival, the Trojans. Every year I hesitate to give the Trojans the benefit of the doubt, because they continually disappoint. But Kedon Slovis is back from an underwhelming season to headline an offense bolstered by Texas transfer Keaontay Ingram. The worry is the offensive line, which could either step up and provide good protection or fold and sink the Trojan’s conference title hopes. Let’s say the line steps up. The defense is loaded with talent, coordinated by Todd Orlando, and led by standout Drake Jackson at linebacker, who is a certified Dude. USC has the talent to knock off the Irish pretty much every season. To do so in 2021, the Trojans will have to pull an upset in Notre Dame Stadium.

That’s all until the season, folks! Follow me at @WatchingFB, and happy watching!