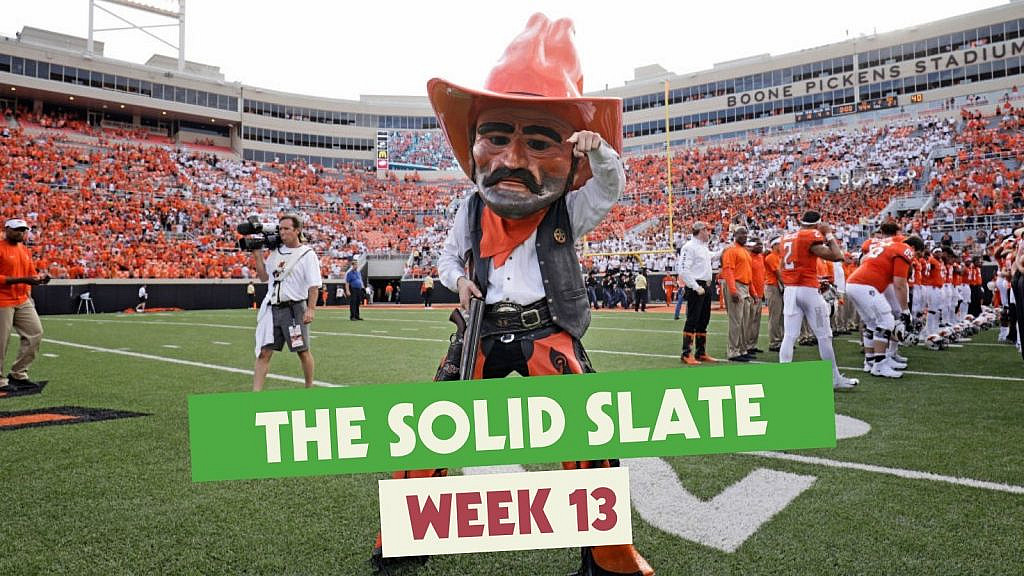 What’s your favorite cut of meat? (I promise, this will eventually go in a college football direction.)

There’s really no wrong answer. So many animals have tasty meat. And being hunter-gatherers, us humans have figured out so many ways to serve the humble animal muscle that it’s ridiculous. (Unless you’re a vegan, in which case, hey, good for you.)

But if you want to know what I think the best meat is, what the best meal is, it’s a meal with STEAKS. My friends, family, and loved ones all know that the true road to my heart lies through a well-seasoned, well-seared steak. Sirloin, strip, flank, ribeye, T-Bone, or the mighty porterhouse, it doesn’t matter. Steaks come in all shapes and sizes, and they instantly elevate any meal to banquet status.

That’s also true of STAKES. And no, not the ones you use to impale hapless vampires. I’m talking about that hard-to-define, know-it-when-you-see-it quality any meaningful matchup has. You can distill it down to one question: What’s on the line?

For most games this week, the answer is: not much! Postseason paths are mostly paved, with only a few turns left.

But some games have that glorious thing we call stakes. For some teams, if they win, they’ll get a shot to play on. Maybe in a championship game. Or a bowl. Or both!

Point is, if you see a game on the Solid Slate below and you ask yourself, “Self, why is this game here? What kind of harebrained writer is this Connor fellow?” Well, it’s probably there because that game has STAKES.

Our college football TV schedule gets off to an early start on Thursday! Soldier on through the placebo effect of your Internet-educated cousin telling you that turkey makes you sleepy and take in Ole Miss @ Mississippi State (7:30p/6:30p, ESPN), which is sure to be shenanigan-filled like most Egg Bowls. On Friday, take in a solid trifecta of games. The Horned Frogs strive for bowl eligibility in TCU @ Iowa State (Fri 4:30p/3:30p, FS1), then switch on a fun one in the ACC with North Carolina @ NC State (Fri 7p/6p, ESPN) and the always-intriguing Apple Cup featuring Washington State @ Washington (Fri 8p/7p, FS1).

The evening. Don’t get me wrong, Bedlam’s exciting. And if you can watch it, you should. But if you’re looking for a slot of time to work on the Great American Novel, or put up your Christmas tree with your family, or craft the greatest Thanksgiving leftover sandwich EVER? It’s the nighttime. Enjoy!

Ohio State @ Michigan (12p/11a, FOX) will determine who makes it to the Big Ten championship. The Buckeye offense is the best in the nation, astoundingly good at basically everything. But the Wolverines may have finally cracked the code to beating them. First off, Michigan’s defense is really, really good at limiting passing yards, so CJ Stroud could struggle. At that point, do you know what Ohio Stat really doesn’t do well? Defend the pass. If Cade McNamara has the game of his life, Jim Harbaugh could finally get that elusive rivalry win and an extension to boot.

Florida State @ Florida (12p/11a, ESPN) or Maryland @ Rutgers (12p/11a, BTN). Yes, I know I’m cheating, but most of you don’t have the Big Ten Network, so am I really? The winner of each of these games plays on. The loser goes home, slinking into the offseason’s depths. Which means some big stakes. Can the Gators shake off Dan Mullen’s firing? Their defensive stats and the Noles’ near-complete lack of an offense would suggest they can. What about the Scarlet Knights? Can they make their first bowl game in *checks Wikipedia* eight years? Wow, bet it’s felt longer than that. Their defense is decent, but if Taulia Tagovailoa finds some holes, I don’t think Rutgers’ very bad offense can keep up.

Alabama @ Auburn (3:30p/2:30p, CBS) is the stuff of legend most years, even when one team’s clearly better. And the Tide, as usual, are. But! Bama has shown flaws, most notably in their ability to (1) run the ball and (2) defend the pass. Say TJ Finley pulls some backyard football out, and the Tigers’ front seven come to play? Their defense does only allow about 130 yards on the ground a game. What I’m saying is this might be closer than you think. Maybe. Probably not.

Virginia Tech @ Virginia (3:45p/2:45p, ACCN) gets this slot, and believe me it was a tough decision. Check out the games below and make up your own mind. As I said in the intro, I like stakes, and this game has them. The big thing to watch out for? Brennan Armstrong commands the second-best passing attack in the nation yards-wise. Yet lately, the Cavaliers tend to lose no matter what he does due to defensive collapse. The Hokies do a great job in the secondary. Will history repeat itself, or can Armstrong finally pass for 300+ yards in a winning effort?

Oklahoma @ Oklahoma State (7:30p/6:30p, ABC) is huge. The Cowboys have their Big 12 title game slot locked up regardless of what happens here. And they would absolutely love to spoil the Sooners’ hopes and send them careening toward, I don’t know, the Alamo Bowl? Probably? OU has a more-pass-than-run approach to winning, but they’ve struggled executing the last few weeks. And their defensive unit is weak sauce, while OSU’s is tied for second to freaking Georgia in average points allowed. This will be a sight to see from the word “go”.

Texas A&M @ LSU (7p/6p, ESPN) boasts the Tigahs trying to make departing, disgraced ball coach Ed Orgeron proud by making a bowl. They rely on the passing game on offense, but the Aggies boast a stout secondary. And remember how I said OSU was tied for second in defensive points allowed? Yeah, they’re tied with A&M. LSU will need to dig deep to have a chance.

BYU @ USC (10:30p/9:30p, ESPN) is the only watchable thing here, and I say that with trepidation. The Trojans haven’t shown me any indication that they can perform this year, but this is their bowl game. Maybe they come in frustrated. Who knows. BYU doesn’t defend the pass too well, and if USC spreads it around in the absence of Drake London . . . like I said, maybe.

That’s all, Grayson McCall! Follow me here on Twitter if you want to, thanks for reading, and as always, happy watching!