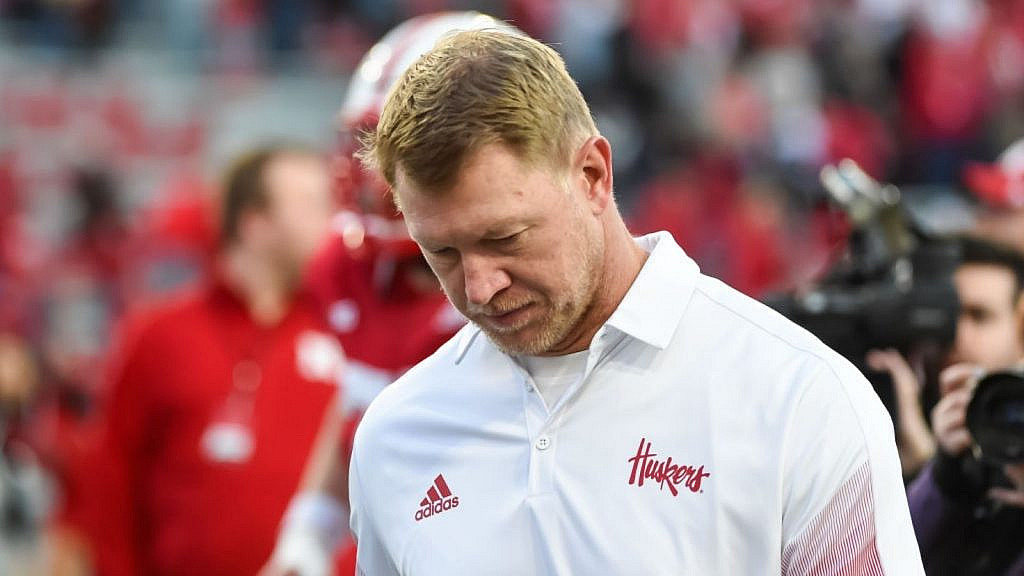 Congratulations! A totally nondescript former college football powerhouse in the American Midwest — let’s call it, oh I don’t know, Penbraskigan State — has hired you to be its head coach. Throughout your tenure you will face a variety of challenging, arguably impossible decisions. To fend off the bloodthirsty legions of fans and boosters, choose the “correct” course of action and follow the prompt to the corresponding chapter. Make sense?

It’s late May. You’ve arrived on the hallowed campus of Penbraskigan State University, home of the mighty Corncats. There’s only so much time in one offseason, so this summer you will prioritize…

It’s Week 4 and the Corncat defense is looking mean. The offense is also looking mean, but like, in a statistical sense. It is excruciatingly average. Junior quarterback Jake Sortagood is fine, but his ceiling is so low that even his noodle arm could hit it with a reasonably heavy projectile. Meanwhile, fans are begging you to start four-star freshman quarterback Hunter Brantley. Next week, you will…

Freshman quarterback Hunter Brantley has looked great when he isn’t throwing into triple coverage or getting pounded into the turf by defensive linemen. The offense might fare better under junior Jake Sortagood, but he won’t fix the ten penalties your squad has committed. After a particularly embarrassing loss to a Sun Belt team, reporters ask who you fault for the rocky start. You call out…

You scrape together a passable 6-6 season. However, your quarterback has grown like a sunflower in a damp closet. It might be best to move past long-time offensive coordinator Bob Chumsley. This offseason, you will…

Chapter 3B: Under Fire

Well, we certainly veered into the “blaming the 20-year-olds” stage of your career pretty quickly, didn’t we? The college football media heard your remarks and didn’t take kindly to them. Amid this whirlpool of public opinion, you will…

It’s your third year at Penbraskigan State. After a double-digit-win season and a couple bowl games, you’ve far surpassed what any reasonable fan could expect. The operative word being “reasonable.” Your seat is beginning to heat up, and it will only get hotter if you can’t take care of business tonight at Ohio State. The Corncats are down 27-23 on the Buckeye 45. It’s fourth and short with under a minute remaining. You need this win, and you’re going to get it by…

Chapter 4B: When Opportunity Knocks

It’s been years since you fired Chumsley. He just wasn’t the answer, especially not in big games. But also not really in medium or small games either, if you’re being honest. You’ve put together a perfectly respectable tenure at Penbraskigan State, which naturally means hordes of fans are calling for your immediate firing. Fortunately, athletic directors at other schools remember a time when the Corncats were the laughing stock of the Big Ten. You even have some interest from NFL teams. With this knowledge, you…

Chapter 4C: Freedom of the Pressure

Unfortunately, the press didn’t exactly buy your apology or any of the halfhearted displays of remorse you’ve offered since. After three seasons of showing more fight against the Corncat Daily News than your team does in most of its games, Penbraskigan State’s athletic department has every reason to fire you. Before you see your name at the top of an exposé in The Athletic, you…

On the bright side, your relentless pursuit of victory propelled you to a pair of 10-win seasons over the last five years. Alas, it turns out verbally berating your athletes isn’t conducive to roster stability. People are starting to call your program the doormat in front of the transfer portal. The athletic department was willing to tolerate your abrasive behavior when you were a threat to make the Playoff, but now you’re just a threat to those in your immediate vicinity. Luckily, there are plenty of old rich guys in the NFL who either don’t think you’re a complete sociopath or don’t particularly care. As the sun sets on your time in the Big Ten, you realize….

You choose to stay at Penbraskigan State. Doubts about your job security follow you in perpetuity. And? Who cares if you’re on the hot seat? So is everyone else in this conference. Frost is on the hot seat. Harbaugh’s on the hot seat. He’s a first-year coach, but you’re sure whatever chair Bret Bielema is sitting in right now is also a very warm seat. You relax in your cushy office and count your towering stacks of money.

You did it. You finally did it. Opportunity knocked, and you answered — Pac-12, here we come. Even if you don’t immediately succeed at USC, expectations and the athletic director’s refusal to admit he made a mistake should carry you for a couple seasons. On one hand, you’re still not totally sure you’re a great fit for the SoCal culture. On the other, you’re completely certain that you’re a great fit for these towering stacks of money.

When Kliff Kingsbury went 5-7 at Texas Tech, he had no idea he was blazing a trail for countless mediocre college football coaches with dreams of coaching in the NFL. You can’t wait to get started. You’re the rare hybrid between a former player and an analytical mastermind. A Mike Ditka in the streets; a Bill Belichick in the (spread)sheets. Best of all, you can use that time you would have spent recruiting high schoolers to instead count your towering stacks of money.

Well, that could have gone better. The official statement is you and the university mutually agreed to part ways. Right. Just like when you mutually break up with a girlfriend and you mutually delete your number from her phone and you mutually agree to drunk dial her late at night. Gotcha. Fortunately, Nick Saban has graciously offered you a position as one of his sorta-trusted analysts at Alabama. The salary isn’t amazing, but did I mention the $4 million buyout Penbraskigan State paid you when it absolutely fired you? Consider drying your tears with a bill from your many towering stacks of money.

Ah, the ol’ familiar Group of Five. For the next three years, you’ll dominate Conference USA on the arm of star transfer quarterback Jake Sortagood. Also, it turns out this school you’d never heard of actually has some seriously loaded alumni who figured seeing their alma mater go to the New Mexico Bowl was more important than fixing the water crisis a few towns over. This job isn’t necessarily a source of pride or personal fulfillment, but it is without question a great source of towering stacks of money.

When you said “screw the media,” what you meant to say was “screw the media that doesn’t say nice things about me.” This fall, you’ll headline FOX’s other, other flagship college football show alongside American sweethearts Clay Travis, Dan Dakich, and a robust panel of fellow disgraced former coaches. You quickly become one of the most reviled figures in sports media, a shame so great that it nearly distracts you from your towering stacks of money.

Not satisfied with where you ended up? Spoken like James Franklin himself. This game offers 25 unique paths to disappointment, so give it another go and see what happens!