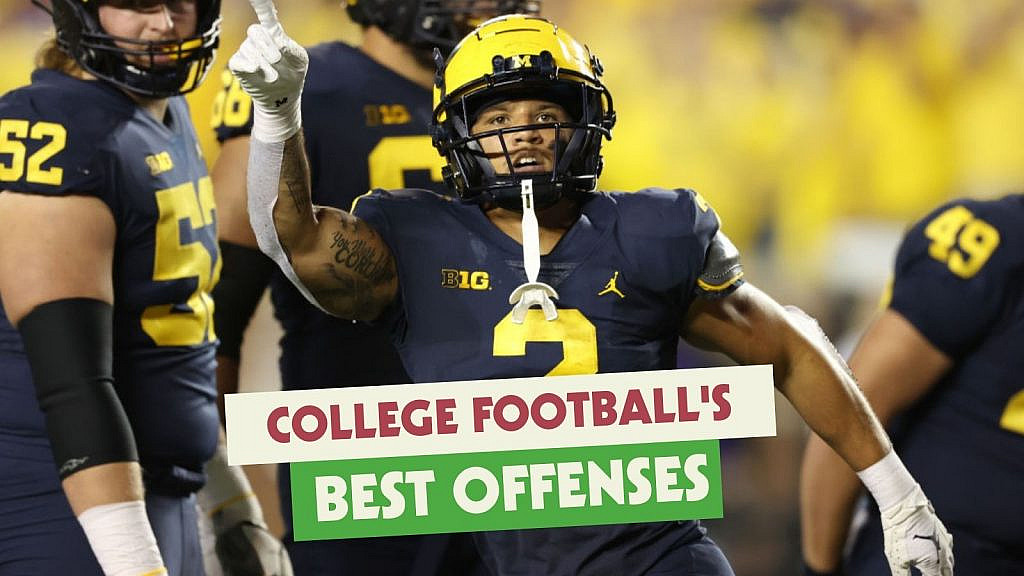 Going to college can be tricky. Be it clothes, textbooks, or your high school significant other, it’s easy to completely forget about certain things when moving in. As we enter Week Three of the college football season, it’s clear some teams left a few crucial items behind — specifically, their offenses.

Whether it was Clemson only mustering a field goal against Georgia or North Carolina Heisman hopeful Sam Howell repeatedly tossing absolute ducks into the Virginia Tech secondary, plenty of offenses have fallen short of expectations thus far in 2021.

Conversely, we’ve seen others revitalize their attack in unforeseen ways. Who knew you could shred Ohio State’s defense just by running directly up the middle every other play?

Rather than dwell on the negative, I’d like to celebrate the units that are finding their own unique methods to win. We couldn’t quite find enough full-on good offenses for a top 10, but here is an extremely definitive ranking of the seven best ones in college football right now.

As we understand it, football consists of three essential phases — offense, defense, and special teams. Kirk Ferentz, noted radical visionary, has made it his mission to whittle that list down from three to two. Offense? That’s nothing but five gorgeous linemen and a whole lot of wasted manpower.

The Hawkeyes’ defense has scored nearly as often as their offense — three touchdowns to four — through two games in 2021 while intercepting ostensibly competent quarterbacks a combined six times. Now, you might look at that statistic and ask the question, “Is that kind of havoc sustainable?” I, however, look at the Big Ten’s robust selection of roughly .75 consistently decent quarterbacks and ask the question, “Sure, why not?”

6. Whatever Notre Dame fans think is going to happen if the Irish start Tyler Buchner

It’s silly that we spend so much time trying to determine the best quarterback every year when the answer is obviously whoever Notre Dame’s second-stringer is that season. At least, that’s what a hundred proud alumni from a variety of schools not called Notre Dame will tell you.

Malik Zaire? You should see DeShone Kizer. Brandon Wimbush? Wait until Ian Book gets on the field. Jack Coan? Merely a placeholder for Tyler Buchner.

Every day, Notre Dame’s groundskeeper lives in constant fear of slipping up lest fans start calling for his replacement by a younger crew member who is admittedly pretty raw but looks like a natural on tape operating a zero-turn mower.

I can’t quite picture an elite Michigan offense. It’s like when humans try to imagine death or a new color. My brain simply shuts down as it attempts to conceptualize something for which it has no point of reference.

However, with the dynamic Corum starting at 60-80% of the offensive positions on any given play, I believe the Wolverines could at least have a watchable offense.

Obviously, the hang-up here is the quarterback position. Not just anybody can replace the 44 yards and zero touchdowns Cade McNamara posted against Washington. Even someone with Corum’s physical gifts would likely struggle to read complex coverages and fit throws into tight windows.

Fine, you win. As fantastic as Corum is as an all-purpose back, I guess he would only be, like, the fourth best Michigan quarterback this century.

Nobody puts Baby in a corner, but Baby never had to field a punt from one of these cannon-legged marksmen.

Illinois’ Blake Hayes and San Diego State’s Matt Araiza are the heart and soul — and sole — of their rosters. The pair has punted for a combined 1,700 yards, and one of Hayes’ boots even led to the first points of the FBS season, a safety against Nebraska.

The Aztec offense may struggle to move the ball, but after every unsuccessful third down comes a masterpiece. A tour de fourth, if you will. Meanwhile, as countless teams across the nation try and fail to implement an all-gas-no-brakes style of offense, Illinois is challenging that dogma and going no gas, all Blakes.

3. Georgia, as long as JT Daniels isn’t hurt, the wind is blowing approximately 13 miles per hour due northeast, and Jupiter is undergoing a triple Jovian eclipse

Sometimes it feels like the Bulldogs can’t catch a break on offense, but that couldn’t be further from the truth. In fact, they can catch multiple breaks — as well as fractures, tears, and, given time, probably an encephalopathy or two.

It blows my mind that Georgia has had Jamie Newman and multiple blue chip recruits in its quarterback room the past two seasons yet has started Stetson Bennet six times. Somewhere in an old equipment locker in Sanford Stadium hangs a framed photo of the university’s first football team, leather helmets and all. On the far right side, scribbled in the margin are the words “Inaugural Georgia Bulldogs football club, 1892: (From left to right) Johnny ‘Catapult’ Lewis, Jack ‘Mad Dog’ Murphy, Stetson ‘Also There’ Bennet…”

2. Any reasonably heavy object with forward momentum against the Texas defense

Last week, Texas versus Arkansas was what Zhou dynasty philosopher Han Feizi would have called a meeting between an unstoppable force and an extremely movable, fairly damp paper bag.

Arkansas running back Trelon Smith gashed the Texas defense for 75 yards on the ground, quarterback KJ Jefferson picked up another 73 with his feet, and running back AJ Green added 67 more.

Later that night, reports say a crumpled CVS receipt drifting through the parking lot of Razorbacks Stadium racked up some serious yards after contact when it plowed over multiple disgruntled Longhorns sauntering to the team bus.

It’s amazing how much hosting Kansas can open up your playbook.

Whatever you do, just please don’t play a single snap of zone coverage, OK?

The teams you picked to lose in your betting pool

Unfortunately, it’s the truth. Consult Football Outsiders, Bill Connelly’s SP+, or the Football Power Index, and the numbers will all tell you the same thing. The only reliable predictor of offensive explosivity and efficiency is, in fact, how much of your disposable income you — yes, you personally — wagered against that offense’s success.

Nebraska, as soon as Scott Frost has his guys in the locker room.

Truly, there was no more fitting victor in this assessment than the team that just fired its coach.

Once upon a time, USC was a hallmark of offensive excellence. Between Reggie Bush, LenDale White, and whichever future NFL career backup was handing the ball off to Bush or White, the Trojans were unstoppable.

Alas, the luster has long since faded. I remember those dominant squads about as well as the poor Stanford kick returner that got creamed by USC’s kicker remembers the last 24 hours. When I try, I just get a hazy blur of cardinal and gold followed by a throbbing headache. Then again, I don’t think that’s a particularly unique experience when watching the current Trojan offense.