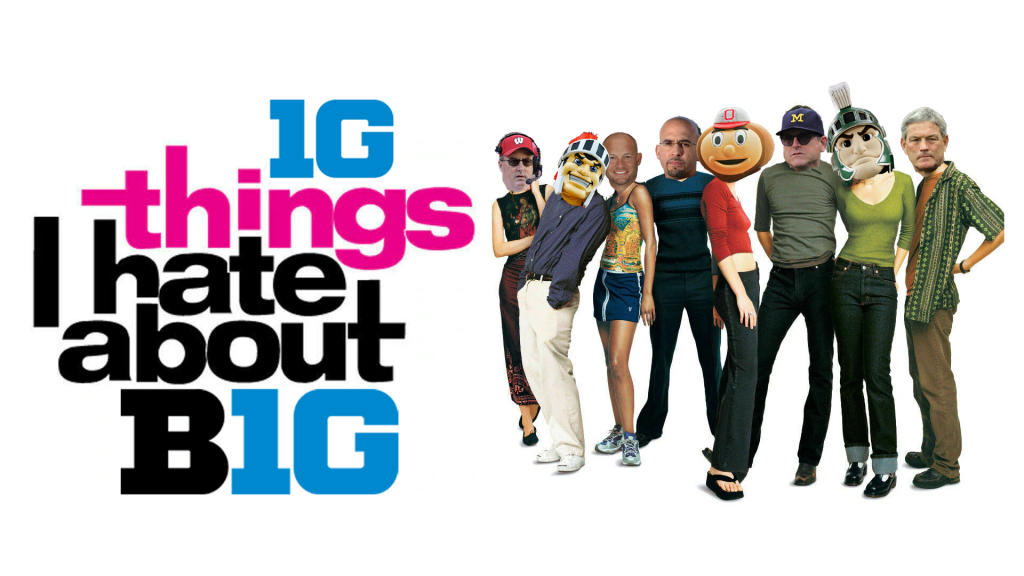 Raised in Ohio, I grew up watching primarily Big Ten football. As much as I enjoy the heartland’s premiere Power Five conference, it’s not always fun for us Midwesterners.

“Oh, for Pete’s sake,” we grumble in our outdoor voices, brows furrowed in mild annoyance.

As the 2021 season approaches, so do the Big Ten’s least charming quirks. Let’s take a page from Julia Stiles’ tear-jerking poem recitation in the 1999 classic 10 Things I Hate About You to better understand why, sometimes, I just can’t stand the Big Ten.

1. Adding Rutgers and Maryland because cash is king, baby

Complaining about conference realignment is as tacky and painfully 2014 as an Iggy Azalea song. That doesn’t make it unwarranted.

The Nebraska acquisition in 2011 didn’t bother me too much, mostly because the Big Ten sorely lacked a corn-based mascot. In contrast, for half a decade, Rutgers and Maryland’s sole purpose was helping Indiana toddle to five wins.

The result? Ohio State strolls to the conference championship against either Wisconsin or Northwestern, depending on which one has the less atrocious offense that season.

2. The biggest games starting at noon

I’m not going to rag on Fox’s Big Noon Kickoff crew. They are all very handsome men in nice suits who know a lot about college football.

If you’re attending the stadium, however, get ready for a bummer of a tailgate. Have you ever witnessed 12 college freshmen huddled around the trunk of someone else’s mom’s Chrysler Pacifica, downing ruby grapefruit White Claws at 10:30 a.m.?

I have. It’s arguably the most shame I’ve ever felt as a college football fan. And I go to Indiana.

3. Underdogs immediately following a huge win by laying an egg

This isn’t necessarily exclusive to the Big Ten, but let’s reexamine Purdue’s 2018 campaign for fun. Everyone remembers Week 8 when Purdue stunned No. 2 Ohio State 49-20. You may not recall the subsequent 23-13 loss to unranked Michigan State. What followed was a 38-36 upset of No. 19 Iowa, seven days before getting obliterated 41-10 by Minnesota. A win over rival Indiana concluded the Boilermakers’ regular season and sent them to the Music City Bowl, where they lost 66-14 to Auburn.

I love rooting for a dog, but it’s hard to get emotionally invested in a textbook Old Yeller.

4. Nebraska failing to live up to even one-fourth of its hype

Yes, I pity Nebraska. By the time I got into college football, whatever anabolic jungle juice that allowed the Cornhuskers to dominate the 90s had long been outlawed or adopted in other weight rooms across the country. Nowadays, it’s like head coach Scott Frost is caught in a twisted cycle of hype and disappointment. I can already see the future segments on ESPN’s College GameDay.

Will 2037 finally be quarterback Adrian Martinez’s breakout year? Kirk Herbstreit and a flash drive containing the downloaded consciousness of Lee Corso will break it down, right after these messages.

The work James Franklin accomplished at Vanderbilt and now Penn State deserves the utmost praise. But, yikes, he sure seems to enjoy making extremely questionable fourth-quarter decisions on primetime television.

Look, we’ve all had restaurant experiences in which we suffer a moment of panic and order something we instantly regret. Just be grateful there aren’t 106,000 enraged spectators bearing down on you the next time you crack under pressure and order a chimichanga when you know you really wanted the chiles rellenos.

6. Michigan State and Northwestern doing the absolute minimum to help their defenses

I am not immune to the charms of old school football.

My issue isn’t that Michigan State is borderline unwatchable for half of every game. It’s that the Spartans recruit NFL-caliber offensive talent yet don’t come within a country mile of matching their defensive production.

If I created a LinkedIn profile for Northwestern’s offensive coordinator, the first bullet point under “Skills” would read “sending 11 guys out on the field when coach Fitzgerald tells me to.”

OK, fine. It would probably be second after “proficient in Microsoft Access.”

7. Iowa simply refusing to be bad — or really good, for that matter

Average out the Hawkeyes’ record under head coach Kirk Ferentz in every pre-pandemic season and you get 7.71 wins to 4.95 losses.

I don’t dislike the Hawkeyes, but their unfailing relative competence frustrates me immensely. If you aren’t going to break out and win the conference, can you at least start sucking so I don’t get night sweats every time my team plays you?

Oh, well. I guess it’s nice knowing I’m not full of hot air when I say Iowa might be the most aggressively 8-5 program ever.

8. Making me sympathize with Jim Harbaugh and Michigan

Statistically speaking, if you root for a school in the Midwest, odds are you’ve been conditioned to despise Michigan. That’s why I’ll never forgive the Big Ten for making me pity the Wolverines every year during rivalry week.

Honestly, I should be cheering along with the Ohio State fans’ mind-numbing chants. Yet when I hear “O-H,” all I can respond with is “G-O-D” as in, “Oh God, Michigan’s really going to lose by 30 again, aren’t they?”

9. Everyone expecting it to be great, because there has to be a second-best conference

Ohio State is what we call a national powerhouse, a prestigious title given only to teams that can hang within five touchdowns of Alabama in a championship game. But beyond the Buckeyes, the conference doesn’t exactly boast many perennial world beaters.

Trust me, I have fond memories of fantastic Michigan State and Wisconsin teams. That said, I have slightly fresher memories of those schools battling Wake Forest in the Pinstripe and Duke’s Mayo Bowls.

Huge kudos to the Big Ten for making its personal brand of .500 so much sexier.

Ultimately, none of these nitpicks would get under my skin so much if I didn’t sort of love the Big Ten. There’s an undeniable joy in seeing P.J. Fleck row Minnesota to a brighter stage. I’m not super sentimental, but Tom Allen’s “Love Each Other” motto at Indiana always tugs the heartstrings.

Who could forget the thrilling, out-of-nowhere campaigns guys like Russell Wilson, Juice Williams, or Denard Robinson gave us?

I truly relish in watching Ohio State get blown out by complete juggernauts such as 2020 Alabama, 2016 Clemson, or 2017 Iowa. However, I also realize the Buckeyes are kind of the Midwest’s only clear and present hope for national relevance.

So what if I hate how it feels when Harbaugh fails or Nebraska’s hype train derails? I hate pretending the Big Ten is the SEC, and I hate all the mid-morning tailgates. I hate how Iowa won’t be bad, and it’s even worse that they won’t be great. I hate how the conference realigned, and I hate each Franklin fourth-quarter blunder. I really hate how the underdogs always find a way back under. I hate what the Spartans and Wildcats do every time they touch the ball. But mostly, I hate the way I don’t hate the Big Ten. Not even close, not even a little bit.

Not even at all.