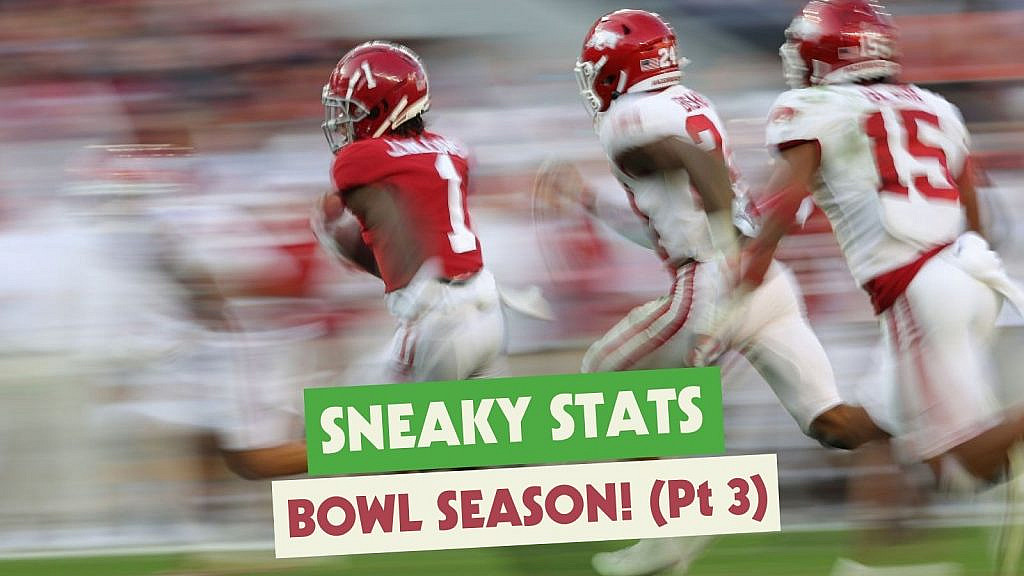 Welcome back to the Sneaky Stats series! We’re somehow already turning the page to the final chapter(s) of the 2021 college football season. Conference Championship games have been won. The College Football Playoff field is set. Another Alabama player has won the Heisman. Several Bowl Games are already in the books. But there are still plenty of fun matchups to dive into here in Bowl season, including the New Year’s Six games and the Playoffs! Let’s check out some sneaky stats that could be the difference in this final round of bowl games!

After tumultuous 2021 campaigns for both Clemson and Iowa State, there couldn’t be a more fitting Cheez-It Bowl matchup. Iowa State and Clemson both entered the year ranked inside the Top 5 in the AP Top 25 Poll. They both underperformed miserably given the expectations. But Clemson’s offense held them back like no other top tier team in college football. Given their defensive versus offensive efficiency, Clemson ranks 113th in a new stat I call “Yards Per Play Differential Over Expectation”. Essentially, it’s a measure of how badly a given team’s offense screwed their defense. Clemson ranked near dead last by this measure all season long. If they can’t get their offense going against Iowa State, it won’t matter how good their top five defense might be.

Oregon and Oklahoma fans, I know you all must feel like this season betrayed you. And that’s because it did. Oregon beat Ohio State early. Oklahoma had Caleb Williams looking like the best college quarterback of all time through his first four starts. There was so much promise. Now, all that’s left is an Alamo Bowl for these two once-great looking teams. The key will come down to Caleb Williams’ ability to beat a competent defense. He logged 2.05 times more yards per play against defenses ranked outside the top 100 than teams he faced with top 50 defenses. Oregon has a top 50 defense, easily.

The last time Purdue lined up to play an SEC team in the Music City Bowl, they lost 63-7. And that Purdue team was at full strength playing against an Auburn team with Jarrett Stidham slinging the rock around haphazardly. This Purdue team is missing its best two players in wide receiver David Bell and edge defender George Karlaftis. They face off with the most efficient Power Five Conference passer in the nation in Hendon Hooker. Tennessee should easily defeat the half-strength Boilermakers.

In a truly strange COVID turn of events, Rutgers has replaced Texas A&M in the Gator Bowl. That means they get to face Wake Forest’s high flying offense, one that outscores the Scarlet Knights offense by an average of 20.7 points per game. Yes, the Demon Deacons have a bad passing defense, but it’s highly unlikely that Rutgers quarterbacks (completing just 59% of their passes) will be able to do anything to keep up in this one.

Wisconsin and Arizona State, two typically decent, second-tier programs, combined for a whopping 22 passing touchdowns on the year in 24 combined games. That’s good for 0.92 pass touchdowns per game on average. Both Jayden Daniels and Graham Mertz were supposed to take the next step this year as passers, developing into future NFL Draft picks. That didn’t happen. So, what does that mean? This battle gets decided on the ground. Bad news for Arizona State. Rachaad White (their star running back) opted out for the NFL Draft and DeaMonte Trayanum (their second RB option) just transferred to Ohio State to play linebacker (seriously).

Both Penn State and Arkansas lost their top wide receiver to an early NFL Draft declaration and subsequent Outback Bowl opt out. Jahan Dotson and Treylon Burks both accounted for at least 42.9% of their respective team’s receiving offense. The victor of this game will need some playmakers to step up and make plays through the air. The edge here should go to Penn State with Parker Washington and KeAndre Lambert-Smith.

Iowa’s season has absolutely fallen apart since they started 6-0, barely edging out a Penn State team led by a backup quarterback that just transferred to UConn. Iowa is ranked 122nd in yards per play this season, but has actually been even worse than that over their last several games. Their quarterbacks haven’t completed over 50% of their passes in a game since the first week of November. They’re averaging 3.3 yards per carry on the ground. Kentucky is going to crush the life out of this already lifeless Iowa Hawkeyes team.

Kenny Pickett threw 42 touchdown passes this year. Jared Wayne, a wide receiver, threw one touchdown pass. Nick Patti, the starter for Pitt in the Peach Bowl against Michigan State, has thrown just 14 passes all season long and completed zero for touchdown passes. He hasn’t thrown a touchdown pass in a live college game since 2019. That inexperience may be enough to make Michigan State’s pass defense look slightly less than record-breakingly bad.

Unlike other college football teams with future NFL studs, Ole Miss is actually keeping two of their most important players on the field for the Sugar Bowl, in Matt Corral and Sam Williams. Corral accounts for 64% of Ole Miss’ total offensive yards. Williams accounts for 31% of the team’s sacks. Meanwhile, Baylor looks full strength, but Gerry Bohanon is coming back after missing the Big 12 championship game due to injury. This should be an incredible game, but the better players play for Ole Miss.

Despite colossally blowing it in the Big 12 Championship against Baylor, Oklahoma State still boasts the fourth best team in the nation in terms of defensive yards allowed per play. They have been a lock down defense all season long. Frankly, the Cowboys should completely outclass Notre Dame in receiver versus defensive back matchups. If Oklahoma State can stop Michael Mayer, a future first round pick, Jack Coan won’t do enough on his own to win the day for the Irish.

The Rose Bowl almost always gives us one of the best games of the year and the matchup between Ohio State and Utah should be no different. And despite any doubts surrounding Ohio State after losing to Michigan in the snow, they’re still averaging 7.78 yards per play. That’s nearly a full yard more per play than any other Power Five conference team in the nation. Utah’s been finishing on a bit of a hot streak, but C.J. Stroud should be out for blood after losing to Michigan and losing out to Bryce Young for the Heisman.

Last fall, offenses reigned supreme. But this year’s playoff field consists of four teams all ranked in the top ten in defensive efficiency. Yes, even Cincinnati. In previous years we’ve seen playoff games turn into shootouts. That’s not likely to happen this time around.

3:6 is the touchdown to interception ratio for opposing quarterbacks when targeting Cincinnati’s star cornerbacks Ahmad “Sauce” Gardner and Coby Bryant. Gardner has allowed zero touchdowns all year. If this deadly duo can find a way to take away Jameson Williams, Cincinnati actually has a chance. The last time Alabama was without a productive Jameson Williams was against Auburn (when he was ejected for targeting), and the Crimson Tide almost lost.

So, You Want to Join the SEC?

Welcome, new initiates, one and all. This is the Southeastern Conference, and we’re stoked to have you. At least, we’re stoked to consider you. We can’t let in everybody, obviously. With the fall season about to kick off, schools are rushing to find the houses that will give them the best chance to form lifelong ...

For over 25 years, the Big XII Automotive Group has served the southwestern United States with quality vehicles at affordable rates. From Oklahoma’s unparalleled horsepower to the premium luxury of our Texas classics, there’s something for everyone on our lot. Don’t believe us? Check out some of these reviews from our real customers…