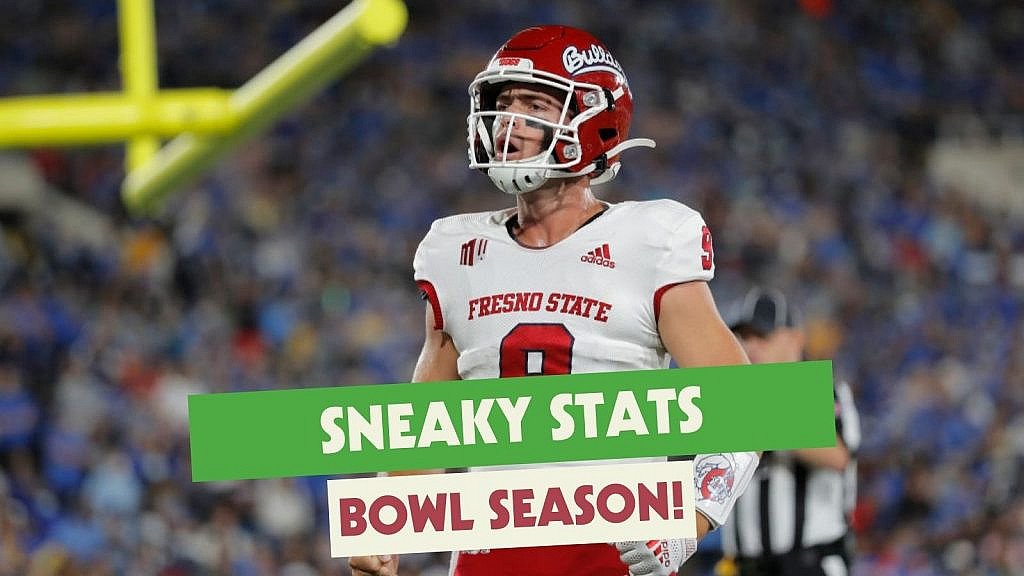 Welcome back to the Sneaky Stats series! We’re somehow already turning the page to the final chapter(s) of the 2021 college football season. Conference Championship games have been won. The College Football Playoff field is set. Another Alabama player has won the Heisman. But there are still plenty of fun matchups to dive into coming up with the start of Bowl season! Let’s check out some sneaky stats that could be the difference in the first round of bowl games!

The number of yards from scrimmage that Bryant Koback has averaged in his last five games for the Toledo Rockets. In that span, Toledo is 4-1, the only loss coming to Eastern Michigan who somehow managed to score 52 points. MTSU has a top 30 run defense, but their offense will not be able to keep pace for long if Koback starts stomping them early.

Northern Illinois was outgained in total yardage by seven of their 13 opponents so far this year. And if you look at their post-game win expectancy they should be a lot closer to a 4-9 team than the 9-4 team that they’ve somehow become. Coastal Carolina on the other hand has more than doubled their opponents in points per game and is coming off a game where they allowed a grand total of negative five rushing yards. The rushing game is Northern Illinois’ only area of strength. Chanticleers by 1000 points.

Fresno State has limited opposing quarterbacks to a 52.6% completion percentage (second in the nation) and just 45.3% over the last four games. UTEP is ranked outside the top 100 (by most measures) as a passing attack. They only have one real weapon in Jacob Cowing. Fresno State is going to completely shut the Miners down, and then Jake Haener (officially not transferring, now) will lead them to a multiple-touchdown margin of victory.

Despite being a very “run first” squad, UAB has been averaging 9.48 yards per pass attempt this season. That ranks them as the third most efficient passing attack (outside of super small sample passing military academies) in the nation behind only Coastal Carolina and Ohio State. BYU has been beatable on both the ground and the air this season. If UAB can shorten the game with their pace of play and hit a few, efficient long passes, this game should be one-possession late!

The number of interceptions Malik Willis has thrown in his last seven games. That’s an absurd stat for a quarterback who some consider to be a first round talent. And when Willis throws multiple interceptions (four games this year) Liberty is 1-3. That’s the only way Eastern Michigan’s could make it a game against Liberty. Eastern Michigan is giving up almost 200 yards on the ground where Liberty shows their best strength.

Oregon State has averaged 5.38 yards per carry this season and has the 12th most rushing yards per game. They were a top five rush efficiency team all season long until the final week against Oregon. Utah State has only faced two top 30 rushing teams this season in Air Force and Wyoming. They allowed over 350 yards against both of those opponents. The Aggies are about to be completely trampled by the end of the first half.

Louisiana is allowing just 16.7 points per game to opposing defenses since their opening loss to the Texas Very-Not-Back-Horns. In fact, they haven’t allowed more than 27 points to anyone since. By contrast, Marshall just surrendered 53 to Western Kentucky and 28 to Charlotte. Louisiana’s become a top 25 defense by most measures since November and Marshall has approximately 1.5 offensive playmakers who can do anything remarkable at all. Louisiana by a country mile.

Davis Brin has thrown a truly terrible total of interceptions (16) for Tulsa this season. That’s good for most in the nation. That’s the most any FBS quarterback has thrown since Jordan Love’s disaster of a 2019 campaign (with 17). Old Dominion might quite literally be good at nothing, but if they can win the turnover battle against the most turnover prone quarterback in the game right now they have a chance.

Kent State’s defense hasn’t been very “golden” or “flashy” this year despite what the team’s mascot might have to say. They’ve been on the field for 1003 snaps this year, third most in the FBS. And you might think, “Well, that’s just due to pacing.” Nope. They’re also ranked well outside the top 100 in yards per play allowed, against the run, and against the pass. Not great. Wyoming on the other hand has a top 40 defense by both raw totals and per play measures. Wyoming should be favored by 10 or more.

Both UTSA and San Diego State are top 12 rushing defenses this season. Both are dominant rushing offenses, too. But both can be beaten is through the air. If this game turns into more of a passing affair, advantage UTSA. San Diego State is ranked 113th in pass efficiency and 121st in yards per game. When they have had to pass this season they simply haven’t been able to do so. The Road Runners did have one “fall apart” game against North Texas, but they’re going to bounce back and crush the Aztecs.

I noticed today that the sun went down sooner. Almost every year, despite the pumpkins on every porch and the blow-up ghosts on every lawn, I forget fall is rounding into winter. That’s mostly because where I live, the weather decides to skip fall for the most part, snap-freezing into winter with alacrity. The climate ...

Raised in Ohio, I grew up watching primarily Big Ten football. As much as I enjoy the heartland’s premiere Power Five conference, it’s not always fun for us Midwesterners. “Oh, for Pete’s sake,” we grumble in our outdoor voices, brows furrowed in mild annoyance. As the 2021 season approaches, so do the Big Ten’s least ...