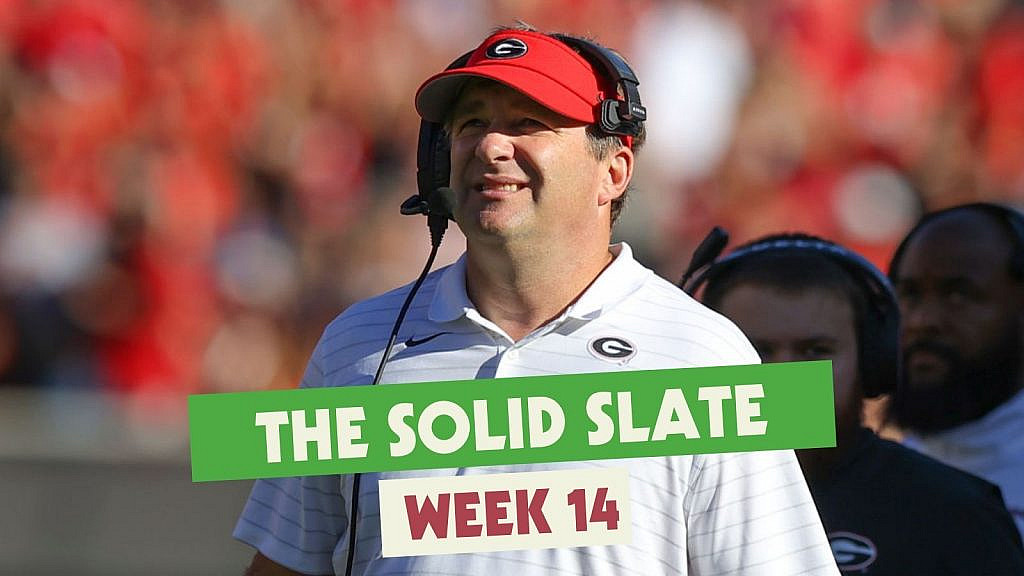 I spent Thanksgiving a week ago with my family. It was wonderful seeing everyone in person again, sitting around a big feast, laughing and talking about anything and everything.

Then, I sat at a feast of a different kind last Saturday, as Rivalry Week delivered in a huge way. Watching Michigan finally get a dub against the Buckeyes, tweeting my astonishment as Bama and Auburn delivered an Iron Bowl ending for the ages, and video chatting back and forth with the Solid Girlfriend as Bedlam lived up to its name.  (She didn’t have a TV where she was, so we had to make do.)

But even after gorging myself, all week long, college football’s been saying: “Here, have some more.”

On Sunday, the coaching carousel turned into a whirling dervish as Lincoln Riley okey-doked the entire sports media, zooming off to USC.  Then on Monday, Brian Kelly went full midlife crisis and bolted for LSU.

I haven’t been able to blink or stop shaking my head in bewilderment since. But that’s just the appetizer. Because do we ever have some stake-filled games this weekend.

Not many games, mind you. A few. But choice morsels all.  I’ll do my best to break down the Saturday schedule for Week 14 below.

But first, be sure to check out my Playoff Eliminator. I have a set of rules that tell me who’s going to be in the Playoff, and it’s done so correctly every year.  An article explaining the state of play is up here, and I’ll be providing regular updates all throughout Saturday.

On Friday, check out Western Kentucky @ UTSA (Fri 7p/6p, CBSSN), as Heisman contender (yes, I said it) Bailey Zappe leads Big Red and the Hilltoppers into *checks notes* the Alamodome? Awesome. Yep, the Roadrunners of UTSA have homefield advantage, still reeling from their undefeated season imploding against North Texas last week.  The Roadrunner defense vs. the Hilltopper offense is the matchup to watch.  Then, switch that over to your Small Screen and take in Oregon @ Utah (8p/7p, ABC), the Pac-12 title game emanating from Allegiant Stadium in Vegas. Don’t gamble on this one. Oregon and Utah have super similar offensive stats, and while Utah has a slight defensive edge, the Ducks looked like they came together last week on offense. Yes, the Utes thrashed them two weeks back, but I wouldn’t say a second win’s a sure bet.

None in sight. There’s only a little more of this wacky season left. I wouldn’t miss any more if you can help it. And there’s important games in every time slot here.

Baylor @ Oklahoma State (12p/11a, ABC) leads off the day as the only game of importance in this block of time. If the Cowboys win, they’re in the Playoff. I don’t see a way around it. They looked strong against the Sooners last week, but let’s be honest, Oklahoma’s kind of the cure for the common offense this year. Baylor’s far more formidable, except against the deep ball. OSU’s more a run-first team this year, though. So is Baylor, and their zone run gives opposing defenses headaches. This is by far the Bears’ biggest challenge this year. Expect a low-scoring slugfest.

Georgia @ Alabama (4p/3p, CBS) emanates from Atlanta, and its outcome determines Bama’s fate. Less so Georgia. Lose, and I think they’re still in. So this one just means more for the Tide.  Thing is, Georgia runs more successfully than they throw… and they have that top-flight defense to reckon with. This will get brutal and messy.

Houston @ Cincinnati (4p/3p, ABC) comes our way from Nippert Stadium, as the Bearcats try to cap off an undefeated season and perhaps become the first Group of 5 team to make the Playoff. Houston is a humongous roadblock, though. They boast the looniest Tune of all at QB and a strong defense to boot. If Cincy makes it past them, they’ll have done enough to compete for a natty, IMHO.

Michigan @ Iowa (8p/7p, FOX) is your Eyebrow Raising Game of the Week, because Iowa’s offense says they absolutely< should not be here. The Hawkeyes do literally nothing well on that side of the ball. Yet all year long, their brick wall of a defense keeps them in games and they win close ones.  But the Wolverines have a beastly defense too, especially up front. They might manhandle Iowa, and I’m sure Cade McNamara will be looking to test the one sorta meh component of the Hawkeye defense: the secondary. Or this one could devolve into three-yards-and-a-cloud-of-dust stereotypical Big Ten grindball.

Pitt @ Wake Forest (8p/7p, ABC) determines the ACC. No Playoff stakes in sight, but this should still be oodles of fun. For starters, no Clemson. How refreshing! Then you look at the numbers, and yeah, both of these squads just love to pass. But the Deacs defend the pass way better than they do the run. Pitt’s specialty is the run defense, so if they can just get Vincent Davis going on the ground, they might be able to balance out the absolute hail of passes Wake will rain down.

Sneaky Stats for Week 5 of the 2021 College Football Season

Welcome to back to the Sneaky Stats series! Week 4 was chock full with upsets, ugly clunkers, breakout performances, and most every team looking a little bad. Let’s take a brief look at some fun stats from Week 4, then look ahead to some sneaky stats that could impact Week 5 action! Week 4 – ...