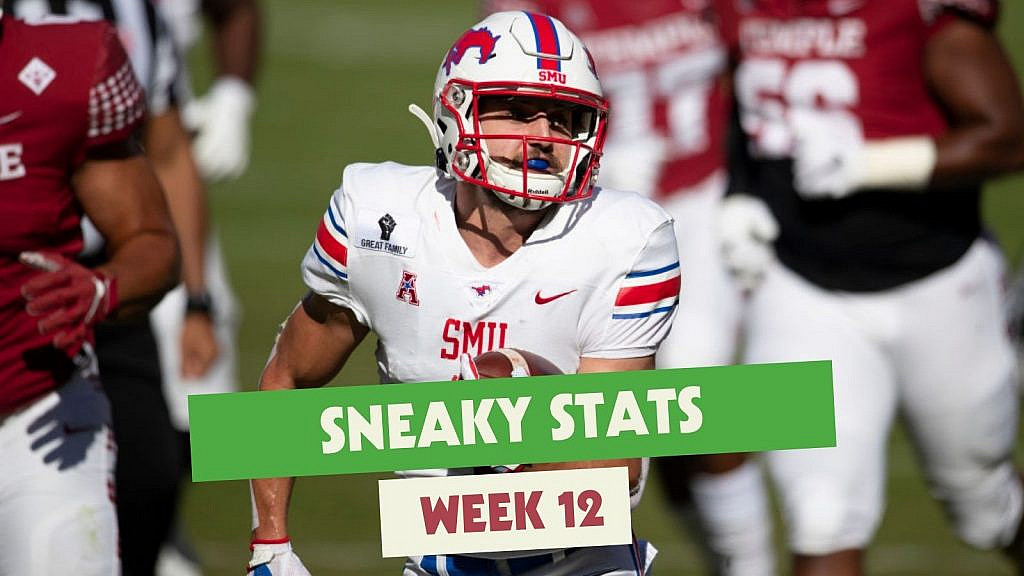 Welcome to back to the Sneaky Stats series! In Week 11 we saw Baylor fans storm the field twice in their win over Oklahoma, Georgia allow more than 13 points, and an FCS team drop 42 points on an SEC giant in the first half alone! Let’s take a brief look back, and then a look ahead at Week 12 and beyond.

– Caleb Williams went from Heisman contender and the most efficient true freshman quarterback of all time to the bench on Saturday. Kudos to the Baylor defense, because Williams was pressured on 43% of his drop backs, sacked a season high three times, and intercepted for the second and third times on the season. Meanwhile, Abram Smith is up to 1244 yards from scrimmage and 11 touchdowns for Baylor after crushing the Sooners for another 148 yards on the ground!

– Georgia spent five minutes and 42 seconds of the first half actually trailing the Tennessee Volunteers this past weekend before going on a 34-0 run over the next 31 minutes and 45 seconds that put away any hope of the colossal upset. Props to Tennessee for scoring 17 points (most allowed by Georgia all year), but they were just completely outmatched. And it’s official. Stetson Bennett is now the most efficient Power Five quarterback in the nation by nearly a half yard per play. What a time to be alive!

– The Purdue Spoilermakers did exactly what they always do, laying an embarrassing gold and black egg of a performance against Ohio State immediately following their upset of Michigan State. They allowed a ridiculous 31 points in the final 24 minutes of the first half. Garrett Wilson (one of three future first round receivers for the Buckeyes) scored four total touchdowns, three of which came in the first half alone. And after tossing another five touchdowns through the air C.J Stroud is just one of three Power Five quarterbacks averaging more than three passing touchdowns per game (3.33 per game). The only others are Bryce Young of Alabama and Pittsburgh’s Kenny Pickett.

– Samford–yes, FCS Samford–scored more first half points (45) on Florida this weekend than any other opponent in Florida football history! Samford was also just the third team in the last seven years to pass for 400+ yards against the Gators. Matt Corral of Ole Miss, Mac Jones of Alabama (currently with the New England Patriots), and now something called a “Liam Welch” of Samford have all led aerial attacks to 400 passing yards against Dan Mullen defenses.

– Texas A&M allowed 29 points and over 500 yards of offense to Ole Miss this past weekend, which isn’t great. But! That was actually only the fourth time an A&M opponent had scored more than 14 points in a game this season. The Aggies lost three out of those four games where they allowed more than 14 points. But somehow they beat Alabama when they gave up 38. A&M desperately needs to find some offensive consistency in games against opponents with a pulse.

– Braelon Allen, a 17-year-old linebacker-turned-running-back, just absolutely shredded the Northwestern defense this past weekend. It was his sixth consecutive 100-yard game for the Wisconsin Badgers. No Badgers true freshman has posted six straight 100-yard rushing games in the last 20 years. Not Jonathan Taylor. Not Melvin Gordon. Not one true freshman for Wisconsin in the last 20 years has done this.

– Welp. The Auburn Tigers decided to imitate the Atlanta Falcons this weekend. Auburn pulled away early with a 28-3 lead against Mississippi State. The Bulldogs amassed just 62 total yards on their first three drives, but then the rest of the game happened. Mississippi State went on a 40-0 run, and just like Samford against Florida, ended up with over 400 yards passing. The last quarterback to throw for 400+ against the Tigers? Chad “Swag” Kelly of Ole Miss in 2016.

It’s Week 12 and we may set a record for the most potential “let down, look ahead” games in the history of the idiom. You’ll find that to be a prominent theme in the sneaky stats this week with plenty of playoff implications mixed in!

The number of FBS defenses in the last five years to give up more passing yards per game than this season’s Michigan State Spartans. They’re allowing nearly 330 yards through the air per week. The only team worse than that in the last five years? 2017 UConn. C.J. Stroud and his elite trio of Garrett Wilson, Chris Olave, and Jaxon Smith-Njigba connect for over 280 passing/receiving yards per game by themselves. Buckeyes by a million. Or? Let-down, look-ahead game as the Buckeyes see Michigan on the schedule next week.

The Oregon Ducks have averaged 297 rushing yards over their last three games. But! Kyle Whittingham’s Utah Utes have only been giving up 110 yards on the ground in their last three. If Anthony Brown can’t at least do something through the air, this matchup could get ugly for the playoff hopefuls in Green & Yellow.

The Red Raider redshirt freshman quarterback Donovan Smith has completed 77.8% of his passes in the last two games for Texas Tech on his way to 514 passing yards and four touchdowns. Yes, Oklahoma State is coming off of a 63-17 destruction of TCU. But this week’s game against the Red Raiders could be the ultimate “let-down, look-ahead” situation if there ever was one. The Cowboys face off against Oklahoma next week in the famous Bedlam rivlary. But first, they’re going to have to stop a 6’5″, 230-pound wild card of a quarterback that just racked up 376 total yards of offense against Iowa State by himself.

Speaking of “let-down, look-ahead” games (for the third time already) that could shock the college football world, Arkansas plays Alabama this weekend before they head to Auburn for the Iron Bowl. But the “zero” here actually alludes to the percent chance Arkansas has of winning this game. It’s also identical to the number of statistical edges that the Razorbacks hold over Alabama this season (that I could find). And what’s crazy is that it’s also the same exact number of times Arkansas has beaten Alabama since Nick Saban took over as head coach! Zero! Not happening.

The number of rushing yards Notre Dame has allowed in their five close games (win or loss within 11 points) this season. If there’s one area where the Fighting Irish have really struggled this year it’s in stopping dual-threat quarterbacks. All five of their close games have come against opponents whose quarterbacks account for at least 16% of team rushing yards. Jeff Sims accounts for nearly 30% of Georgia Tech’s rushing yards in the games he plays. The Yellow Jackets also boast one of perhaps the best dual-threat running back in the nation in Jahmyr Gibbs. Gibbs currently leads all FBS running backs in receiving yards.

Where Houston ranks in defensive yards allowed per game this season. Most teams are really good at stopping the run or stopping the pass. Houston ranks inside the top 20 at stopping both. However, with Seth Henigan healthy at quarterback, Memphis has scored at least 28 points in every single game this season. If Houston can push past the Tigers the AAC Championship Games may be the most impactful one in conference history as they faceoff with playoff hopeful, Cincinnati.

I know, I know. I’m doing the whole “let-down, look-ahead” thing a lot this week. Just one more. Michigan faces off against Maryland this week and on paper it looks like a pending blowout. But! As much as we believe Michigan to be a strong running team, they’ve only been averaging 151 rushing yards against Big Ten opponents this year (outside of their game against Northwestern’s 125th ranked run defense). That 151-yard mark would actually make them below average rush attack. Plus, they’re likely without stud running back Blake Corum again this week. If the Wolverines get caught looking ahead to Ohio State next week, Maryland might just surprise them.

The SEC East and Sun Belt East Preview for 2022

Whether you’re pursuing a Bachelor’s degree in finance or a gold star in Ms. Woodburn’s pre-K class, Halloween is a special occasion for undergraduates everywhere. This holiday might perplex you, but it’s not all that different from your everyday life as a human in 2021. Months of putting on a brave face and pretending to ...

For over 25 years, the Big XII Automotive Group has served the southwestern United States with quality vehicles at affordable rates. From Oklahoma’s unparalleled horsepower to the premium luxury of our Texas classics, there’s something for everyone on our lot. Don’t believe us? Check out some of these reviews from our real customers… Related: The ...