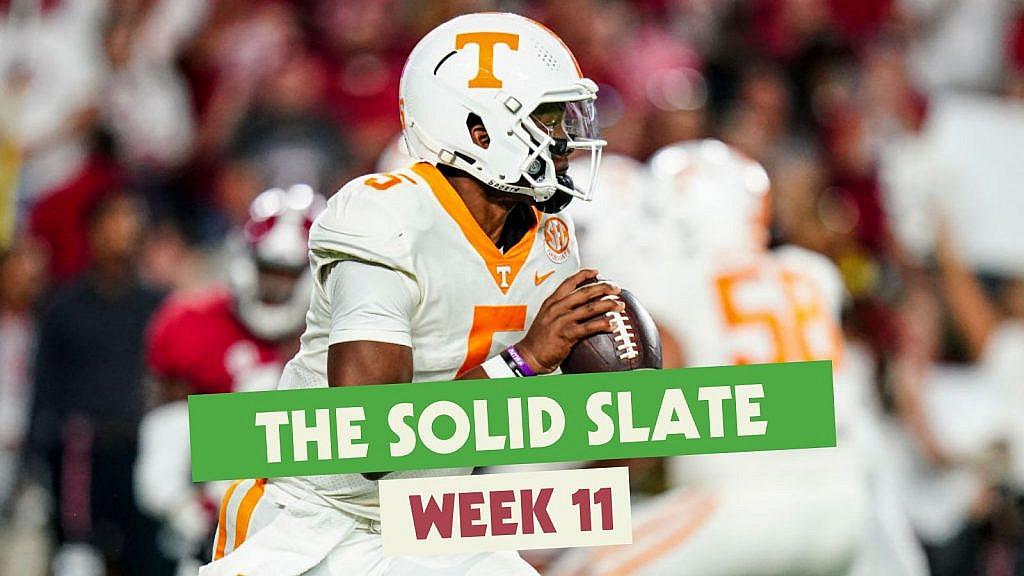 Part of growing up is knowing what you don’t know.

When you’re a kid, you learn by observing and asking. Originally, your knowledge just comes from your home life. Then you go to school and talk to your friends and maybe pay attention to class. Greater perspective means you know more. As the circle you walk in widens, as you go to high school, then college, then enter the work world, you gain new knowledge, and you get smarter.

Not so fast. Because then you encounter a situation where you know too much. The data interweaves and buts up against itself in a random tapestry you can’t untangle. All the facts and stats cascade on your brain at once. Analysis paralysis is real, and it’s spectacular.

If you want to make the perfect decision every time, you’ll never decide. The easiest way to overcome the deer-in-the-headlights horrors of knowing too much? Realizing that you don’t, and that’s fine. Then make a choice, and see what happens.

College football, at this stage of the season, can become one big game of analysis paralysis. We’ve seen enough matchups to have a good idea of who’s good, who’s fine, and who’s in trouble. But get granular enough, and you can fool yourself into overcomplicating what you watch by making details too consequential, trying to read tea leaves ahead of time to determine who’s going to win.

Me, I try to simplify, like Marie Kondo. I look at the schedule every week and ask about every game: “Does this look fun?” And if it doesn’t, I don’t watch it.

Below, I’ve broken down the results of my rigorous Marie Kondo-ing for all to see. Take it as your official guide to the fun stuff this weekend.

But before that, on Thursday we get North Carolina @ Pitt (7:30p/6:30p, ESPN). Two high-powered offenses on display, but only Pitt has a defense. You’d know this if you watched the Tar Heels get boatraced (and somehow still win) last week by Wake Forest. Still, there’s a strong chance of rain in the forecast, so the slop could keep things close. If it comes down to the run, UNC has the advantage.

In a relatively jam-packed weekend, it’s probably got the most skippable set of games. Head out to the links, mow every last blade of grass on that lawn, or stroll with your favorite person through the colorful foliage at your nearest arboretum. The possibilities are near-endless.

Oklahoma @ Baylor (12p/11a, FOX) could be a conference championship preview. The Bears need to win out to have any shot at the Big 12 title game, and my guess is they’ve been working hard this week after an embarrassing lookahead loss to rival TCU. The Sooners are coming off a bye, and although they’ve looked a tad shaky, Caleb Williams largely has command of this prolific offense. Neither side has a great passing defense. This one will probably be won through the air.

Michigan @ Penn State (12p/11a, ABC) gets this slot. (Stop yelling at me, SEC fans. Auburn’s probably going to beat CLANGA.) Despite Sean Clifford’s injury concerns, James Franklin will probably have Penn State up to knock off the Wolverines in Beaver Stadium. But will it matter? Michigan has been exceptionally good this year, exceeding my expectations for sure. After a disappointing loss to Sparty, they kicked Indiana in the teeth last week. They bring a run-heavy scheme and a stingy D to bear. Penn State will have to play the game of their collective lives to defeat them, methinks. But it’s Happy Valley. Never say never.

Georgia @ Tennessee (3:30p/2:30p, CBS) has a couple wrinkles. It’s at Neyland, which I would say makes things harder for the Dawgs, but let’s be honest here. The Vols have looked balanced on offense when they’ve had the ball, but they don’t hold onto it long. They’re 130th (!!!) in time of possession. That puts a ton of weight on their D to keep other teams down, and they haven’t done a marvelous job of that, allowing just over 28 points per game. Unless the Vol offense can find some chink in the brick wall that is the Dawg defense, this one may only be close for a half.

Purdue @ Ohio State (3:30p/2:30p, ABC) is here because of upset potential. The Spoilermakers have ruined Iowa and Michigan State’s seasons thus far. And both times the keys have been (1) accurate passing, (2) stingy defense, and (2) winning the turnover battle. Here’s the thing: the Buckeyes look susceptible to that kind of attack. Their secondary gives up about 250 yards on average every game. While CJ Stroud does have the offense humming, they definitely pass better than they run. And Stroud threw two picks last week. I’m not predicting anything. I am saying that you should be giving this line the ol’ raised eyebrow.

Texas A&M @ Ole Miss (7p/6p, ESPN) boasts two teams hyped as Bama Killers this year. But only the Farmers slayed the beast. The Rebs, despite Lane Kiffin’s best popcorn salesmanship efforts, couldn’t make it happen. On paper, the Aggie offense looks sort of meh. But you have to remember that they laid some eggs early, so if you’re averaging, it won’t look great. TAMU has excelled on defense, and Ole Miss decidedly has not. Both teams will be coming to play, angling to stay in the national conversation.

NC State @ Wake Forest (7:30p/6:30p, ACCN) is a stakes-filled ACC matchup. The Deacs are trying to wash the taste of tar heel out of their mouth after a tough loss last week, but the Wolfpack smell blood. Devin Leary will try to get his licks in, sure, but if you ask me, NC State should rely on Zonovan Knight. Wake doesn’t really have a run defense to speak of. Another big question: can Wake still score against a Wolfpack defense that’s been balanced and doesn’t get burned too often?

Washington State @ Oregon (10:30p/9:30p, ESPN) exists, and should be fine. Oh, you want me to say more? Well, it’s #Pac12AfterDark so things can always get weird. Wazzu isn’t good at much this year, but the passing attack’s been fine, and Oregon’s secondary’s shown flaws. But if the Ducks just execute and lean on the run, they should pull away.

Nevada @ San Diego State (10:30p/9:30p, CBSSN) is your Secretly Decent game of the week. This matchup revolves around one single question: Can Nevada’s offense score points? Normally, your answer would be yes! They rack up 36 points a game, almost entirely through the air. But the Aztec D is really, really good. They hold teams under 20 points on average. And they’ll need to here, because yikes, those offensive numbers aren’t fantastic.

Welcome to back to the Sneaky Stats series! Week 3 provided us with some fun upsets, some faithful favorites thrashing their opponents, and dramatic, potential playoff implications galore. Let’s take a brief look at some fun stats from Week 3, then look ahead to some sneaky stats that could impact Week 4 action! Week 3 ...

Yo, yo, and hello college football fans. Hope you had a marvelous Christmas/Hannukah/Diwali/Kwanzaa/Winter Solstice! Normally I start things off here with some meditative intro about the week’s games or life in general, but we’ve got a schedule to keep, and a ton of games to preview, so we’re gonna get right into it! Peach Bowl ...