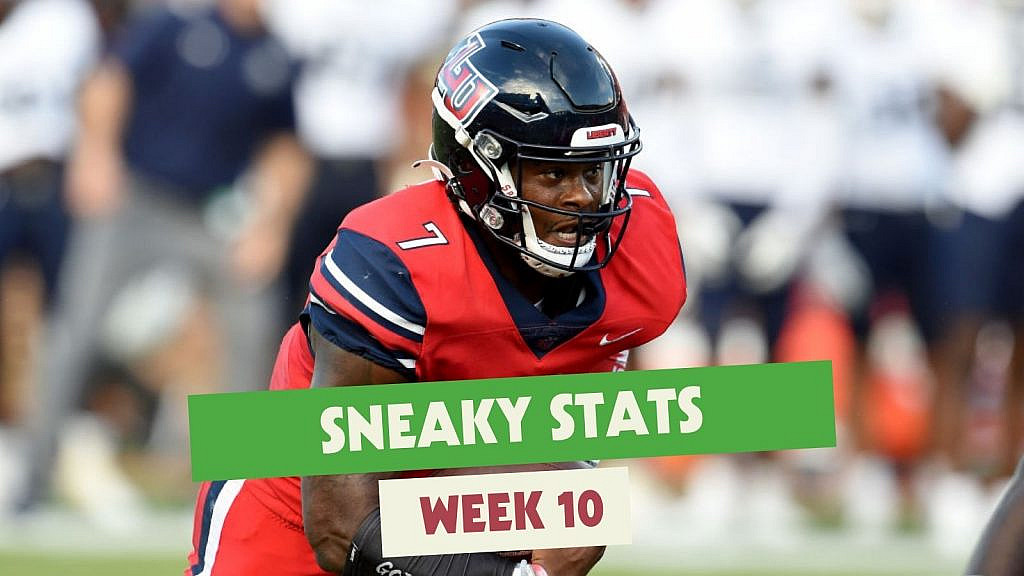 Welcome to back to the Sneaky Stats series! In Week 9, we saw Michigan provide their fans with the annual big game let down and Texas fail to show up for yet another second half. Let’s take a brief look back, and then a look ahead at Week 10 and beyond!

– The Michigan Wolverines have this fun annual tradition where they act like they have a great run defense, but then randomly allow five rushing touchdowns in a single game. In fact, they have done this in five of Jim Harbaugh’s seven years as head coach. However, this time it was different. It’s usually against Wisconsin. And it’s normally multiple players doing the scoring. This time, it was all Kenneth Walker III, stomping the Wolverines for 197 rushing yards and five touchdowns. But shout out to Andrel Anthony, wide receiver at Michigan. The kid had never caught a ball in a college game, but snagged six for 155 and two scores on Saturday.

– Xavier Worthy continues to be the only consistent threat for the (still definitely not-close-to-back) Texas Longhorns outside of Bijan Robinson, and that’s a problem. Worthy scored a long touchdown on his way to a 4/115/1 stat line, but the Longhorns all but disappeared again in the second half. The Baylor defense held the Burnt Orange to just 115 total yards of offense and outscored them 21-3 in the final 24 minutes of the game.

– Dan Mullen is making headlines for the wrong reasons this week and it’s not just because his Gators got smoked 34-7 by the Georgia Bulldogs. Gator fans took issue with his comments on recruiting, as Mullen implied that it isn’t recruiting time right now in the middle of the season. Georgia has brought in 23 five star recruits compared to Florida’s 2 in the past five years. The Bulldogs have finished inside the top five in recruiting each of the last five years. Dan Mullen’s Gators brought in the 12th ranked class this year. Not a bad national rank, but being ranked 12th in the nation is barely good enough to rank fifth in the SEC.

– Bravo, Penn State. The Nittany Lions held their own against Ohio State in a game where they were expected to lose by three scores. The Nittany Lions edged the Buckeyes in first downs, third down efficiency, completion percentage, and even logged fewer penalties. However, when you average 1.1 yards per carry for 33 total yards on the ground that’s not going to cut it against a top five team.

– Pittsburgh’s hopes were dashed this weekend by Miami’s newfound gunslinger, Tyler Van Dyke. TVD completed 76% of his passes for 426 yards and three scores in the 38-34 Hurricane victory. He’s racked up 751 yards passing and seven touchdowns in the last two weeks alone while averaging over 10 yards per pass attempt!

– Ole Miss gained a total of 37 yards on the 11 plays that freshman quarterback Luke Altmyer was in for an injured Matt Corral. That level of offensive efficiency would rank the Rebels dead last in the FBS by almost half a yard per play. Lane Kiffin apparently grew tired of that quickly, called a timeout and subbed a hobbling Corral back into the game. But that was never going to be enough. Tank Bigsby’s 150 yards from scrimmage and the good version of Bo Nix (9.87 adjusted yards per pass attempt) that decided to show up this week were just too much.

– As much as the Boilermaker in me hates to admit it, the Indiana Hoosiers may have found their quarterback of the future in Donaven McCulley. The four star freshman led the Hoosiers to just 20 total yards of offense and got sacked twice on his first three drives against Maryland. But after that, McCulley cleaned things up, throwing two touchdowns, and leading a near comeback victory scoring 35 points in three quarters. The future may be bright in Bloomington.

It’s Week 10 and by the time many of you read this, the first College Football Playoff rankings will be revealed. So yes, we’ll be diving into some sneaky stats that may have an effect on some potential playoff teams. But don’t worry, we have a few nuggets for some of your teams who might be on the outside looking in!

Where Purdue ranks in defensive points allowed this season. The Boilermakers are allowing just 17.1 points per game this year and have already knocked off one top five team this season (24-7 win over Iowa). They also haven’t allowed 400 total yards of offense even once this season. Despite all the hype surrounding Michigan State coming off of the win over Michigan, the Spartans have only averaged 318 yards offense in their last two games. For perspective, their offense would rank 119th among FBS teams if that was their season-long average. It’s likely that Michigan State won’t simply coast to victory over the Boilermakers.

Cincinnati’s defensive yards per play allowed on the season. The only two teams to allow fewer yards to per play? Georgia and Wisconsin. Despite all the noise about Cincinnati “struggling” to beat weaker teams, they’ve truly done nothing but dominate opposing offenses all season long. If they keep Tulsa’s 15th ranked, Group of Five-level offense in check this week and win in dominating fashion, that should actually be considered a “good win” for the committee to consider down the stretch.

The number of turnovers LSU has forced in their three FBS wins this season. In their four FBS losses? Just two. The Tigers have struggled all year long in many ways, but they’ve changed their formula lately. They have upped their defensive blitz percentage and shifted their pass/run splits dramatically. They’ve shifted from 60:40 pass/run rate to a 45:55 split in their last three games. If they can win the turnover margin and control the ball, they could keep things close with Alabama.

The number of total offensive yards that Sam Hartman is averaging for Wake Forest over the last three games. If he played for virtually any other team, he would be a Heisman frontrunner, but the Demon Deacons just aren’t a sexy enough brand for that. Now he gets to shred the North Carolina defense that’s ranked 91st in defensive efficiency. Wake Forest should move to 9-0 after this week, making the CFB Playoff committee’s job just a little bit harder.

Oregon’s yards per play differential in all of their games outside of the embarrassing loss to Stanford a month ago. For some perspective, that mark would make them a top five team in YPP differential on the year, but they had to go and screw things up at least once like the Ducks usually do. This week, if they can crush a 4-4 Washington Huskies team that hasn’t scored more than 24 points in a game since September, they’ll be well on their way to a CFB Playoff spot.

The number of penalties Baylor has committed in their last two games combined. They kicked off this season with 43 penalties in their first six games. Nine of those came in their only loss this year against Oklahoma State. Through six games, the Bears were a bottom ten team in terms of penalties. Now that they’ve cleaned things up, they should easily take care of business against a struggling TCU defense currently ranked 112th in yards allowed per game.

This will be Auburn’s fifth game against a ranked opponent this year as they face off with Texas A&M this weekend. This will be the third ranked opponent for the Aggies. Although there’s never been a two-loss college football playoff team before, the winner of this game could have a real chance given their strength of schedule. Auburn would still have to beat Alabama in the Iron Bowl. Texas A&M would still have to beat Ole Miss next week. But either way, whoever wins has a shot at 3+ wins against ranked opponents and an unprecedented run at the playoff.

Ole Miss enters this week with the 4th most yards per game in the nation. Liberty is allowing the 9th fewest yards per game. The Hugh Freeze Bowl is set to be an incredible matchup between two of the top three quarterback prospects eligible for the 2022 NFL Draft. Both Malik Willis (Liberty) and Matt Corral (Ole Miss) have over 500 rushing yards. They’re both posting at least 9.9 adjusted yards per pass attempt (near 99th percentile pass efficiency, historically). This could be the game of the week.

What College Football Games Are On TV? Championship Week (12/4)

I spent Thanksgiving a week ago with my family. It was wonderful seeing everyone in person again, sitting around a big feast, laughing and talking about anything and everything. Then, I sat at a feast of a different kind last Saturday, as Rivalry Week delivered in a huge way. Watching Michigan finally get a dub ...

At first glance, the ACC is just Clemson and everyone else. That won’t change this year. Clemson will indeed be dominant, and everyone else is probably playing for second place. But there are some decent indicators that the second place race will be close and fun to watch. Multiple top-flight quarterback talents, whole returning squads ...

Six Signs College Football Is Back To Normal

As America steadily emerges from the coronavirus pandemic, the question on every college football fan’s mind is when their favorite sport will be back to normal. But what does normal even mean? Sure, stadiums will reopen to greater capacities, but that’s a largely superficial change that barely impacts most schools south of the Mason-Dixon line. ...