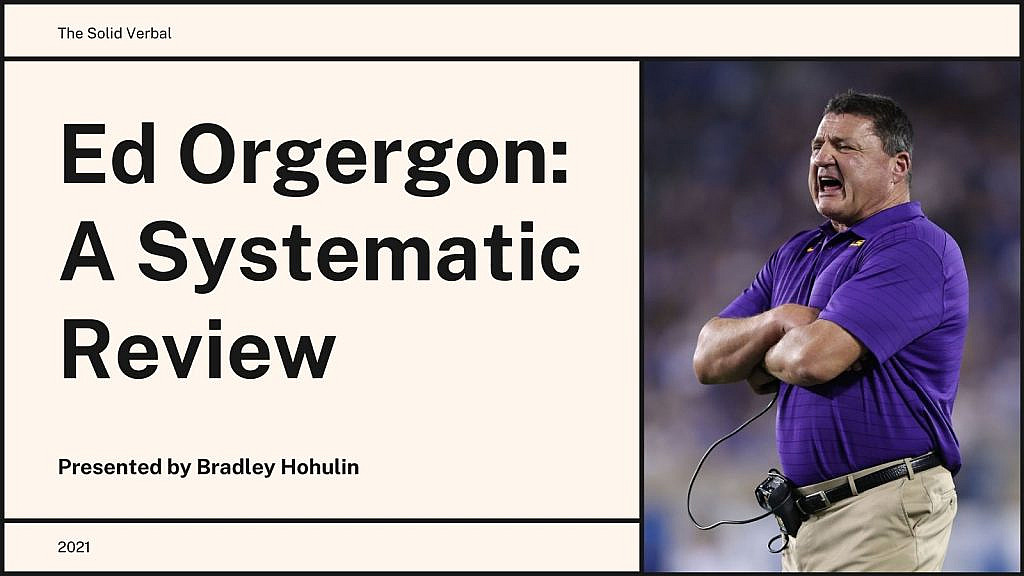 Firing of college football coaches linked to being gross, also not being particularly good at coaching

College football coaches (totus clipboardus) are a highly sought-after genus of organisms in the American deep South. Louisiana State University, a thriving colony of swamp people located in the bayous of the Southeastern Conference, regularly hunts the totus clipboardus for its fleshy hides and occasional ability to attract national championships. This meta-analysis examines the performance of Ed Orgeron (geauxtigahs eatjambalayas) as chieftain in Louisiana’s Death Valley region.

In 2007, LSU attained a championship with the aid of Les Miles (behaviorus inapproprius), a subspecies of decomposer that feeds on blades of grass as well as the ludicrous amounts of money in your university’s buyout clause. However, Miles’ eventual exile necessitated the hire of a new alpha, which the Tigers found in Orgeron. He quickly restored the program to national prominence, and in three seasons claimed a coveted national title. Nevertheless, LSU’s trajectory reversed shortly thereafter. The following study strives to understand how the Tigers went from apex predator to AP Poll extinction in two short seasons.

Researchers implemented a variety of tools and advanced metrics to evaluate Orgeron’s tenure. These included win-loss records, the usage rate of all-caps text on LSU message boards, the number of coherent words per sentence in Orgeron’s post-game interviews, and Baton Rouge’s GDP per capita (Gumbo Devoured Perennially per person).

Orgeron took over for Miles after four games and showed promise early. He wasted no time in transforming LSU’s culture by introducing themed practices, a tactic he brought from his stint at USC. These included Tell the Truth Monday, which confirms the theory that Orgeron always had an impeccable sense of irony.

The team finished the year 6-2 and defeated Louisville in the Citrus Bowl. The Tigers shut down Heisman winner Lamar Jackson by dominating the Cardinals’ offensive line, a feat only achievable by a hard-nosed SEC defense or a handful of well-rested fifth graders.

LSU navigated its slate with similar marginal success. Its greatest victory came against eventual SEC champion Auburn, which nearly made fans forget about its loss to Sun Belt co-champion Troy.

During the offseason, LSU attracted the attention of Joe Burrow, a transfer quarterback from Ohio State. Burrow led the Tigers to an upset of No. 2 Georgia and vaulted to No. 3 in the nation just in time to hand Alabama what some historians call the Crimson Tide’s most difficult 29-0 victory in school history.

Like literally every other team, LSU struggled mightily against Alabama early in Orgeron’s tenure. Neighboring tribes have sought to loosen the Tide’s stranglehold on the conference with varying degrees of success. Notably, Auburn’s Gene Chizik (sideburnae absentia) briefly wrestled control of the SEC from Alabama in 2010, but was ultimately outlasted by the unmatched endurance of Alabama head coach Nick Saban (Coach Saban).

The 2019 season marked a period of rapid evolution for the Tigers. Orgeron hired passing game coordinator Joe Brady, which marked the reappearance of the downfield throw in LSU’s offensive scheme for the first time in the Post-Mettenberger Era. Burrow led the Tigers on a 15-0 National Championship run with key victories over Alabama, Oklahoma, and Clemson. He also secured the Heisman by a landslide despite failing to win the starting job at Ohio State two years prior. As seen in Figure 1, the inability to see Burrow’s immense potential remains one of Urban Meyer’s most humiliating failures as a leader of men. 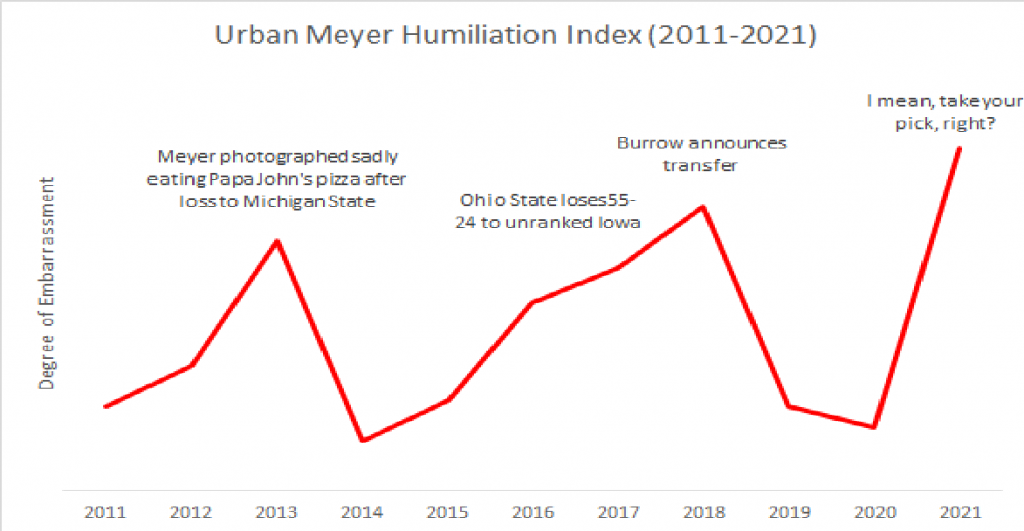 The Tigers entered the abbreviated season No. 6 in the AP Poll. Many considered No. 6 an inaccurate ranking for a team fresh off perhaps the most dominant campaign in modern college football history. A post hoc analysis of LSU’s 44-34 loss to Mississippi State verified the No. 6 poll spot was indeed inaccurate, just as it would have been for the average Conference-USA school.

The Tigers floundered throughout the remainder of the year. The offense was decimated by several key players’ decisions to opt out. The defense was decimated by Orgeron’s decision to hire coordinator Bo Pelini. LSU lost by a combined 75 points to Alabama and Auburn, but managed to upset No. 6 Florida 37-34 after Gators linebacker Marco Wilson hurled an opponent’s cleat 20 yards downfield for reasons scientists still ponder to this day (Fig. 2). 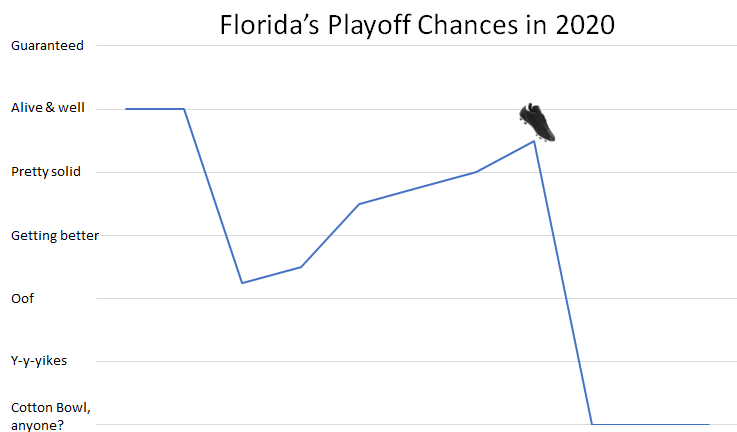 Thus far, LSU has seen little improvement. A slew of injuries has sidelined several of the Tigers’ stellar athletes, and also quarterback Myles Brennan. Initially, researchers questioned whether those health concerns might be a confounding variable leading to Orgeron’s failures. They concluded an LSU roster hampered by injury should probably play about as well as Kentucky. In Week 6, the Tigers narrowly missed that mark by three touchdowns.

When the university announced it would part ways with Orgeron following another dramatic upset of Florida, scientists examined the link between the Tigers’ record and the level of despair among LSU students. They intended to use the data (n= 34,290; ceauxvariance=-.97, correlation ceauxefficient=.93) to run a regression analysis. However, zero analysis was required to see Orgeron’s regression.

Why did LSU decide to move on from Orgeron?

Some theorists posit that Orgeron, though a skilled recruiter, struggles to win when he isn’t coaching the equivalent of an NFL roster. These findings have since been corroborated by previous reports from USC, Ole Miss et al.

Furthermore, case studies of Orgeron’s off-field activities point to a few possibilities. Though they were wary of conflating correlation with causation, experts did suggest Orgeron’s propensity for cover-ups, locker room tantrums, and sexual harassment likely did not help his chances. A subsequent 99% confidence interval confirmed that hitting on a high-ranking LSU official’s wife at a gas station does not, in fact, contribute to career longevity.

Ultimately, we can trace Orgeron’s dismissal to the fundamental precepts of Mangino’s Law: a college football program will overlook its coaches’ egregious behavior as long as possible until 1) said behavior is so widely abhorred by the public that it can no longer be swept under the rug and, more importantly, 2) the coach starts losing football games.

The SEC East and Sun Belt East Preview for 2022

A Thanksgiving Feast with College Football’s Most Dysfunctional Family

It’s the fourth Thursday of November. A gentle snow coats the shingles of 2021 Playoff Lane, where a hodgepodge of visitors have gathered to celebrate Thanksgiving. Mere minutes remain before the holiday feast when a knock is heard at the door. Alabama, ever the gracious host, opens it to greet his guests. “Well, I’ll be,” ...