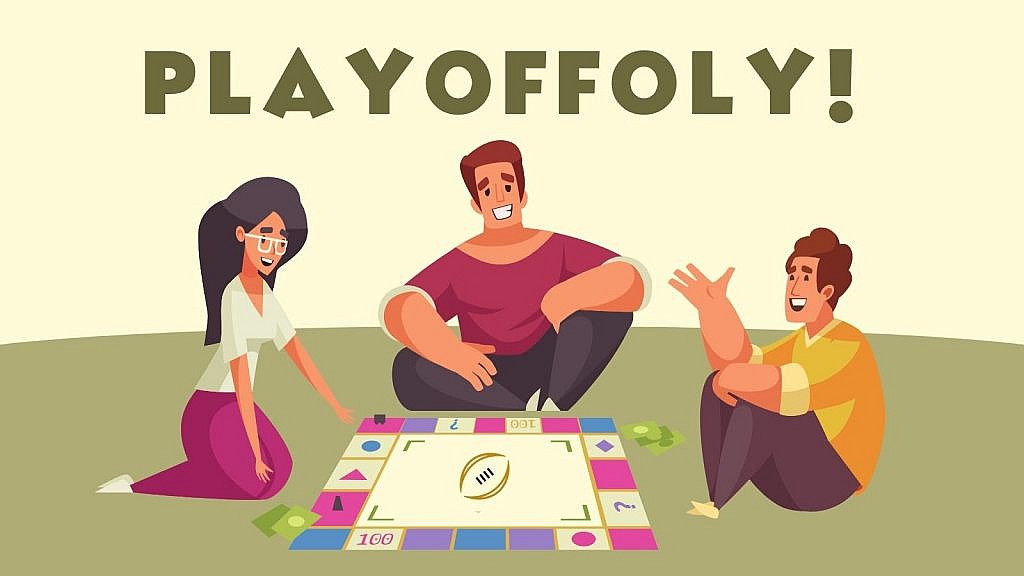 Thank you for purchasing this copy of Playoffoly, college football’s most beloved board game since 2014. While I’m sure you and your friends are eager to dive into the fast-paced world of trading poll spots and earning national recognition, it’s important you understand the rules first. Just put yourself in the shoes of your favorite “amateur athlete.” Before they can brutalize their body for your amusement and drive immense profits for a massive institution, they, too, must first be a student.

P.S. Keep an eye out for Playoffoly: Expanded Edition! Challenge your friends with even more ways to arrive at the same outcome. Coming soon to a media conglomerate near you.

Your goal is to be crowned college football’s champion by hiring superior coaches, recruiting top-end talent, growing a national brand, and securing ample funding from boosters via any (ideally but not necessarily legal) means possible. If we’re being completely honest though, it’s mostly the last thing.

Place the board on an obviously uneven surface and put all cards face down in their corresponding locations. Each player chooses one token to travel around the board. You can select from a variety of equally cool and intimidating mascots including devils, dragons, and tree nuts that might give your dog an upset tummy.

Distribute the vast majority of prestige points to a handful of competitors, then toss the remaining funds to the plebeian masses so they may hungrily fight over them like the pack of rabid dogs they are.

Elect a player you sort of but don’t really trust to fairly allocate resources between competitors. This individual will play the role of the NCAA.

Each time a player’s mascot lands on or passes over the corner marked WEEK 1, they receive 200 prestige points. This is the natural outcome of coaches and athletes improving from one season to the next. For a slightly more realistic experience, players using the Seminole or Cornhusker token might not be eligible for any noticeable improvement year after year.

Place your mascot on WEEK 1, roll both dice, and advance the corresponding number of spaces. If you throw doubles three times in a row, who do you think you are, some kind of dice wizard? I don’t think so, hot shot. Even an organization as inept as the NCAA can smell something that fishy, and you’ve got an entire raw bar in your impermissible benefits buffet. Move your mascot immediately to Probation, do not pass WEEK 1, and don’t you dare collect 200 prestige points. Just be grateful we didn’t send you to the Pinstripe Bowl.

All around the board, you will see a series of color-coded properties classified by how much they matter to the Playoff Committee. Whenever you land on an undecided matchup you may purchase a Win. If you gain control of an entire color, you can pay extra to designate a victory as a Quality Win, which you can eventually trade in for a Statement Win.

Some of the matchups you might encounter include the following:

Illinois Avenue — Experienced players should consider skipping over this region entirely, as you are extremely unlikely to find any Quality Wins within.

Pacific Avenue — One of the cheapest victories on the board, Pacific Avenue is a great conference to pick up easy wins. But don’t get discouraged if one team appears to dominate early! Even if Oregon has a few Quality Wins, sometimes all it takes is a severely concussed quarterback and the 118th best rushing defense in the nation to take down the Ducks.

Atlantic (Coastal) Avenue — In traditional versions of Playoffoly, Clemson would begin the game with this region already in its possession. However, players can now decide ownership of this tier with a coin toss. This simulates the chance of an ACC title contender looking decent or looking like utter steaming garbage on any given week with surprising accuracy.

Aspirational Avenue — For those lovable Group of Five squads ineligible to win a Power Five Conference, we have Aspirational Avenue. Bolster your resume with dominant victories throughout the Sun Belt or American, then grab a Statement Win against a perennial playoff contender. Eventually, you can cash in that hard-earned Statement Win for a No. 5 ranking and a trip to a New Year’s Six bowl against a team that absolutely does not want to be there.

Playoff Place — Barely beyond the reach of Aspirational Avenue sits Playoff Place, easily the most sought-after real estate in all of Playoffoly. This property was built to accommodate four players, but your group will be lucky if three of you can muster anything short of a massive Loss here.

Connecticut Avenue — The only board game property to be officially condemned in a court of law.

Scattered about the Playoffoly board are four railways:

Rebuild Railroad — Nobody knows how far these tracks go, but no matter what it’s going to be an uphill climb. The Rebuild Railroad winds through Indiana Avenue and pretty much circles nonstop around Tennessee Avenue for when the Volunteers pull the plug every three years or so.

Redemption Railroad — If you suffered an ugly Loss but think you still have a shot at Playoff Place, good for you. That’s adorable. Spanning all the way from Austin to South Bend, the Redemption Railroad will let you keep on chugging like the little engine that could’ve started the backup quarterback from day one.

First Round Railroad(ed) — Congratulations! You’ve made it past Aspirational Avenue and you’re well on your way to Playoff Place. Just remember, if you aren’t one of a handful of players capable of securing a Win, landing on this space will invariably result in abject humiliation.

If a Statement Win from earlier in the year is starting to look a lot less impressive, you can cash it in for a brief boost in prestige. This is a risky long-run strategy, but it got Iowa to No. 3, so what do we know?

When a team has no Wins nor the means to obtain them, it declares bankruptcy. A bankrupt team sells its coaches to other teams’ assistant rooms, its players to the Chancefer Portal or the Community (College) Chest, and its hopes to its most delusional fans. As the crushing realization that a national championship is a pipe dream for 98% of schools slowly overtakes each player, the field will be whittled down until only one competitor remains. Who will that be? It’s up to you to find out!***

I’m not trying to contribute to Ty and Dan’s Fantasy Things tally, but allow me to make a Ted Lasso reference. I’m watching through Season 2 (no spoilers, y’all), and one moment in the first episode stuck with me. After a tough draw where his star player somehow killed a dog (don’t ask), Ted gives ...

“May you live in interesting times.” The supposed Chinese curse, made famous by orator Joseph Chamberlain, speaks a truth we somehow only grasp when times are actually interesting. And by interesting, I, of course, mean unsettled, shambolic, and chaotic. When there’s nothing but hurricanes, all anyone wants is a clear day. But too often, when ...

What College Football Games Are On TV (Week 7)

Back when I was in law school at Alabama, I used to watch college football games every week with my buddies. The featured game was of course the Tide against, well, whoever. I didn’t really care if Bama won, though. I was a bigger fan of my alma mater. So while my friends whooped and ...