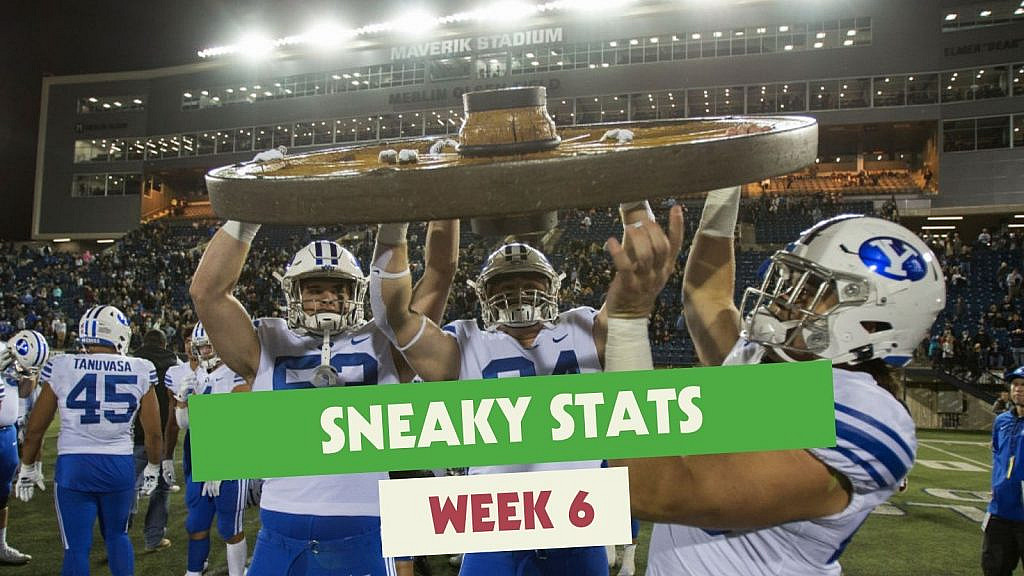 Welcome to back to the Sneaky Stats series! Week 5 revealed to us the truth about several teams, but it’s still unclear if there are actually more than two or three good teams in all of the sport. Let’s take a brief look at some fun stats from Week 5, then look ahead to some sneaky stats that could impact Week 6 action and beyond!

– First things first, Cincinnati beat Notre Dame 24-13 and it shouldn’t have even been that close. Jack Coan finally got benched after posting another solid 4.65 yards per play (not great). The Irish quarterbacks barely completed 50% of their passes. The only thing that kept the Irish anywhere close to in the game was a late third quarter fumble by Desmond Ridder just before the Bearcats were about to score again to extend their 17-0 lead.

– The Iowa Hawkeyes absolutely embarrassed Maryland this weekend. Iowa caught six interceptions and stole a fumble away from the Terrapins on their way  to a 51-14 victory. Iowa is now on pace to finish with a +29 turnover margin on the season (the highest mark in over 15 years).

– Georgia’s defense is still absurd through five games after shutting out Arkansas 37-0. The Bulldogs defense ranks first in yards per play allowed, total yards, first downs per game, and points per game. Their defense has scored two touchdowns on interceptions this year while only allowing one offensive touchdown through five weeks. This may go down as the best college defense of all time by season’s end.

– TCU wanted to prevent Texas’ potential “backness” this weekend, but Bijan Robinson wasn’t having any of it. Bijan carried the ball 35 times (like he was some behemoth running back from the early 1990s) for 216 total yards and added a couple catches for 22 yards just for kicks and giggles. He’s now up to 1,470 yards from scrimmage in just his last nine games, averaging 8.65 yards per touch in that span.

– Speaking of efficiency, despite all of the defensive success in college football, there have never been more efficient quarterbacks than we’ve seen this year. There are currently 16 FBS quarterbacks posting over 10 adjusted yards per pass attempt. There have never been more than 12 finish above that mark in a season (last year). Until last year there had never been more than 8. However, the real difference-making quarterbacks are the mobile ones, who not only pass efficiently, but account for 15% or more of their team’s rushing yards. Malik Willis, Matt Corral, Sam Howell, Hendon Hooker (King of All the Underrated QBs), Dorian Thompson-Robinson, and (47-year-old?) Kenny Pickett hit both the 10+ AY/A and 15% rushing yard market share threshold so far this year. All of them will be drafted next spring. Guaranteed.

– Ohio State’s defense may still be imperfect, but after dropping 52 points on Rutgers this week they now lead in the nation in yards per game (over 555) and yards per play (8.57). The only team in college football history to finish with more yards per play in a season (at 8.6) was the 2018 Oklahoma team led by number one overall pick, Kyler Murray.

– Michigan State continued their winning streak with a 48-31 win over Western Kentucky. However, the Hilltoppers’ quarterback Bailey Zappe still managed to throw for 488 yards and three touchdowns. Plus, wide receiver Jerreth Sterns caught 17 receptions for 186 yards. Western Kentucky’s offense is perhaps the most fun in football and they built it by bringing in a completely new coaching staff and over 20 transfers this year. Teams are going to make note of their success, which may change the transfer portal forever.

– And last but not least, before we get to Week 6, Oklahoma State and Kentucky have to be two of the ugliest 5-0 teams of all time. Yes, Oklahoma State beat Baylor, but they did it averaging 3.5 yards per carry on 36 totes from their lead back and three interceptions from Spencer Sanders. Kentucky beat Florida, but they did it on the back of a 7-17, 87-yard performance from their whole-banana-with-the-peel-on eating quarterback, Will Levis. The chaos of the 2021 football season has only just begun.

Listen to our Week 5 Recap

It’s Week 6, and we have 28 FBS teams on bye this week. However, there are still plenty of top matchups and sneaky stats to dive into as we approach the midpoint of this bizarre 2021 football season with zero truly good football teams. Let’s see what Week 6 will bring…

The number of points scored in the last six Red River Rivalry games between Oklahoma and Texas. That’s an average of 76 total points scored per game. Five out of those six games were one-possession games. Yes, Oklahoma has won five out of the last six too, but Texas is built differently now, averaging almost 270 rushing yards per game. With the Sooners only allowing 84 yards per game on the on ground, that may actually be where the game is decided this week.

The number of yards per game Ole Miss and Arkansas were averaging before they were demolished by Alabama and Georgia, respectively, this past weekend. They’re both still 4-1, looking to bounce back to compete for second in the SEC West. Both teams have quarterbacks posting above 10 AY/A in the passing game. This could be the best game of the week.

Where Iowa and Penn State rank in points per game allowed this season. Iowa, 11.6 points per contest. Penn State, 12. They’re also both top ten in yards per play allowed (4th and 9th), turnover margin (1st and 10th), and passes defended (3rd and 9th). Neither team has a top 50 offense in terms of yards per game. This could be the ugliest display of offense we see all year.

The average rank of the offenses (in yards per game) that Georgia has faced this season through five games. They haven’t played a single team with a top 50 offense yet. Arkansas was their only opponent ranked inside the top 80. Auburn is currently ranked 17th in yards per game and 20th in yards per play. We’re about to find out how unstoppable Georgia truly is.

The number of games in which Stanford has outgained their opponents this season. And that one game came against Vanderbilt. Yes, even in their upset win over Oregon, Stanford was still outgained by the Ducks by about 60 yards. How? Turnover margin. Stanford hasn’t turned the ball over since Week One. Arizona State (Stanford’s opponent this week) has outgained their opponents in every single game and are still ranked fourth in the nation in yards per play differential on the year. They’ve turned the ball over six times in four weeks. Discipline may be the difference in this huge Pac-12 matchup.

Where BYU ranks at defending the pass this season. Boise State is putting up over 300 yards passing per game because their rushing attack has struggled (failing to average 100 yards per game). BYU’s only avenue to success this season has truly been through forcing turnovers (+8 on the season). If Boise State can control the ball via their short-to-intermediate passing game like they’ve done all year, they may be able to pull off the upset.

The combined win-loss record of UConn and UMass dating back to the beginning of the 2019 college football season. The good news? One of them is going to get a win this weekend! The bad news? Someone will have to watch this. These two teams are being outgained by about 220 yards and four touchdowns per game so far. We’ll see if either of them can find success in the Toilet Bowl this week! If you’re in the mood to watch a beautiful train wreck, check this game out!

A Thanksgiving Feast with College Football’s Most Dysfunctional Family

It’s the fourth Thursday of November. A gentle snow coats the shingles of 2021 Playoff Lane, where a hodgepodge of visitors have gathered to celebrate Thanksgiving. Mere minutes remain before the holiday feast when a knock is heard at the door. Alabama, ever the gracious host, opens it to greet his guests. “Well, I’ll be,” ...

What College Football Games Are On TV? (Week 8)

There may not be as many high-profile games as last week, but the ones that are? All of them have epic banger potential.