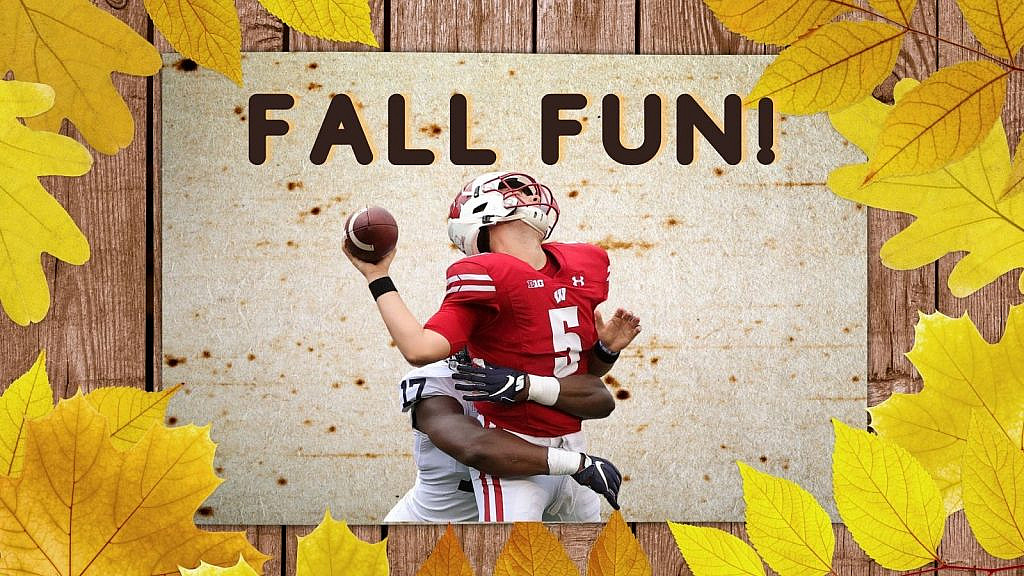 It’s the coziest, spookiest, most Instagrammable time of the year. At long last, fall is here.

Whether your instinct is to curl up next to a crackling fireplace with a good book or try out a new recipe — check back in next week for slightly naughty, super scrumptious pear tartlets — there’s no wrong way to enjoy the season.

But if you’re a college football fan, what can you do when your weekends are already so busy? Luckily for you, we’ve narrowed down the best fall activities to enjoy as you transition from hard seltzers to hot ciders and from spaghetti straps to spaghetti squashes.

Sure, it’s a little basic, but think of all the likes your photos will get! Sometimes, it’s nice to relax and actually do the picking instead of getting picked on. This outing is perfect for fans of teams like Colorado and Kansas, eager to scoop up a few easy wins with essentially zero resistance.

On second thought, I actually might take the bushel of immobile autumnal gourds to cover the spread against UConn. What can I say, I love a team with some real guts.

Get some fresh air and meet fellow masochists at the low, low fee of your tendons, your pride, and a literal registration fee. You can even do it for charity!

OK, so maybe the Tar Heels aren’t in the shape they thought they were. You don’t have to be fast to help out your community. In Week One alone, Sam Howell made numerous generous donations to the Virginia Tech secondary as North Carolina kindly contributed to the Justin Fuente Job Security Fund.

Voted the most festive way to contract smallpox in the 21st century, bobbing for apples is great if you love letting easy targets slip away in sloppy fashion.

Don’t worry, Clemson. If you decide you aren’t having fun, you can always join Iowa State in a rousing game of bobbing for reasons not to panic.

Walk through a haunted house

Jeepers creepers! Here’s a spooktacular Halloween fun fact: if you tour every haunted house within a 30-mile radius, you might see nearly as many ghosts as Graham Mertz does whenever he’s forced to throw into a halfway decent secondary.

Commune with the spirits of yore

Crank up the spook factor by casting off the shackles of modernity and reembracing the arcane arts. Grab a broomstick, put on your witch’s hat, and summon forth the dark magics of the ancients!

LSU fans, whip out that ouija board. You never know — perhaps the demonic essence with which Ed Orgeron traded a national championship for years of scandal and mediocrity is still open for business.

Go on a hayride

Aside from virtually every mode of transportation invented since the late 1700s, there’s no better way to get from A to B than in an allergen-infested grass wagon. Cruise along a scenic venue without a care in the world like Oklahoma through its schedule.

Ope! That was quite a bump. We probably shouldn’t have needed a last-second field goal to beat West Virginia, but everything is fine. Who cares if we have no clear threat at running back and fans were chanting for Spencer Rattler’s replacement at the end of last week’s game? It only sounds like the wheels are going to come off at any moment.

Strap in for a horror movie marathon

Grab the popcorn, turn off the lights, and enter a hellscape of pointless suffering and grotesque massacres. Dare to uncover your eyes as you plead with the people on your screen to do anything, anything else.

No! Not that! Why would you do that? Don’t you know you’re gonna get killed!?

Every boneheaded decision the protagonist makes, every torturous punishment that befalls them victimizes you as well. Truly, only a sick, twisted freak could enjoy viewing this.

Anyway, once you’ve recovered from watching that Vanderbilt game, might I suggest checking out something more tame like Cannibal Holocaust?

Get lost in a corn maze

This is a perfect outing for those of you living in America’s heartland — corn happens to be the Midwest’s second largest export, right behind mediocre quarterbacks.

Gather your friends and navigate a winding labyrinth of maize. Just be careful — if you stumble upon USC or Miami, you’ve likely lost your way forever and may have no means of getting back to where you once were.

Build a bonfire and burn it all to the ground

Well, you gave it a good try. OK, maybe just a try. Or whatever you want to call hiring Willie Taggart and Mike Norvell and starting two different quarterbacks each of the last four seasons.

When a tree doesn’t bear fruit and isn’t sturdy enough to build anything on, your best option is pure, cleansing flame. Tomahawk chop the diseased vegetation into logs and incinerate it until it’s carbon.

Smoke fills the air and stings your eyes. It’s definitely the smoke and not the tears. While the inferno before you should provide warmth, your heart remains cold and bitter. The earth will reclaim the soil and grow anew, but for you this season is one of interminable anguish. There is no consolation. Only ash.

As a sweet, sticky bonus, who doesn’t love a classic campfire s’more? Yummers!

Get seduced by a rugged small-town hunk

We definitely shouldn’t be doing this. What if people start to notice? I’m sorry, I’m just not sure I can be seen going around with a top-10 Arkansas team.

As the weather cools, it’s only natural to run to those who offer a little heat. Remember when the Razorbacks were good? Wouldn’t it be great to feel that warm rush of nostalgia, that fiery spark of romance? The chemistry may eventually fade, but there’s no reason not to let yourself be swept off your feet. Enough woo pig. It’s time to let the pig woo you.

Brace for the harsh, unforgiving winter ahead

Oh, how far away that resplendent 2019 season seems, a sweet but fading memory for us Minnesota faithful. We have sustained grave losses to the Ohioans, both the cursed Buckeyes and the razor-beaked Falcons of Bowling Green. Now, we must tend to our wounds and steel ourselves for the cold times. Though our defenses have proven sturdy on occasion, our offensive capabilities are frightfully anemic.

Hold fast and keep rowing the boat, dear friend. For I fear if we cannot secure more pelts and nourishment in a few short moons, we will have no choice but to skin and eat Goldy.

Whether you’re pursuing a Bachelor’s degree in finance or a gold star in Ms. Woodburn’s pre-K class, Halloween is a special occasion for undergraduates everywhere. This holiday might perplex you, but it’s not all that different from your everyday life as a human in 2021. Months of putting on a brave face and pretending to ...

Yo, yo, and hello college football fans. Hope you had a marvelous Christmas/Hannukah/Diwali/Kwanzaa/Winter Solstice! Normally I start things off here with some meditative intro about the week’s games or life in general, but we’ve got a schedule to keep, and a ton of games to preview, so we’re gonna get right into it! Peach Bowl ...