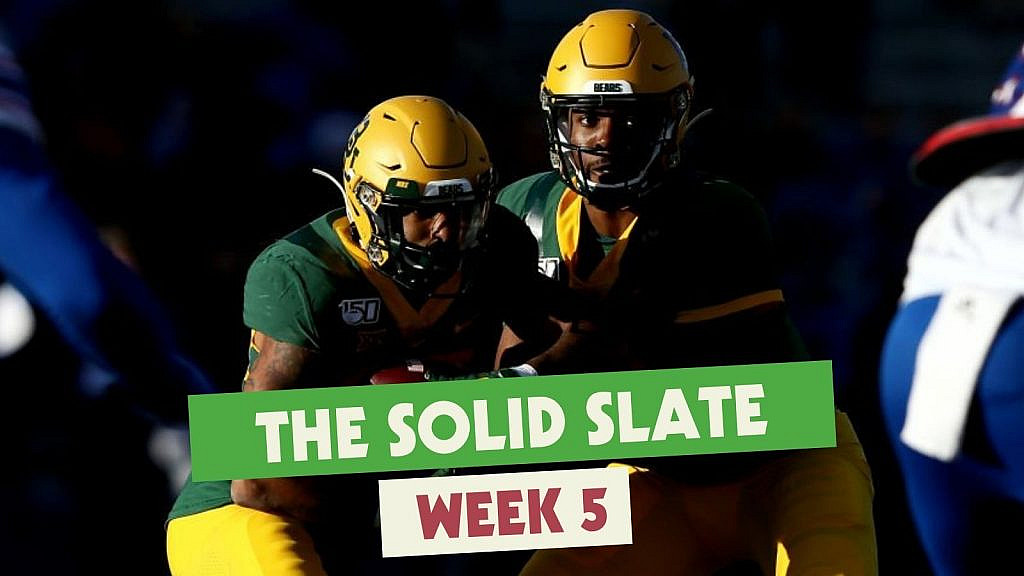 I’m gonna make a reference most Zoomers won’t get, but most washed folks will.

Y’all ever watch I Love Lucy? Specifically that one famous scene where Lucy’s trying to package all those chocolates and the conveyor belt starts going too quickly, so she starts shoving chocolates in her mouth to keep up. Even if you don’t watch classic TV shows, that scene’s been parodied to DEATH, so surely you’ve heard of it.

That conveyor belt is like this college football season. Every week, speed and chaos has ramped up little by little. The Playoff perennials have either wilted or shown serious flaws. New, fun contenders have risen from nowhere. In short, it’s become a flood of incredible, delicious morsels, and now’s the time to gorge yourself.

Let me help you avoid a stomach ache and break down this week’s schedule for you, as I do every week. That’s me, ol’ reliable Connor! Rain or shine! And it is STORMIN’ this week.

First off, Friday. Iowa @ Maryland (8p/7p, FS1) starts our jam-packed schedule off. It’s a battle between two undefeated squads. The Terps’ only moderately impressive win came against West Virginia and they struggled against Illinois, but they can score. The Hawkeyes have a ton of hype, but should you buy it? Their big victories came against Indiana and Iowa State, both of whom have lost some shine. Then there’s BYU @ Utah State (9p/8p, CBSSN) if you want to stay up late two nights in a row. Sure, Utah State beat a so-so Pac-12 team, but they lost big to Boise State. BYU’s looked pretty solid. This one could be over fast, but somehow Vegas is only giving the Cougars 7.5 points right now. Do they know something we don’t?

There isn’t one. I warned y’all last week. This time, there are umpteen amazing games, so you won’t have much chance to do anything but put your eyeballs on some footballs. Hopefully, your friends/family/GF will understand your unabashed love for this crazy sport, because this is the best week of matchups in years. Fight me.

Arkansas @ Georgia (12p/11a, ESPN) is suddenly a banger, as the Razorbacks have hog-rushed their way to a fantastic opening run that’s seen them own the two biggest programs in Texas. Sam Pittman has Arkansas believing they can knock off the only team that hasn’t really shown a chink in the armor so far this year. But then again, who have the Bulldogs beaten? They beat Clemson by 7, but the Tigers have taken on serious water. What I’m saying is that Georgia actually might have some hidden skeletons the Hogs D can drag out of the closet.

Michigan @ Wisconsin (12p/11a, FOX) could prove interesting. Sure, Sconnie’s 1-2, but they’ve had a murderer’s row of an early schedule. That Notre Dame loss last week looked bad, but if the Badgers can dust themselves off and get back into fighting shape, they can seek redemption against a Wolverine team that’s coasted to an undefeated first four weeks against easy competition. And even then, Cade McNamara didn’t lead the offense to anything terribly dominant last week against Rutgers, who held Blake Corum largely in check and blanked Michigan in the second half.

Listen to our Week 5 Preview

Ole Miss @ Alabama (3:30p/2:30p, CBS) is the matchup everyone’s talking about. The Rebs have looked dominant. Matt Corral has the offense humming, and the defense is … fine? Sure. We all know Bama’s kryptonite is a mobile QB that can pull off big plays and keep the Tide D guessing. After some warmups and a hard-fought victory over Florida, Alabama will be up for this game and the crowd at Bryant-Denny will be loud. Bryce Young has had a couple hiccups, but if the coverage team keeps things tight across the board and limits the Rebs’ deep threat, this could turn into a crockpotting. Or maybe not! This is probably Bama’s hardest fight all year until the SEC Championship (yes, I know, Arkansas in Week 12, but still).

Cincinnati @ Notre Dame (2:30p/1:30p, NBC/Peacock) is kinda an Early slate game, but I’m putting it down here because it should still be well in the offing come the Afternoon. The Bearcats boast an offense that scores in bunches. Desmond Ridder has done well slinging the rock, and Jerome Ford runs tough. Oh, and Notre Dame is a home underdog. After Jack Coan went down last week, Drew Pyne handled things well. Who’s playing quarterback this week is anyone’s guess. Regardless, the Irish will need to sort out their offensive line, or the Bearcats will be handing them their first loss of the season.

Baylor @ Oklahoma State (7p/6p, ESPN2) is somehow the biggest game of the night! Who knew? The Bears leveraged luck and gumption through noted Dude Tristan Ebner to defeat Iowa State last week. This week is another opportunity for gunslinger Gerry Bohanon and a brillant zone rushing attack to show that they mean business. And they have a dangerous, stingy D that can roll with anyone in the conference. The Cowboys are vulnerable. Spencer Sanders and the offense haven’t looked like themselves for the first few weeks of the year … except their last game, when they thumped Kansas State. But they boast a formidable front 7 that Baylor will need to solve. This will likely be close the whole way.

Mississippi State @ Texas A&M (7p/6p, SECN) is a battle of two teams with noted weak spots. And that’s why it’s here. These games tend to produce intrigue. The Aggies’ Zach Calzada was semi-efficient but not prolific last week. Isaiah Spiller might need to carry the offense on his shoulders, but that could be difficult against a Bulldog front that ranks 8th in the sport in rushing defense. Clanga comes off of a two-game losing streak where Will Rogers did his utmost but couldn’t get them over the hump. And the Aggie D is no slouch. The cowbells will be loud, but State needs to make some serious noise too.

Auburn @ LSU (9p/8p, ESPN) makes for the odd #SECAfterDark matchup, pitting Tigers against Tigahs. Auburn needed a comeback last week against Georgia State to secure the win. Meanwhile, LSU is still trying to shake off the stench of that early loss to UCLA. They started by eking one out over Mississippi State, but now Max Johnson needs to replicate that performance. Auburn has a dangerous coverage unit that could give him headaches if the LSU line can’t protect him long enough.

Arizona State @ UCLA (10:30p/9:30p, FS1) will sing you off to sleep with the sweet sounds of crashing cars and general disaster. Sure, DTR and the Bruins beat LSU, and yes, their offensive attack is devastating when it works. But they have an abysmal pass defense that Arizona State will be hoping cures their woes. Here’s to hoping Jayden Daniels can give the Sun Devils a few touchdowns through the air this week.

That’s that! Whew, what a week. Happy watching, and follow me on Twitter at @WatchingFB for all the latest!

Dearest Player, Thank you for purchasing this copy of Playoffoly, college football’s most beloved board game since 2014. While I’m sure you and your friends are eager to dive into the fast-paced world of trading poll spots and earning national recognition, it’s important you understand the rules first. Just put yourself in the shoes of ...

Lessons to Teach Your Kids from the Alabama vs. Georgia National Championship

So you’ve decided to bring a child into this world. Bold. It’s never too early to expose your little one to the bitter disappointment of adulthood. And hey, since you’re already planning on indoctrinating them into the borderline cult that is college football fandom, why not start there? Here are six crucial lessons from this ...