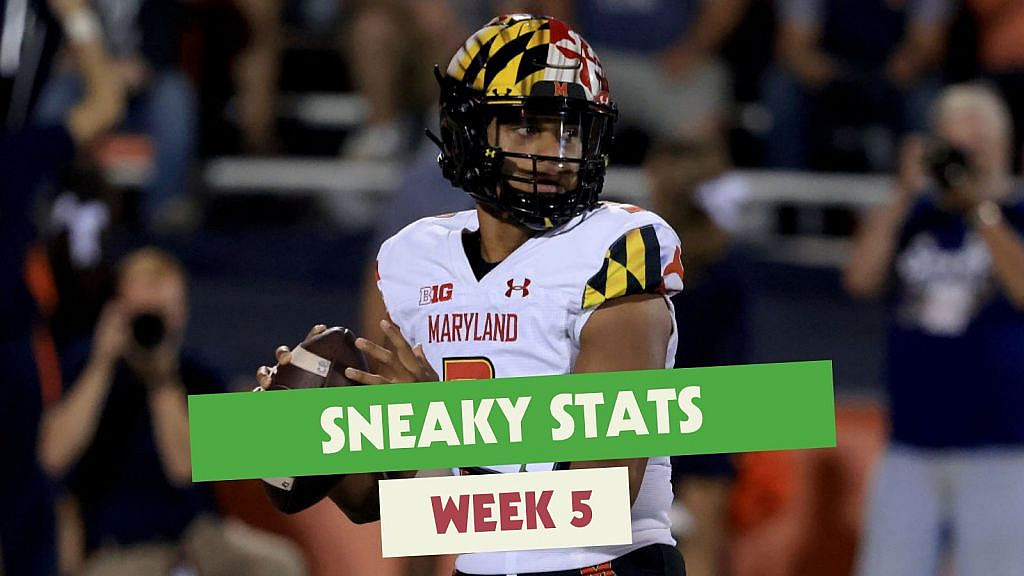 Welcome to back to the Sneaky Stats series! Week 4 was chock full with upsets, ugly clunkers, breakout performances, and most every team looking a little bad. Let’s take a brief look at some fun stats from Week 4, then look ahead to some sneaky stats that could impact Week 5 action!

– First things first. Clemson’s playoff hopes were all but completely dismantled in their gut-wrenching loss to a very good NC State Wolfpack team. Clemson somehow only ran 46 offensive plays in a game that went to double overtime. NC State ran more than double that with 96. However, if there is any silver lining for Clemson, it would be their defense. They held NC State to just 4.02 yards per play. For reference, that’s almost exactly what Vanderbilt is averaging in yards per play (126th in FBS).

– Speaking of incredible defenses, Texas A&M and Arkansas shut each other down almost completely. Outside of completions to Treylon Burks (6 receptions for 167 yards and a score) for Arkansas, both teams combined for 4.52 yards per play, completed 47% of their passes, and converted less than 25% of their third downs. Arkansas may actually be a legit contender this year.

– Notre Dame scored 31 unanswered points in the final 14 minutes of their 41-13 victory against the Wisconsin BADgers. 21 of those points came off of a kick return touchdown and two pick sixes. And once again, none of those final 31 points were thanks to Jack Coan. Coan’s true yards per play (pass attempts, sacks, and rush attempts) now ranks 98th in the nation among QBs with at least 50 total plays. Yes, the Irish are 4-0, but if they’re serious about winning games against teams with functional offenses, they’re going to need to smash the upgrade button at QB and put Tyler Buchner in the very first moment he’s recovered from his slight hamstring issue.

– After their victory over the apparently overrated Iowa State Cyclones this weekend, Baylor is now 4-0. They’re allowing the fewest points per game in the entire Big 12. They give up less than one passing touchdown and barely one rushing touchdown per game. Meanwhile, Iowa State’s offense is terrible outside of Breece Hall, the RB1 in next year’s NFL Draft. Hall’s accounting for 52% of the team’s yards and 7 of 12 total touchdowns.

– There aren’t very many good teams in college football, but Oregon certainly looks like one of them. They did allow 435 yards of offense against Arizona, but they also forced 5 turnovers, bringing their turnover margin on the year to +12, which leads all of college football. No other Power Five team has a better turnover margin than +7. And they’re forcing all those turnovers without a healthy Kayvon Thibodeaux. Lookout playoffs, here come the Ducks.

– Where to begin with Georgia versus Vanderbilt? The Bulldogs scored 35 points in the first quarter. They racked up more offensive yards on their first eight plays than Vanderbilt had the entire game. The Commodores’ top trio of pass catchers in Cam Johnson, Chris Pierce, and Will Sheppard entered the weekend averaging a combined 16 receptions per game. In this game: 2 catches for 16 yards combined. The Bulldogs tallied 8 touchdowns to the Commodore’s 4 first downs on the entire game. Massacre doesn’t even begin to describe what transpired in Nashville on Saturday.

– Oklahoma’s offense is apparently broken. They managed a total of 313 yards and one offensive touchdown against West Virginia this past weekend. As I mentioned last week, the Mountaineers entered the week allowing just 3.32 yards per carry dating back to last year and were the number one pass defense in the nation last fall. So yeah, they’re no slouch. But! Through three games against FBS opponents the Sooners have just three passing touchdowns and they’re averaging just over 5.6 yards per play (good for around 80th among FBS teams). Huge yikes.

– Last but not least, before we jump into Week 5 stats, “Texas is back!”, right?! Maybe. That or Texas Tech is still bad at defense. Maybe both? Either way, Texas has some promising talent that absolutely went off on Saturday. Bijan Robinson racked up another 191 yards from scrimmage and is now averaging 9.26 yards per touch over his last eight games. True freshman WR Xavier Worthy snagged three touchdowns against the Red Raiders and now leads all first year FBS receivers in…*takes a deep breath so I can actually list all these categories in one sentence*…receiving yards, receiving touchdowns, snaps, routes run, YAC per reception, yards per team pass attempt, and percentage of overall team receiving offense. And then there’s quarterback Casey Thompson, who dropped a smooth six touchdowns this weekend. Texas might be somewhat close to thinking about coming “back” soon, guys.

Listen to our Week 4 Recap

It’s Week 5 and Wake Forest, Baylor, Oklahoma State, Michigan, Michigan State, Maryland, Penn State, Kentucky, and Arkansas are all undefeated! Just like we all predicted. Those same teams, through their first four games last year, combined for a 15-21 record! Funny how much can change so quickly in college football. Anyway, it’s time to dive into some fun stats for Week 5 and see what other shenanigans this 2021 college football season might have in store for us…

Georgia and Arkansas are ranked 2nd and 5th in yards per play differential on the season. They’re both top 12 in yards allowed per game. Both are undefeated. Both are ranked inside the top ten. Yet somehow Georgia is an 18.5 point favorite as of this writing. The Bulldogs have only played one “good” opponent (and that’s if you actually count Clemson as “good”). In fact, their four opponents are barely averaging 20 points per game so far season. Arkansas is averaging nearly 36 per contest. This might be a closer game than you think.

The number of touchdowns Iowa has allowed all season on defense. And the number of touchdowns Maryland scored just last week. Iowa hasn’t allowed more than 418 yards in a game. Maryland has logged at least 481 yards of offense in every single game. The immovable object meets the unstoppable force in this matchup. However, Iowa hasn’t played a good offense yet. And Maryland hasn’t played a good defense. We’ll find out which of these team’s elite units are a fraud this week.

The average number of total offensive yards, per game, by which Notre Dame has outgained its opponents this season. I’ll say it again, more clearly. Notre Dame, on average, outgains its opponents by fewer than two years per game. How are they 4-0? Turnovers. They’ve forced seven more than their opponents. Cincinnati, on the other hand, outgains their opponents by an average of 122 yards per game this season. They’re also 11th in yards per play differential. This week may spark the downfall of the Irish.

The combined average points per game scored by Texas and TCU so far this year. Both teams are hitting their offensive stride, scoring a combined 13 touchdowns just last week. Neither are top 60 defenses in terms of points allowed per game. This could be an old fashioned Big 12 shootout!

The combined average yards per game between Ole Miss and Alabama in 2021. The Rebels put up 79 more yards per game than any other team in college football this season. Alabama is (for once) barely top 20 in total yards per game allowed and just nearly lost to Florida two weeks ago. Ole Miss runs 83 plays per game (second in the nation). The point total for this game is currently set at 80 and that might be too low.

Where Arizona State quietly ranks in yards per play differential among all FBS college football teams. After the “dossier” was released that seemingly lit the Sun Devils program on fire, many people left the team for dead. That was apparently an overreaction. They’ve outgained every single opponent this season in both total yards and yards per play. Even against BYU (their only loss, in Provo) they outgained the Cougars by more than 60 yards. This week’s matchup against UCLA will likely decide who wins the Pac-12 South and could launch either team into the Top 15 conversation.

Introduction Congratulations! A totally nondescript former college football powerhouse in the American Midwest — let’s call it, oh I don’t know, Penbraskigan State — has hired you to be its head coach. Throughout your tenure you will face a variety of challenging, arguably impossible decisions. To fend off the bloodthirsty legions of fans and boosters, ...