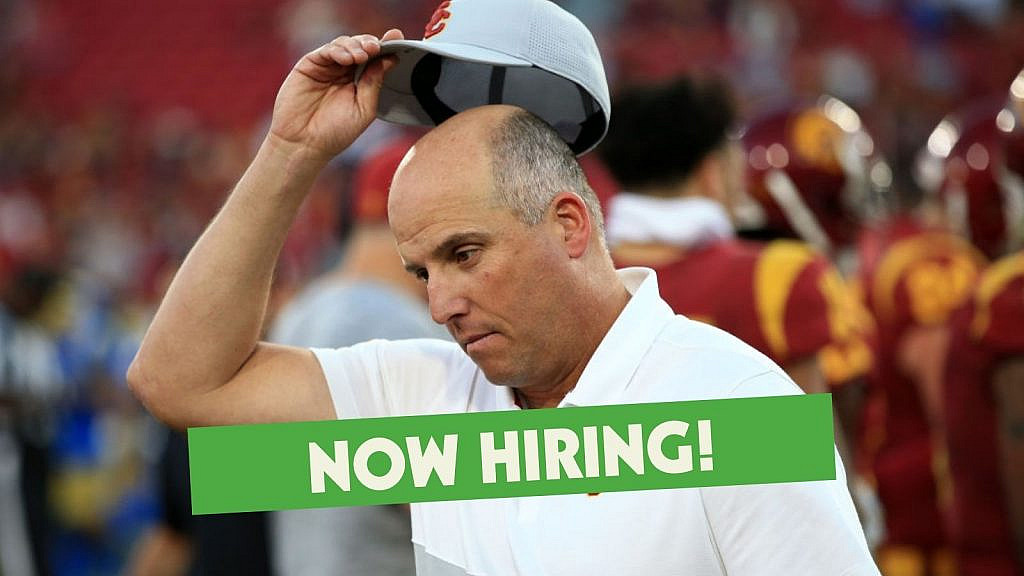 Are you a somewhat motivated self-starter with a loose interest in succeeding marginally? Where others see a clear path to the College Football Playoff, do you see nine ugly wins and a trip to the Holiday Bowl? Are you mostly free for the next three months or so?

If you answered yes to any of these questions, you sound like a great fit for USC football. The Trojans have an immediate opening and are looking to replace six-year interim head coach Clay Helton and could use your expertise. Only the biggest names will please our boosters, but that’s a battle we stopped fighting long ago. It’s anyone’s job until we ultimately settle for a B+ hire, so let’s find out if you have what it takes.

Welcome to Los Angeles, the city where the stars shine the brightest. Theoretically, I mean. Good luck picking out the Little Dipper through a nigh impenetrable layer of photochemical smog.

As head coach, you will serve as the face — be it as forgettable as Clay Helton’s or as punchable as Lane Kiffin’s — of USC football. Every week, you will command the intrepid Trojans under the sparkling lights of the Coliseum and the cold, unblinking eyes of the athletic department.

– Fielding unending questions about your job security.
– Winning games, but not by too much.
– Bringing in the best talent the West Coast has to offer that hasn’t already committed to Alabama, Clemson, Ohio State, Georgia, or a more recently successful Pac-12 school.
– Finding a way to score consistently that doesn’t involve passing 40+ times. You know, where a guy carries the ball and walks really, really fast with it? Whatever that’s called.
– Deworming Traveler. While many people assume USC hires specific personnel to tend to its iconic live mascot, this actually isn’t the case. Ever since former head coach John McKay insisted he and he alone take personal responsibility for Traveler’s gastrointestinal hygiene in 1961, the Trojans’ field general has been entrusted with maintaining a pristine bacterial environment through which only comically large carrots and the occasional congratulatory sugar cube may pass.
– Managing a variety of high-value assets including but not limited to:

– Ideally at least two years as a head coach, but honestly we’ll take pretty much anyone with a clipboard and a gleam in their eye.
– Display the Trojan spirit in everything you do. This means following a strict dress code, which contains the items below:

– Capable of lifting own bodyweight out of bed every morning knowing the unwinnable battle you are condemned to fight. Like Sisyphus before you, you will toil fruitlessly to get over a hump which has no perceivable summit. Every demonstrative victory over a conference rival will give way to a head-scratching defeat to an ostensibly inferior opponent.
– Able to carry both the legacies and the failures of those who came before you. This baggage is estimated to weigh something between 2.7 grams — equal to one stick of gum chewed by Pete Carroll — and 45.65 tons — the weight of a Boeing 737, the preferred charter plane of most college football teams and therefore the aircraft most likely parked on the LAX tarmac next to which Lane Kiffin was fired in late September 2013.
– Proficient in Microsoft Excel.

This position will pay $6 million per year plus contract incentives. Keep in mind that roughly 40% of that sum will end up going toward twice-weekly therapy sessions. The remaining salary will be split between the cost of living in one of the most expensive cities in America and groceries, depending on your number of roommates and the weight of your Whole Foods hot bar salad.

You will also receive health and dental, 401 (k), and the pride that comes with representing approximately the fifth most beloved sports team in Los Angeles.

USC was established in 1879 by a ragtag group of spirited citizens. Though it was extremely difficult to fund an educational institution at the time, the university’s founders secured financial backing by telling wealthy community members they intended to use the money to start a rowing team.

USC is an equal opportunity employer and does not discriminate on the basis of proven experience, personal vices, or competence.

This is not a real job posting. The preceding is entirely a work of satire and should not be taken seriously. Obviously.

Part of growing up is knowing what you don’t know. When you’re a kid, you learn by observing and asking. Originally, your knowledge just comes from your home life. Then you go to school and talk to your friends and maybe pay attention to class. Greater perspective means you know more. As the circle you ...

Believe it or not, we made it! Week Zero of the College Football Season is in the books and Week One is officially here! And so is our first Sneaky Stats column of the regular season. I hope you enjoyed all of our stats driven conference previews, but now we actually have some real numbers ...

College Football Week 6 Takeaways: All Aboard the Bandwagon!

In the world of sports, bandwagon fans receive slightly less admiration than your average war criminal and slightly more respect than your average Oklahoma defensive back. Needless to say, you don’t want to be accused of hopping aboard a hype train long after it’s left the station.