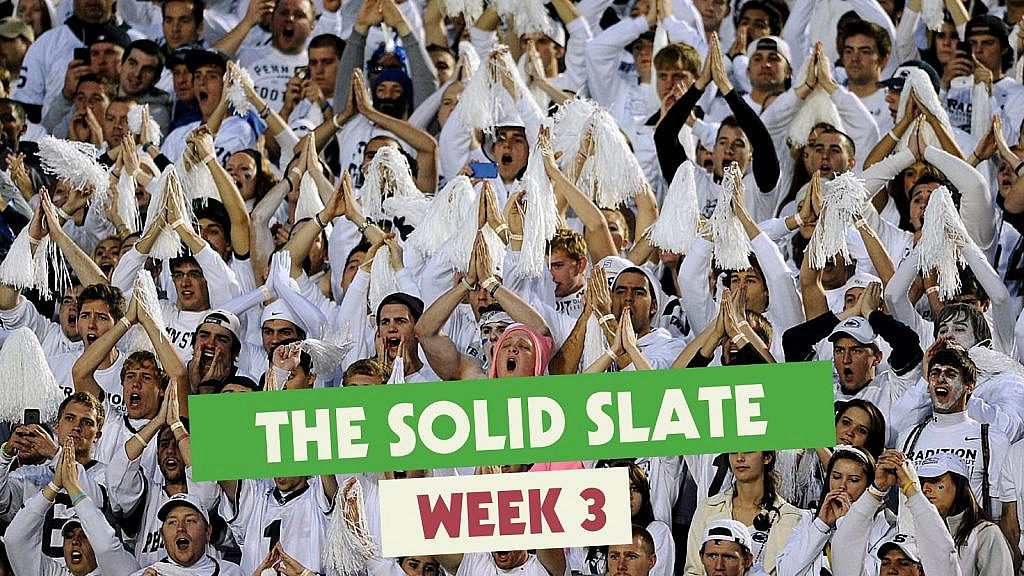 Remember learning about Newton’s Laws? An object at rest tends to stay at rest. An object in motion tends to remain in motion, unless acted on by an outside force. And every action has an equal and opposite reaction.

Not only are these laws staples of physics, they actually apply to college football too. By this week, we can see some trends in the direction, the motion, of some teams. A team that’s not going anywhere tends to stay in that state, mired in its own mediocrity, absorbed by internal struggle.

A team in motion, a team with momentum, should continue improving and succeeding unless they run into another forceful squad. And every injury, every scar, every success has a consequence that redounds back on the team.

Endless, constantly evolving timelines. Every season is its own universe, governed by these immutable laws. With so much to see, how will you know what you should watch?

That’s where I come in! Below I’ve broken down this week’s schedule for your viewing pleasure.

We can start off on Friday with UCF @ Louisville (Fri, 7:30p/6:30p, ESPN), where the Cardinals try to recover at home against the surging Knights, who already have a solid win over Boise State.  Louisville looked bad against Ole Miss, and this is a good chance to recover and get some momentum heading forward.

The weakest slate of games is around noon. Sleep in, go to brunch, take a swim if the weather’s still toasty enough for you. Or get that hard, endorphin-releasing workout in that you’ve been putting off this week. You’ll want to park yourself on the couch for the rest of the day.

Cincinnati @ Indiana (12p/11a, ESPN) starts us off. You may have written the Hoosiers off after Iowa dunked all over them during Week 1, but they looked better against Idaho, and they still have a stout D (even if the offense needs to improve).  Then there’s the Bearcats, an early New Year’s Six contender rounding into form after two tune-up games.  Cincy will be eager to show what they can do against a Power Five opponent.

Virginia Tech @ West Virginia (12p/11a, FS1) is your Secretly Decent matchup of the day.  Braxton Burmeister has the Hokies humming, coming off an astonishing Week 1 victory over the Tar Heels and a hard-fought win against Middle Tennessee State.  Their neighbors across the border in Morgantown are hungry for a linchpin out-of-conference victory after losing a close one to Maryland in Week 1.  The Mountaineers like scoring points, but the Hokies have held down opponents so far. Can that continue?

Alabama @ Florida (3:30p/2:30p, CBS) is jam-packed with intrigue. Who starts at QB in the Swamp?  Anthony Richardson looked stellar last week against USF, racking up 152 yards and 2 TDs on just THREE (!!) attempts. But Dan Mullen insists Emory Jones is his guy.  Then there’s new Heisman frontrunner in Bryce Young, who leads an Alabama offense with some new faces. Nick Saban will undoubtedly have Bama ready to roll in a huge road spot, but the Gators can spoil their hopes of undefeated dominance.

Mississippi State @ Memphis (4p/3p, ESPN2). This one hails from the Liberty Bowl! Tropical Storm Nicholas (what is it with Nicks and SEC football?) might impact this one as it deteriorates over the Mideast.  Clanga and the Tigers are both undefeated. MSU needs to rev up on offense, continuing their progress they showed against NC State last week. Memphis has shown clear vulnerabilities on defense, but features an explosive offense currently ranked first in the nation in total yards.

Auburn @ Penn State (7:30p/6:30p, ABC) should be an interesting heavyweight matchup. Beaver Stadium will be rocking in “whiteout” mode as the Tigers come to town. So far, Bryan Harsin’s boys have huge wins over teams they should’ve beaten, racking up the most points scored of any squad in the nation, and doing a ton of it on the ground. Penn State’s been tested a touch more, though, surviving a brutal opener against Wisconsin and taking care of business against Ball State. Do the Nits handle things at home, or can Auburn get a statement win in one of the toughest environments in the sport?

Virginia @ North Carolina (7:30p/6:30p, ACCN) is your seemingly weekly ACC separator. The Tar Heels (as mentioned previously) had trouble with the Hokies, but they’re looking to round into form with a solid conference win against the Hoos, who are coming off their own dismissal of Illinois.  Brennan Armstrong threw for five TDs in that game and looks to test his mettle against a Carolina defense that’s held opponents under 130 yards passing and 17 total points per game. Mack Brown could use a good win here to accelerate into a manageable schedule.

Fresno State @ UCLA (10:45p/9:45p, P12N) is the perfect #Pac12AfterDark game, if designed by a cadre of mad scientists. The Bruins have high hopes after embarrassing LSU (who may not be all that good, there I said it), but DTR will face a Bulldog squad that gave Buckeye-beating Oregon a run for their money. Fresno boasts a pass-heavy offense and, so-far, a solid defensive unit that could cause headaches for UCLA’s early hopes.

Arizona State @ BYU (10:15p/9:15p, ESPN) pits the Fightin’ Mormons, coming off an emotional Holy War win in a potential letdown spot, against the Devils, enemy of every religious man. ASU will be looking to move beyond off-the-field distractions and start their PAC-12 schedule with a bang.

There you go! Follow me at @WatchingFB on Twitter for news, takes, and reactions all season long. Until next week, happy watching!

Sneaky Stats for Week 12 of the 2021 College Football Season

Welcome to back to the Sneaky Stats series! In Week 11 we saw Baylor fans storm the field twice in their win over Oklahoma, Georgia allow more than 13 points, and an FCS team drop 42 points on an SEC giant in the first half alone! Let’s take a brief look back, and then a ...

As fall approaches, summer flings across the nation draw to a close. Perhaps you enjoyed a brief tryst with the NBA playoffs or a magical, once-in-four-years dalliance with the Olympic games. Now, it’s time to get serious and dive back into the dating pool. Week One, you went on first dates with a slew of ...

If you have already checked out the first two editions of this Sneaky Stats series (here or here), you may be noticing a pattern by now. There are quite a few intriguing, unexpected challengers in every single Power Five Conference this year who could rise to dethrone the king from its dominance. The SEC is ...