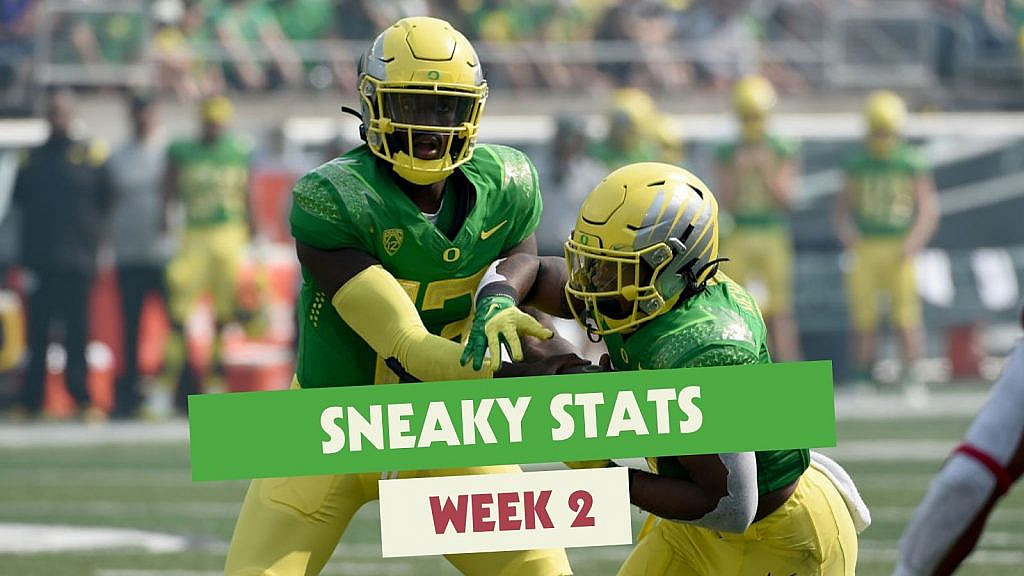 Welcome to back to the Sneaky Stats series! 83 of the 84 games involving an FBS football team in Week One action are a wrap! Only the high-flying flurry of points between Louisville and Ole Miss remains to be played. But, for now, it’s time to sift through that sea of Week One info to find a few fun takeaways and then look ahead to another exciting slate of games coming up in Week Two!

– Outside of Miyan Williams’ early touchdown run, Ohio State only managed 114 yards in the first half against the Golden Gophers last Thursday. That left some Buckeye fans already clamoring for a quarterback change as they trailed 14-10 at halftime. Then the second half happened. CJ Stroud went from zero to hero, completing 5 of 8 pass attempts for 236 yards and four touchdowns. That’s over 47 yards per completion in the second half. The Buckeyes now sit second in the nation in yards per play at 10.31.

– The only other FBS team with more than 10 yards per play after Week One is Auburn. It hardly counts, as they faced off against the Free Space of all College Football Bingo Free Spaces in Akron this week. The Akron Zips (still no idea what a Zip is, send help) lost their only good player in Teon Dollard, so they were good for just one offensive touchdown and 3.4 yards per play against the Tigers.

– But, hey, that 3.4 mark for Akron was still better than Clemson’s paltry 3.0 yards per play against Georgia. The game of the week was certainly a good match for four quarters, ending in a 10-3 Bulldogs victory, but it wasn’t fair in the trenches. Georgia sacked sophomore quarterback DJ Uiagalelei seven times on 44 drop backs. That’s about one sack per six dropbacks.

– Speaking of upsets, there were 62 games between opponents of differing competition levels (FCS vs FBS, Group of Five versus Power Five, etc.).  Eleven teams (around 18%) in the lower division of play won. Yes, the teams who were supposed to show up and get smashed actually pulled off the victory! Looking at you, Washington Huskies! How do you lose to the (FCS) Montana Grizzlies at home? Three interceptions, 2.4 yards per carry, and 4.9 yards per pass attempt, that’s how. Big yikes.

– Yes, UCLA defeated LSU, and that’s great. But Kayshon Boutte still dominated for the Tigers once again. He now has 36 receptions, 675 receiving yards, and seven touchdowns in his last four games for LSU. Boutte could very well be on the Devonta Smith production arc from a year ago. He’s a first rounder in the 2023 NFL Draft. Lock it up.

– And one last thing before we dive into Week Two. Alabama is still good at football. Bryce Young was near perfect. The defense was smothering. However, their rushing attack was worse than it’s been in years. They failed to eclipse even four yards per carry, and no running back logged more than 60 yards. It will be interesting to see how they fair against teams better than Miami.

Listen to our Week 1 Recap Pod

If you liked last week’s 84-game slate you’re going to love this week’s 82-game slate. Here are seven more sneaky stats to know heading into some of the biggest bouts between some of best bunches of ballers (couldn’t think of a “b” word for team) in all of college football this week.

The number of run plays the Oregon Ducks called in a one-possession victory over Fresno State last week. For reference, that’s more rush attempts than any non-triple-option offense averaged last season. And if there’s one area that Ohio State (Oregon’s Week Two opponent) showed it could be beaten in their game against Minnesota in Week One, it was on the ground. The Ducks have one of the most dynamic running back duos in the nation between CJ Verdell and Travis Dye, as well as a dual-threat quarterback in Anthony Brown. If Oregon wants to keep their College Football Playoff hopes alive, they’ll need to beat the Buckeyes on the ground, keeping the ball out of CJ Stroud’s absurdly efficient hands.

The total number of offensive touchdowns scored between both Iowa and Iowa State in their Week One matchups. Neither team logged a passing touchdown in their first game. But the plus is that neither team allowed more than 80 rushing yards or 10 total points, showing incredibly stout defense. It looks like the Cy-Hawk trophy is going to be won in a hard fought ugly defensive battle yet again. Iowa’s won this rivalry game five times in a row, but if Iowa State’s going to pull off the win, it might as well be in the year they’re ranked in the top ten.

The number of times the Tennessee Volunteers ran the football in their 38-6 victory over the ever-terrible Bowling Green State Falcons. That helped mask the fact that Joe Milton went 11 of 23 passing for 140 yards. And Milton was actually even worse than that stat line suggests. Before his final “heave and a prayer” touchdown to Cedric Tillman for 40 yards, he was averaging 4.5 yards per pass attempt against a bottom five defense. The Pitt Panthers (playing Tennessee this week) allowed just 42 rushing yards in Week One, and less than 100 rushing yards per game all of last season. If Tennessee’s going to have a fighting chance, Milton will need to improve drastically as a passer. Or Tennessee could just start Hendon Hooker, the superior passer, who already has a 96th percentile passing efficiency season on his resume with just as much rushing upside.

The number of yards per completion Stanford allowed against Kansas State, on top of giving up 200 yards on the ground in Week One. Meanwhile, the Cardinal’s Week Two opponent, USC, put up 416 yards of offense against the defending Mountain West Conference Champions in San Jose State in Week One. Drake London, their lead receiver, snagged 12 receptions (tied for the FBS lead among WRs). Unless Stanford fixes (everything?) on their defense, the Trojans will be up by three scores by the end of the first quarter. And to think this would’ve been a marquee matchup just a few short seasons ago.

The number of teams who averaged more than 10 yards per pass attempt this past week. Texas, Notre Dame, and Kentucky were the only three Power Five Conference teams to do it with brand new starting quarterbacks. We’ll see if Hudson Card, Jack Coan, and Will Levis can continue their efficiency in Week Two. Card and Texas face a much tougher challenge in Arkansas. Coan and Notre Dame will likely coast to victory against Toledo. But Levis and Kentucky get their first real challenge against Missouri, who just tallied nine sacks in Week One.

The number of touchdowns by which the Coastal Carolina Chanticleers are favored over Kansas. The Chanticleers haven’t lost to a Power Five Conference opponent since September of 2018. Kansas hasn’t beaten a Group of Five Conference opponent since September of 2018. That’s partially due to scheduling, but also partially hilarious. Kansas squeaked out a 17-14 victory over (FCS) South Dakota, who isn’t even the best FCS football team in their own state. Kansas running backs somehow managed to average less than 1.5 yards per carry and the team couldn’t even reach 250 yards of total offense. The Jayhawks were second worst in the nation in offensive yards per game last year. The Chanticleers were top 20 in yards per play a year ago. Coastal by 1000.

The yards per play that the Michigan Wolverines logged against the Western Michigan Broncos in Week One. That’s nearly double what they averaged a year ago as a team. Now they face off against a Washington Huskies team that just lost to an FCS squad (Montana Grizzlies) in Week One. If running back Blake Corum averages another 8.3 yards per touch and Cade McNamara maintains his efficiency, the Wolverines could open 2-0 with another lopsided victory over the struggling Huskies.

Going to college can be tricky. Be it clothes, textbooks, or your high school significant other, it’s easy to completely forget about certain things when moving in. As we enter Week Three of the college football season, it’s clear some teams left a few crucial items behind — specifically, their offenses. Whether it was Clemson ...

Sneaky Stats for Week 11 of the 2021 College Football Season

Welcome to back to the Sneaky Stats series! In Week 10, we saw Purdue take down yet another top five team, several glorious clunker games, and another week of Texas football failing miserably because that’s their official brand at this point. Let’s take a brief look back, and then a look ahead at Week 11 ...