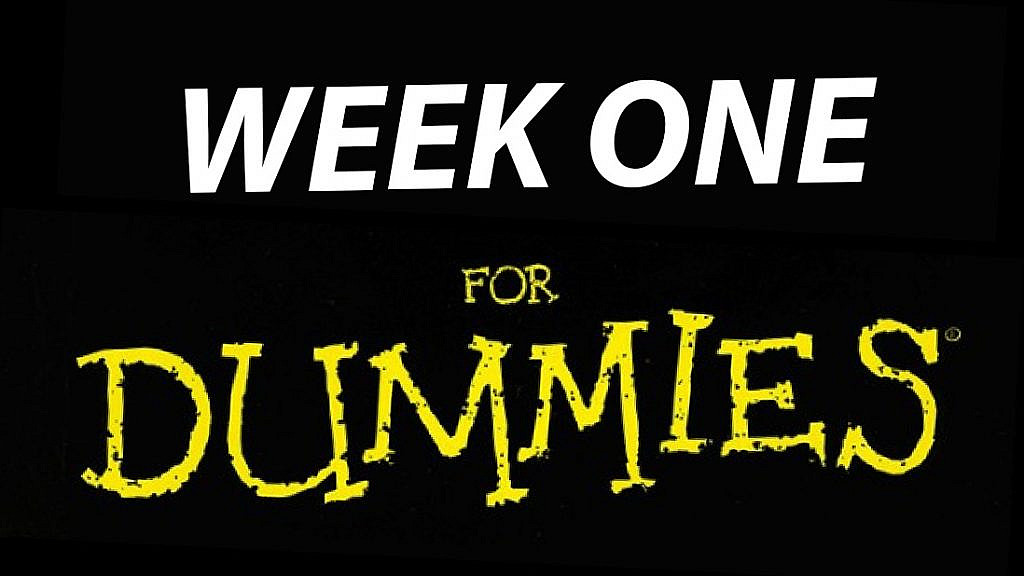 Week Zero. A minuscule scratch to the all-consuming, fiery itch for college football.

Please, NCAA, just a little bit more. It doesn’t even have to be the good stuff. I’ll take a sloppy Thursday night Sun Belt rock fight for all I care. Come on, man, you know I’m good for it.

But now, September. A triumphant return of the sport we hold so dear. It doesn’t matter who you root for, whether they’re in the top tier of playoff contenders or the slightly larger second tier of schools ESPN stops pretending to care about after week five, which roughly extends from Oregon to New Mexico State. There’s a way for everyone to have a blast this Saturday, and I’m going to prove it to you. Here’s how to love Week One no matter how decent or completely, utterly, embarrassingly awful your team is.

My team is definitely going to win

Before we get too far, make sure your team truly falls into this category and not the one below. For everyone who’s too confident or too blinded by optimism to be dissuaded, good for you. The rest of us losing sleep Friday night think it’s super cool that you aren’t concerned in the slightest.

How you spend Saturday largely depends on how you think your team will perform in its 11 other contests. If you’re Oklahoma and Saturday’s contest with Tulane is just one of many carefully curated cans of whoop-ass you’ll crack open this year, you can relax a bit. Unless you’re simply dying to know what your scout team defense looks like, you’re really only on the hook for the first half.

Once the game is officially out of hand, consider devoting your time elsewhere. Try cooking something new. Read some particularly compelling feminist literature. Flip on TNT and catch back-to-back broadcasts of Bad Boys and Bad Boys II. Don’t worry, I already checked TV Guide for you.

Meanwhile, if you’re Baylor or South Carolina, do not so much as flinch from your seat Saturday afternoon. I don’t care if you’re up 62-13 and your designated place kick holder is coming in to play quarterback. You savor every rare, precious microsecond in which your squad isn’t the one getting embarrassed on national television.

My team is totally going to win… right?

Why, thank you, I admire you being vulnerable with me. I promise I’m not about to fill you with visions of despair. You should have no trouble doing that yourself.

If you’re a loyal Longhorn concerned about Louisiana, take a deep breath. It’s probably going to be fine. I mean, sure, this is a Louisiana squad that beat Iowa State in Week One last year. And yes, many would argue the Longhorns are far more dysfunctional than the Cyclones were in 2020. But really, what are the odds of Texas underperforming against a team over which it holds a demonstrable talent advantage?

Speaking of Iowa State, 2021 should get off to a much better start with a cake walk versus Northern Iowa. I know 2019’s season opener against the Panthers was a little scarring, but all wounds heal over… time. Overtime. Northern Iowa. Hm. There’s something there, but I can’t quite put my finger on it. Oh, well. I’m sure everything will be fine and Brock Purdy will make very intelligent decisions in high-pressure moments.

Just take a chill pill, guys. Like Franklin D. Roosevelt wisely opined, the only thing we have to fear is fear itself. Then again, I’ll bet FDR would have sung a different tune if he had to debate the New Deal on the Senate floor against a plucky mid-major with a scrappy defense and a quarterback who can really spin it.

My team might win but also maybe it won’t and good lord, this is stressful

What a joy it is to watch a tightly contested matchup in Week One. That is, as long as your team isn’t involved. Otherwise, you’re in for weeks of anxiety that a heartbreaking loss will completely upend your team’s future. It’s like Doctor Strange in Avengers: Infinity War foreseeing a multitude of possible outcomes, and 14,000,604 of them somehow end up at the Cheez-It Bowl.

I empathize deeply with fans of schools like Wisconsin and Penn State, Indiana and Iowa, West Virginia and Maryland, Kansas State and Stanford. You spend the summer obsessively gathering as much information as you can on your Week One opponent. Practice reports. Message boards. The third-string long snapper’s aunt’s Facebook page. Was their quarterback’s breakout performance in yesterday’s scrimmage a fluke or should I be worried? Either way, I’m definitely going to have to try Aunt Debbie’s weeknight spanakopita recipe. You can never have too much intel.

If you’re like me and your school is slated for a top-25 showdown Saturday, you should be right around the “making candle-lit bargains with ancient deities” phase of the coping process. I know, I know. I should learn to accept things that are beyond my control. One loss in September is not going to define an entire season. Still, it couldn’t hurt to see if the mighty and terrible Zvilpogguha has any strong feelings about the condition of Michael Penix Jr.’s ACL.

My team is definitely going to lose

Hey man, that sucks to hear. Really sorry about that.

I want to be very clear that this section does not simply pertain to all FCS or Group of Five schools. Some of those are actually watchable. I’m talking about the real lost causes that Vegas expects to lose by three scores or more. You know, like Nicholls State, Kent State, Miami (OH), and Miami (the one that has to play Alabama).

Maybe you’re still holding on to a vestige of hope that your squad will rally together and pull off the upset. “If we can stretch them out wide on offense, we’ve got a chance,” you tell yourself. “I’ve been watching practice footage and our QB has all but mastered the six-yard slant.”

But these are pretty lies told by sweet summer children for whom December is a frostbitten wasteland, an unforgiving tundra through which only the occasional Frisco Bowl bid tumbles. Yet not all is lost. Remember, Power Five institutions shell out heaps of cash for these easy wins. For example, Auburn is paying Akron $1.8 million, which seems like a lot but is actually the widely accepted market rate for making Bo Nix look competent for four whole quarters.

So take solace, Zips fans. Sure, you’ll never topple the Tigers on the gridiron, but Auburn’s art department had better be on upset alert with all the new kilns Akron’s ceramics program is about to buy.

David Lowery’s The Green Knight starring Academy Award nominee Dev Patel is a surrealist deconstruction of the titular Arthurian legend. Lowery subverts the mystique of knighthood through man’s unfailing vulnerability to pride and temptation. This gripping audiovisual masterpiece welcomes viewers to a world in which magic is mundane, yet the greatest miracles lie in a man’s ability to see his own moral shortcomings. And luckily for fans like you, it’s still showing in select theatres across the country. Consider spending your Saturday afternoon watching it instead of whatever bummer of a football team you root for.

Look, I know we as fans are supposed to cheer through the final whistle of every bitter defeat. But, come on. Do you honestly think I’m going to tell Arizona faithfuls to watch their Wildcats lose to BYU? Yeah, Syracuse should beat Ohio. But why subject yourself to 60 minutes of that when basketball season is two months away?

If you insist on sticking it out, more power to you. College football needs fans who will stand by their teams no matter how hard they fall from grace. That’s the sort of nobility for which Patel’s Sir Gawain strives on a journey interwoven with seduction and humility. Seriously, it’s such a good movie. Are you absolutely positive you want to watch Garrett Schrader and Tommy DeVito take turns overthrowing receivers?

The Big Ten West and MAC West Preview for 2022

What College Football Games Are On TV? Championship Week (12/4)

I spent Thanksgiving a week ago with my family. It was wonderful seeing everyone in person again, sitting around a big feast, laughing and talking about anything and everything. Then, I sat at a feast of a different kind last Saturday, as Rivalry Week delivered in a huge way. Watching Michigan finally get a dub ...