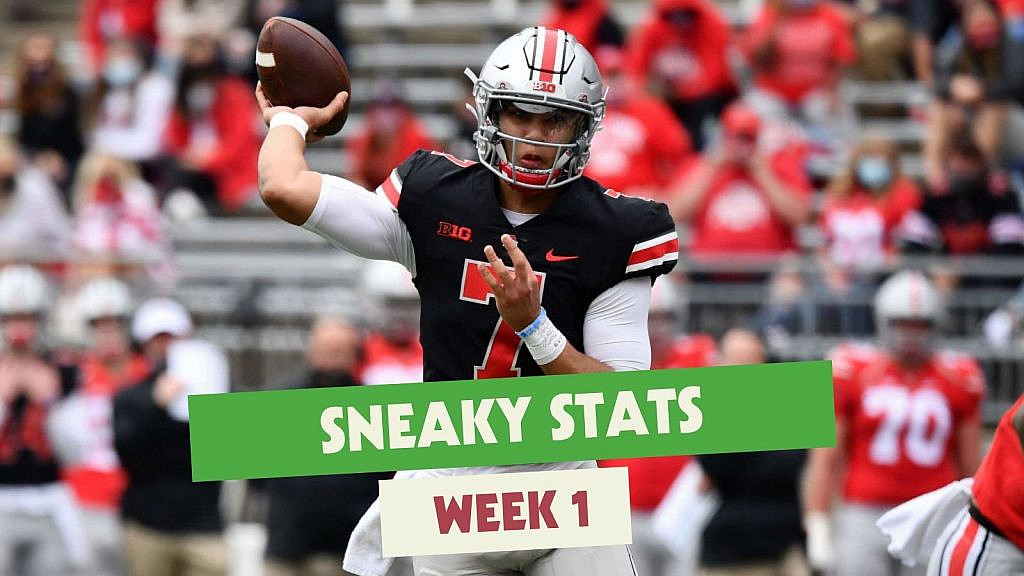 Believe it or not, we made it! Week Zero of the College Football Season is in the books and Week One is officially here! And so is our first Sneaky Stats column of the regular season. I hope you enjoyed all of our stats driven conference previews, but now we actually have some real numbers to dive into!

First, before we dive into Week One action and some numbers to consider in some of the marquee matchups, let’s take a look at just a few fun stats from the action this past weekend!

– Despite it being 117 degrees on the field in Fresno and both teams pacing intentionally slow, the Fresno State Bulldogs still managed to run 74 offensive plays and coast to an easy 541 total yards of offense. Good for more than five times the offensive yardage amassed by their paltry opponent, the UConn Huskies. UConn is clearly trying to be the worst team in all of FBS after more than 600 days off from live game action. They punted 11 times and averaged an impressive 1.65 yards per play. For reference, no team in the nation averaged less than 3.2 yards per play in 2020.

– Zach Charbonnet and Brittain Brown combined for 184 yards on the ground and 219 yards from scrimmage for the UCLA Bruins in their absolute thrashing of Hawaii. Charbonnet, the Michigan transfer, racked up 120 yards on just seven touches, just 45 less yards than he totaled all of last season. Watch for his name to rise up draft boards quickly.

– The Nebraska-Illinois mess gave us a safety as the first points scored, a +7 underdog cover, underdog money line win, under on the point total, a victor with 19 pass attempts, nearly 450 yards in punts, and was still somehow entertaining! Illinois likely won the ugliest 30-22 game in the history of the sport, but it still counts!

– Jacob Cowing jumped out to an early national lead in receiving yards with five receptions for 158 yards for UTEP. He already accounted for 42% of the Miners receiving offense a year ago, but his dominance was even more absurd against the New Mexico State Bad Football Players (I think that’s their official mascot). Cowing snagged the only receiving touchdown and accounted for 63% of the team’s receiving yards. Bonkers numbers that could get him drafted one day!

But that’s enough of the past. Let’s get back to the future (insert bad Marty McFly joke here)!

There are 84 college football games that include an FBS Division I football team between now and Labor Day (which is somehow next Monday already). That means two things: 1) I can’t fit an interesting stat about each one in this here article 2) There are going to be a plethora of terribly lopsided Week One matchups between FBS schools and “East West Upside Down State” schools. But! Here are some fun (maybe sneaky) stats to know heading into some of the bouts between some real universities in Week One of the College Football season.

That is the number of pass attempts C.J. Stroud has thrown for the Ohio State Buckeyes in an actual game. However, that is the exact same number Justin Fields had thrown before his 41 touchdowns to just three interceptions in the 2019 season. Stroud, a former fringe four/five star recruit finished first in his Elite 11 Championship competition in high school, beating out both DJ Uiagalelei (Clemson starting quarterback) and Bryce Young (Alabama starting quarterback). Stroud has two likely first round wide receivers to throw to in Garrett Wilson and Chris Olave that should easily push him into early season Heisman contention. Oh, and Buckeyes by 1000 against Minnesota who will likely being missing their WR1. Book it.

That is the number of yards from scrimmage that the North Carolina Tar Heels are missing from just four playmakers on last year’s offense: Javonte Williams, Michael Carter, Dyami Brown, and Dazz Newsome, all of whom are in the NFL now. They’re also going to be missing their only proven veteran receiver this week in Beau Corrales. That means they’ll be missing almost exactly 5,000 yards and 50 touchdowns from last year’s offense in Week One. The good news? Virginia Tech is also replacing their best quarterback and 1,362 yards from scrimmage in their only real playmaker from a year ago in Khalil Herbert. Plus, the Hokies are a sad 41% against the spread since 2019.

Wisconsin (1st) and Penn State (1oth) both ranked inside the top ten last year in average time of possession. Something’s got to give for two teams who love to play ball control averaging over 40 carries per game in 2020. The difference may hinge upon whether the Badgers star running back, Jalen Berger, is healthy or not.

The number of touchdowns Alabama offensive players scored on last year’s team who are now in the NFL. The Crimson Tide always reload, but if they’re ever going to be anything near “vulnerable” it will likely be Week One in 2021. Keep in mind that they’re installing a new quarterback and entire set of starting offensive playmakers against a Miami team returning 96% of it’s rushing and over 80% of its receiving production from last year’s squad.

The number of victories for Louisiana-Lafayette last year. That includes an eyebrow-raising upset over Iowa State in Week One. Can they catch lightning in a bottle twice by stealing a W against Texas this week? If they do, it will be without their two leading rushers from a year ago who accounted for nearly 2000 scrimmage yards in 11 games. They’ll also have to stop Bijan Robinson, who averaged just shy of 12 yards per touch in his final four games last fall for the Longhorns. That could be tough considering the Ragin’ Cajuns were barely a Top 100 team at stopping the run a year ago.

The possible number of stud transfer players that Georgia hoped to have as starters against Clemson this Saturday. Former five star quarterback JT Daniels, five star tight end Arik Gilbert, five star corner Derion Kendrick, and wily veteran defensive back Tykee Smith all should contribute. However, Gilbert hasn’t been practicing with the team and Tykee just had surgery a little over a week ago. Clemson is replacing two first round picks in Trevor Lawrence and Travis Etienne on offense, but don’t let that fool you. They have two more five stars in DJ Uiagalelei and Will Shipley set to explode in their stead.

The current betting point total for the Louisville Cardinals and Ole Miss Rebels matchup and the highest on the entire slate. That’s probably an entire touchdown or more too high. Ole Miss is also favored by nearly 10 points. That’s likely three or four points too many as well. Why, to both questions? Despite all the inconsistencies and turnovers from Louisville a year ago, they were actually 16th in the nation against the pass (Ole Miss’ primary strength). Also, Malik Cunningham was a 98th percentile efficiency passer in 2019. If he handles the turnovers, Louisville will play ball control and limit the Ole Miss possessions. Don’t think so? Louisville was 90th in plays per game a year ago.  They know how to slow it down. That could both limit the point total and keep the game closer than the currently projected line.

Sneaky Stats for Week 8 of the 2021 College Football Season

Welcome to back to the Sneaky Stats series! Week 7 brought us a new Heisman candidate, another loss from a top ten team, and plenty of sneaky stats to break down! Let’s take a brief look back, and then a look ahead at Week 8 and beyond! Week 7 – It may still be a ...