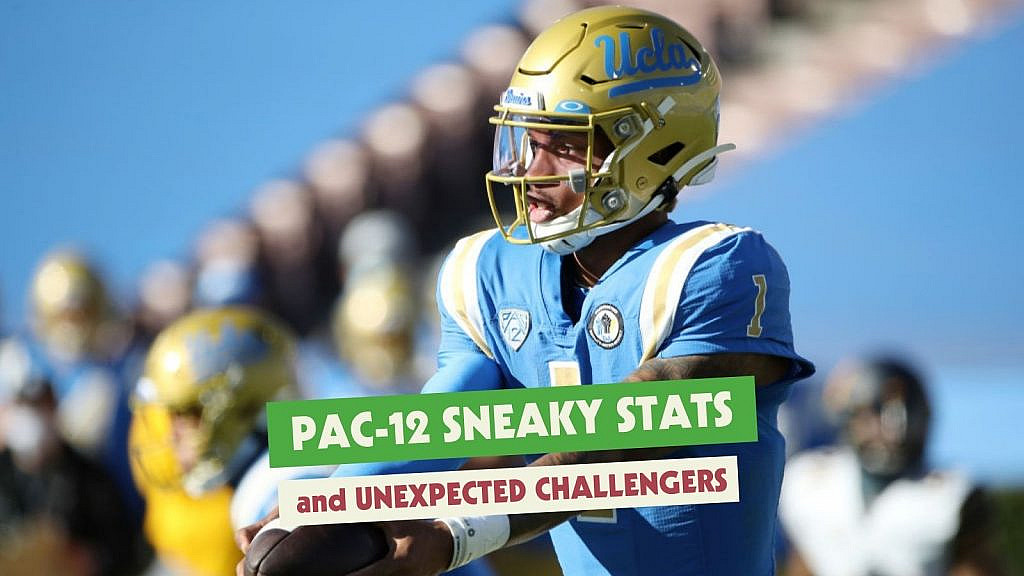 The 2021 College Football season is almost upon us! Welcome to the final conference preview in this Sneaky Stats series before Week 1 officially kicks off! If you missed the first four installments you can find the SEC here, the Big Ten here, and the ACC here, and the Big 12-ish here. This week, we’ll be digging into the Pac-12 Conference! Who should really be considered the favorite to win the conference? With zero AP Top Ten teams, is the Pac-12 the most wide open competition in all of college football?

If we look at recent history, the Pac-12 has provided us with perhaps the most parity of any Power Five conference. Four different schools have won the conference in the last six seasons. The entire conference (except for Oregon State) averages in between 5 and 8.29 wins per season in the College Football Playoff era. And the top five teams all average between 8 and 8.29 wins per season in that same span. The competition at the top has been constantly fierce. And this year is no exception.

The top five teams in the conference all find themselves ranked between 11th and 25th in the initial AP Poll (that Ty Hildenbrandt loves so much) and somewhere between 8 and 9 projected wins according to Vegas. And 9 of the 12 teams rank inside the top 20 in returning production from a year ago, so the conference returns perhaps the most veteran player pool in history. So who’s the real favorite? And can any team truly win this year? Let’s dive in.

The Pac-12 may not be the “best” recruiting conference, but it certainly has some depth. Seven Pac-12 teams rank inside the top 28 in the College Football Playoff era in terms of recruiting. And even if we just look at the last five years, there are still several teams with decent recruiting pedigree.

If you’ve been following along with other previews in this series, the first thing you may notice is that the Pac-12 lacks a true “alpha” in recruiting with zero teams averaging a class rank inside the top ten.

“That’s because the Pac-12 is terrible.”
– SEC fans who go to bed before Pac-12 After Dark, probably

The Pac-12 may lack that recruiting alpha like Alabama, Ohio State, Oklahoma, or Clemson. However, there’s certainly a fun big three: Oregon, USC, and Washington. They’ve all brought in at least four-star or better rated recruits in the last five classes. But Oregon’s been absolutely dominant here recently given the depth of their classes, filling things out with over 60 three star players too.

Oregon also returns a future top ten NFL Draft pick edge defender in Kayvon Thibodeaux and just about their entire starting lineup on both sides of the ball minus an “okay” quarterback (Tyler Shough) and one decent starting cornerback (Deommodore Lenoir).

USC is stacked with recruiting pedigree on the defensive side of the ball, but their biggest x-factor comes in the form of former three star quarterback Kedon Slovis. If he posts another 94th percentile passing efficiency season like he did as a true freshman, USC could coast to the Pac-12 Championship game.

Washington didn’t lose a ton from last year’s roster, but the players they are missing were incredible. Elijah Molden was one of the best defensive backs in program history. He’s now with the Tennessee Titans. Zion Tupuola-Fetui accounted for seven of the team’s ten sacks last year and he’s out with an Achilles injury for at least most (if not all) of this season. That could be a problem.

Outside of the big three things still look quite fun, too!

– UCLA is ranked 2nd in the nation in returning production and their current stable of players is pretty stacked. They rank fourth in recruiting in the last five years. Dorian Thompson-Robinson averaged nearly 330 yards of total offense at quarterback in his four complete games last year. And they just brought in former Top-50 recruit Zach Charbonnet to help bring some power to the running game. UCLA, despite typically underperforming in recent years, looks like they could beat any team in the conference.

– Utah’s Charlie Brewer went 15/15 in the spring game, so that’s… cool? They desperately need offensive playmakers to step up if any Utah quarterback’s going to find success this fall.

– Arizona State returns a stud quarterback in Jayden Daniels, a quartet of four-star sophomore wide receivers, and one of the most efficient backfields in the country in Rachaad White and Deamonte Trayanum.

Once you enter the back half of the conference, things get a little ugly:

– Stanford has recruited well, but returns virtually no production from a year ago and will run entirely through one player: running back Austin Jones.

– California won’t be able to score (111th in points per game last year).

– Washington State won’t be able to stop anyone from scoring (119th in points allowed last year).

– Colorado should be fun to watch with dual-threat quarterback Brendon Lewis at the helm, but he has no one to throw to.

– Oregon State ranks dead last in Power Five recruiting (yes, even behind Kansas) in the last five years and just lost Jermar Jefferson and Hamilcar Rashed to the NFL. Yikes.

– Arizona might as well play FCS ball this year. They lost their quarterback via transfer, their starting running back to the NFL, rank third to last in the conference in returning production, and have a completely new coaching staff.

Among the six schools with a fighting chance this year, which unexpected units (offensive or defensive) will be the ones that truly make a difference in deciding who takes the conference this year?

Listen to our Pac-12 North Preview

Oregon Offense – Oregon is the reigning conference champ. Assuming they decide to start Anthony Brown, they’ll be rolling out a quarterback who hasn’t played a full season of football since 2018. Many may not expect their offense to be what saves them this fall. However, the Ducks just brought in their best WR recruiting class ever, highlighted by their highest rated receiver recruit in school history in Troy Franklin. Plus, their duo of CJ Verdell and Travis Dye is incredible. Dye was the second most efficient back in the conference with more than nine yards per touch last fall.

Washington Defense – Their offense won’t be able to keep up with much of the Pac-12 in a shootout. They haven’t ranked inside the Top 40 in points scored per game since 2017. And yes, their best pass rusher, Zion Tupuola-Fetui, suffered a torn Achilles tendon in the spring. However, he could apparently still return this season? If ZTF comes back and Edefuan Ulofoshio averages nearly 12 tackles per game again, Washington’s defense could still find a way to dominate like usual.

Arizona State Offense – How many of you realized that Arizona State finished 12th in points scored per game, averaging more than 40 points per contest last year? And not only that, but the Sun Devils were efficient too. They led all Power Five teams in yards per carry last fall thanks in part to Rachaad White’s insane 420 rushing yards on 42 carries. They return decent depth across the board, but they continue to place coaches on administrative leave due to their off-season scandal. Their own internal mess may be the only thing standing in the way of a Pac-12 Championship.

USC Backfield – We already know about Kedon Slovis. Drake London and company will dominate at wide receiver per usual. The running backs could be the difference this year. Keaontay Ingram and Darwin Barlow, along with team captain Vavae Malepeai, compose a backfield that brings immense experience. Between the three of them, they averaged nearly 40 touches per game a year ago. USC should find much greater ground success with that trio.

Utah Defense – They’re fifth in the nation in returning production on the defensive side of the ball. With a new quarterback at the helm (Charlie Brewer or Cameron Rising) they’ll have to rely heavily on the defense if they want to be competitive at all.

UCLA Offense – After losing the focal point of last year’s offense in Demetric Felton, some will second guess their offense. QB Dorian Thompson-Robinson brings 25 games of experience. Greg Dulcich was the most efficient tight end in football last year averaging nearly 20 yards per reception. I already mentioned Zach Charbonnet as a backfield pedigree bump, but Brittain Brown actually averaged over seven yards per touch last year. They also brought in a back-to-back 2000-yard rusher in true freshman Deshun Murrell. There’s a chance UCLA is the most efficient offense in the Pac-12.

Just like the other conference previews, I pulled win totals from six different sources to create an aggregate projected win total, rounded to the nearest half-win, to find potential values to target this season.

Full disclosure, I don’t have a single Pac-12 regular season win total in play as of this writing. The parity among the top teams is scary, and the bottom six in the division could all be truly terrible. But! There are still a few potential upside plays out there.

UCLA has sex appeal with their offense, recent recruiting pedigree, and returning production. Their win total of 7 actually has the juice leaning towards the over at most books. However, their schedule is brutal. They play all five ranked Pac-12 teams, LSU, and only two Group of Five Conference teams. If they drop even one game in which they’re favored, they likely hit their under just due to their schedule.

USC is maybe the best play among the “favorites” in the mix to win the conference this year. They have an NFL quarterback, filled out key skill positions, pedigree on defense, and most importantly, play all four of the worst Pac-12 teams in Colorado, Oregon State, Stanford, and Arizona. Not only that, but they’ll likely be favored in at least ten of their games with the only exceptions coming at Notre Dame and Arizona State. They’re in a prime spot to challenge Oregon, the definitive true “favorite to win the conference.

Lastly, Colorado got absolutely screwed with the schedule this year. They play Texas A&M and all five ranked Pac-12 teams (immediate 6-game ceiling without blinking). They may only be favored in two or three games, just lost a presumptive quarterback to injury, but still have their line sitting at 4.5 nearly everywhere.

By now, I think we all understand the top 10 is a social construct. Every week, the Associated Press ranks college football teams for the chief purposes of adding weight to games and, perhaps more importantly, blatantly disrespecting your favorite team. Therefore, it doesn’t really make sense to react strongly when a top-10 squad loses. ...

After a handful of successful weeks, the universe evened out. It was the most predictable possible outcome. Such is the ebb and flow of betting on sports. Last week's confidence in Ole Miss and both Kansas teams was ill-advised.