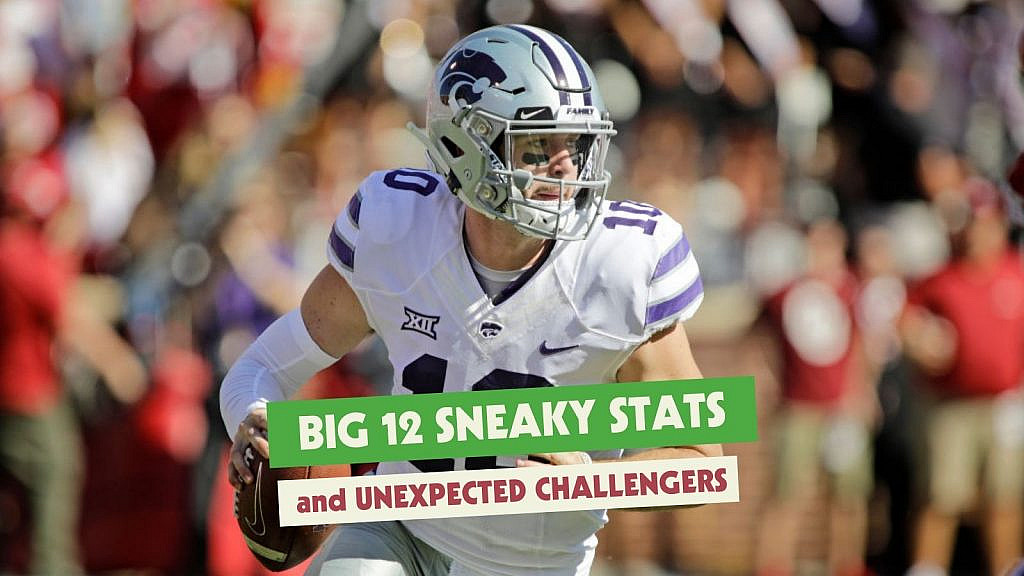 The 2021 College Football season is almost upon us! Only two more previews to go in this Sneaky Stats series before Week 1 kicks off! If you missed the first three installments you can find the SEC here, the Big Ten here, and the ACC right here. This week, we’ll take a look at the Big 12 (technically Big 8 now, I guess) Conference! Can anyone challenge Oklahoma? Is Iowa State a legit playoff contender? Is Texas back? All that and more, right here!

First off–and I promise this doesn’t give everything away up top here–it would be fair to say that betting on anyone besides Oklahoma to win the Big 12 is probably just lighting money on fire. The Sooners have won the conference six years in a row, averaging over 11 wins per season in that span. They’re 32-5 against the Big 12 with an average overall margin of victory in all contests coming in around 17 points per game in the Lincoln Riley era. And it certainly doesn’t hurt their chances returning a future first round quarterback in Spencer Rattler. Can anyone challenge the Sooners?

If anyone can, it’s probably the team that’s already beaten the Sooners twice in the Lincoln Riley era, once just a year ago with Spencer Rattler at the helm. Who could do such a thing? Mr. Matt Campbell and the feisty Iowa State Cyclones. The Cyclones have quickly risen from the ashes of back-to-back 3-9 finishes to a collective 32-19 record since 2017 capped off by their 9-3 finish and Fiesta Bowl win just a year ago. But can they finally put it all together, beating Oklahoma and perhaps pushing for a playoff bid?

And is Texas ever really going to be back? They keep recruiting well, yes. But they’re tied for seventh worst in the Power Five in wins over expectation during the College Football Playoff era given the percentage of four and five stars on their roster. In fact, Texas has six less wins than any of the other top 14 recruiting schools in the nation since 2014, and 27 less than Oklahoma. Big yikes.

But if it’s not Oklahoma, Iowa State, or Texas, can anyone else challenge for the Big 12 title this year? Let’s take a look.

Putting it nicely, the Big 12 is absolute hot steaming garbage at recruiting outside of Oklahoma and Texas. How hot? How steamy, you might ask? Let’s just look at the recruiting classes over the last five years by number of 3-, 4-, and 5-stars, and average class rank.

Both Oklahoma and Texas have brought in at least 69 four and five star recruits in the last five years. TCU is the closest to them in that category with a whopping 20. The average CFB Playoff era team recruiting class rank for the “Big 8” (who will remain in the post-Sooners-Longhorns “Big 12”) is 47th. Cincinnati ranked 44th this year. Memphis was 47th.

One might venture to label the Big 12 talent pool outside of Oklahoma and Texas as “bad” or “embarrassing” or perhaps both if we’re going for the most accurate description.

But! TCU does have one five star difference maker on offense in running back Zachary Evans who averaged nearly eight yards per touch last fall. They also have a top tier deep threat at receiver in Quentin Johnston who accounted for nearly 27% of TCU’s receiving offense in the games that he played as a true freshman last year. And they are third overall in the conference recruiting recently. There’s room for optimism.

Oklahoma State returns veteran quarterback Spencer Sanders and super senior quarterback-of-the-defense Malcolm Rodriguez. Rodriguez’s 268 total tackles over the last three seasons is the most among all returning players in the conference.

West Virginia is an impressive 19th in returning production among all FBS schools, good for second in the conference.

And last but not least, Iowa State may recruit poorly but they return perhaps the best running back in the nation in Breece Hall, fourth year starter Brock Purdy at quarterback, and truthfully, almost their entire starting lineup from a year ago. They’re fourth in returning production among all FBS squads.

But which unexpected units (offensive or defensive) will be the ones that truly make a difference in deciding who takes down the conference this year? Spoiler alert before we dive: Kansas still doesn’t matter. They rank second to last in recruiting and dead least in victories in CFB Playoff era among Power Five Conference teams. Sorry, Jayhawks fans.

Kansas State Offense – Whoa! Why is Kansas State listed first? To be honest, it’s mainly because I haven’t mentioned them yet. But also there’s this one other thing: Kansas State has beaten Oklahoma two years in a row, racking up 86 total points in those two games. How? Sorcery, probably. But also Skylar Thompson is actually quite good and certainly underrated. He scored eight total touchdowns in the two wins over Oklahoma. If he can continue the magic with Darren Sproles clone Deuce Vaughn making plays out of the backfield they should be able to keep up with anyone.

Oklahoma Defense – The Sooners offense returns a first round quarterback, the deepest receiver corps in the Big 12 with Marvin Mims, Theo Wease, Jadon Haselwood, Mike Woods (Arkansas transfer), Mario Williams (Top Four Star freshman), and Austin Stogner at tight end. There will be no surprise when they dominate on offense. But it’s their defense that may be unexpected. The Sooners return two top 12 pass rushers in the nation from a year ago in terms of pressures: Nik Bonitto and Isaiah Thomas. If they can figure out depth at defensive back, they’ll coast to the playoffs again.

Texas Offense – On paper, losing Sam Ehlinger looks like it may hurt quite a bit. But! Bijan Robinson, the former five star running back, averaged 11.8 yards per touch in his final four games last fall for the Longhorns. (Seriously, wow.) Casey Thompson tossed four touchdowns on ten pass attempts in their bowl game last year (and Hudson Card is probably even better). If true freshman Xavier Worthy turns into a game changing playmaker at receiver alongside Joshua Moore, Steve Sarkisian’s Texas offense may be one of the best in the country. They could actually be “back” if the cards fall just right.

Iowa State Defense – Everyone knows Breece Hall and Brock Purdy, but Iowa State’s defense is absolutely stacked too. Mike Rose, linebacker, won Big 12 Defensive Player of the Year last fall. Will McDonald IV, edge defender, led the entire nation with 10.5 sacks. Plus, Iowa State has killed it as an “under” play since 2017. Their games finish under the betting over/under point total nearly 65% of the time (highest rate in the Big 12). Their defense will be the difference again this fall.

Just like in the other conference previews I pulled win totals from six different sources to create an aggregate projected win total rounded to the nearest half-win to final potential values to target this season.

The easiest smash play on the board is obviously Kansas State. Thompson is back at quarterback, and regardless of how loudly K-State fans lie to themselves, Will Howard was atrocious last year. He wasn’t even a 10th percentile passing efficiency quarterback last fall. Huge boost there considering they went 4-6 without Thompson. Then you look at their schedule. They open with Stanford, who is in terrible shape on both the recruiting trail and in terms of returning production (111th nationally). Next up, a surefire win against Southern Illinois. Followed by a matchup with Carson Strong and Nevada, which is tricky but should be another win. Kansas and Baylor should be two more wins. All the Wildcasts need is one more outside of that.

Baylor is almost sneaky due to the fact that they’re returning almost all over their production from a year ago outside of the quarterback and RB2 position. They do return one of the best linebackers in the nation in Terrel Bernard too. But that’s not going to be enough.

Texas Tech is interesting just because of returning skill position players and the Tyler Shough transfer at quarterback, but not a safe bet.

Iowa State is trendy and fun, but betting over 9.5 would be a program record and the backend of their schedule is incredibly tough.

The only other plays worth considering: Texas and Oklahoma. Objectively speaking, Texas has the second best set of talent with a first round running back and a new, high-octane, offensive-minded coach. Oklahoma is a push at worst with their total sitting at an even 11.

For over 25 years, the Big XII Automotive Group has served the southwestern United States with quality vehicles at affordable rates. From Oklahoma’s unparalleled horsepower to the premium luxury of our Texas classics, there’s something for everyone on our lot. Don’t believe us? Check out some of these reviews from our real customers…

After Week 11 of the college football season, we honor the lovable losers who got one in the win column. Don’t get me wrong; we will absolutely go back to making fun of them next week. Just enjoy it while you can.

What College Football Games Are On TV (Week 10)

The weather in Texas changes on a dime. One minute, it’s sweltering, sweaty weather with the sun beating down on you. Then, an angry storm cloud dumps buckets of rain and hail on your head. Then, all your flowers die because of the biting, frosty winds behind the cold front that tanks the temperature for ...