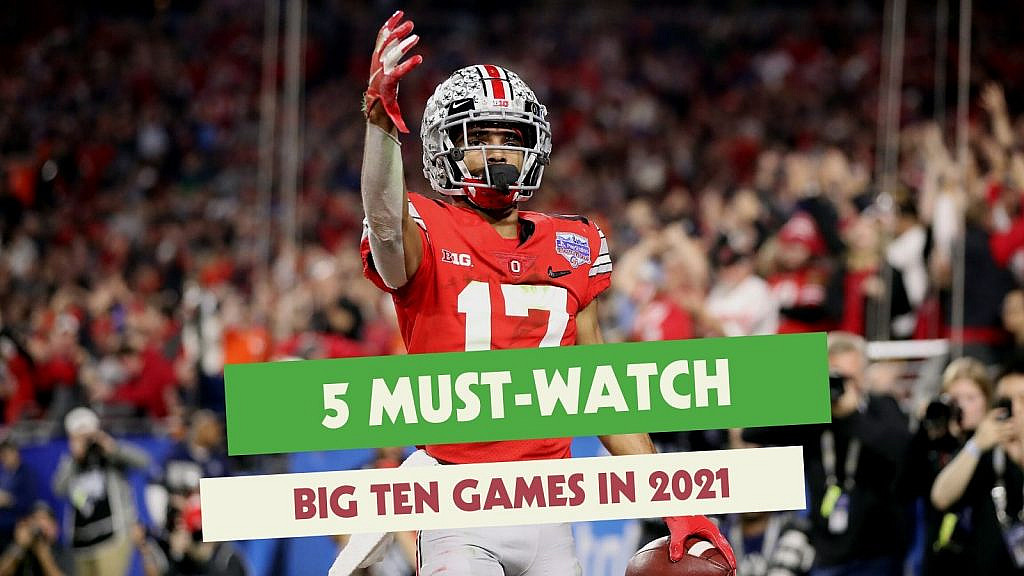 It’s time to talk about the conference of BEEF.

Every conference has a reputation, a brand, an identity. When I say “Big Ten,” you, dear reader, probably think power running, unyielding defense, and gargantuan linemen – three yards and a cloud of dust. And sure, we’ve got plenty of that on tap. But the B1G, full of Legends and Leaders (I will never let that nonsense go) is much more than that.

After a virus-impacted six-game season that should have been ten or twelve (I will never let that nonsense go either), we’ve got whole squads returning with a solid amount of experience, and a competitive race for second place.Yes, Ohio State will likely reign dominant over this conference. But there’s a bunch of extraneous excitement to look forward to.

Here’s the best five games I could find on the 2021 Big Ten football.  It is an exceptional slate. Let’s get going!

We’ve got a fantastic opener. First, the Badgers. Quarterback Graham Mertz is commanding the offense, and if his receivers stay healthy, Wisconsin should be a great contender for the Big Ten West title. They need to produce more big plays, and a long touchdown or two against Penn State would make a statement. As for the Nittany Lions, they’ve got a new offensive coordinator in vaunted Mike Yurcich. And on defense, with the exception of the line, which is a tad shakier, they look to take a step forward. I’m very interested in how these two squads clash.

Indy and Cincy. An abbreviation match made in college football heaven! Two offenses with intriguing talent in an early season matchup. Let’s start with the Hoosiers. Michael Penix is back slinging the rock after an ACL tear, with a BEEFY line to protect him. The defense has some question marks, but was formidable last year, limiting teams to around 20 points a game, and they return nearly everyone. But the Bearcats could make a serious statement by defeating the Hoosiers, as the projected top Group of 5 squad. Desmond Ridder will return, throwing to an elite cadre of receivers, with new starting running back Jerome Ford leading the rushing attack. And Cincy returns a top-tier defense with about a billion threats, including Ahmad Gardner at corner. Can the Hoosiers overcome, or will the Bearcats start a brilliant campaign for a New Year’s Six berth here?

I’ve already gone over Sconnie above, but to reiterate: Graham Mertz looks great. I didn’t mention the defense, but I really should have. They have spots to replace, but with eight starters back, they will probably in serious form in time for this showdown. The Irish will have a stiff challenge, but offensive coordinator Tommy Rees might be have a Badger ace up his sleeve. With Ian Book gone, Notre Dame has a serious hole to fill. They’ve brought in Jack Coan from Wisconsin to distribute the pigskin, as it were, but they’ll have a solid running back duo in Kyren Williams and Chris Tyree to rely on. It remains to be seen how well their offensive line can handle their roles to clear the way for those beasts. The defense has a new coordinator in Marcus Freeman, but doesn’t figure to miss a beat. They’ve lost a few shining stars, but with Kyle Hamilton leading from the safety position, I don’t think they’ll miss a step. What a massive clash!

At last we get to talk about the Buckeyes! C.J. Stroud, Jack Miller and early-enrollee Kyle McCord are the names to watch, as one of them will be taking over for Justin Fields at quarterback. My money’s on Stroud, but with newcomer TreVeyon Henderson taking over at running back and the best receiver duo in the nation in Chris Olave and Garrett Wilson, will it really matter? Their real advantage could be on defense. It’s experienced and loaded, and although it had some notable flaws last year, experience means excellence in my book. I think Penn State will provide a good test for them late in the year, challenging for the Big Ten East crown.

Hey, look, it’s the Nittany Lions again! Who’d have thunk it? Oh, against notable hot seat occupant Jim Harbaugh and his Wolverines? Sign me up. Michigan doesn’t really have a clear quarterback frontrunner heading into the season, though it figures to be either Cade McNamara or British Comedy Legend Alan Bowman. Otherwise, there is plenty of returning offensive talent. (The more things change, the more they stay the same.) At this point, it remains to be seen whether Josh Gattis can round the offense into the form. On to the defense, which returns a few key starters. They’ll need improvement in the secondary especially. They gave up an occasional haymaker of a long pass play last year. This will be a battle, and well worth watching.

Thanks for reading, and be sure to follow me at @WatchingFB on Twitter, where I deliver the hottest takes and the most lit of live blogs every week of college football action. And of course, follow The Solid Verbal everywhere they have social media. Next week we’ll have the Big 12, if it still exists (and even if it doesn’t)! Happy watching!

Every college football fan has their favorite bowl game, from the Famous Idaho Potato Bowl to the not quite as famous but still pretty nifty Rose Bowl. However, not all bowls are created equal, and many don’t withstand the test of time. For example, did you know the NCAA used to hold a game called ...

Remember learning about Newton’s Laws? An object at rest tends to stay at rest. An object in motion tends to remain in motion, unless acted on by an outside force. And every action has an equal and opposite reaction. Not only are these laws staples of physics, they actually apply to college football too. By ...

I don’t like flying. This week, I’m taking a plane trip, and I’m already a touch nervous. See, I find turbulence unsettling and annoying. The bumpiness is unpleasant and reminds me I’m not in control. Sometimes it feels like the metal tube with wings I’m in is ready to plummet unheeded to Earth. It’s not ...