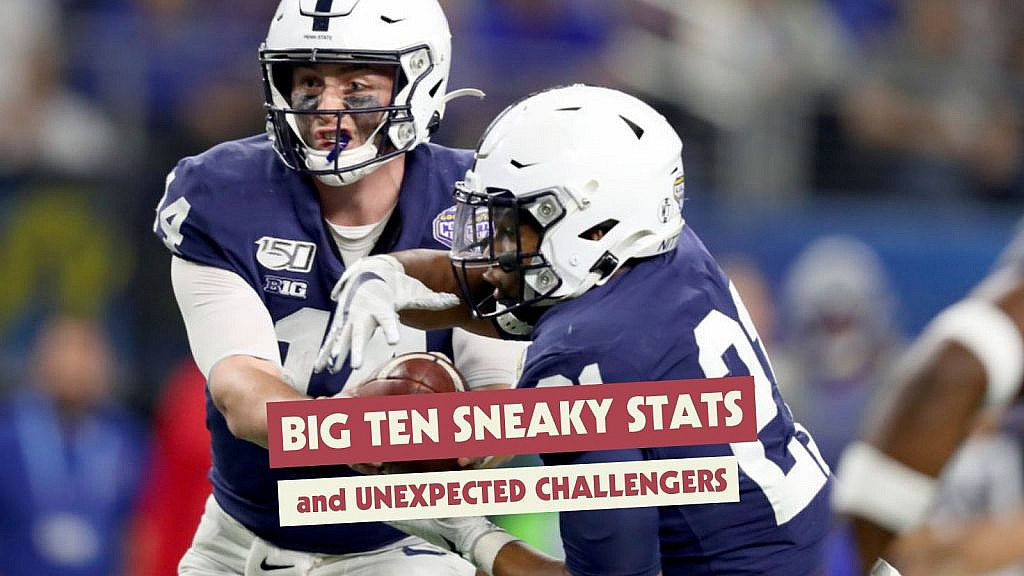 Just like the ACC, the Big Ten has been dominated by the same team for over a decade. Ohio State has won 11 conference championships since 2005. The closest in Big Ten titles in that same span is actually a tie between Penn State, Wisconsin, and Michigan State with three. Michigan has zero. (Sorry Maize & Blue fans.)

But again, can anyone challenge the king? Recent history would lean towards “no” but there’s a chance for several teams to compete.

Wisconsin has posted an average of 2.86 wins above expected per season given their recruiting rank and total victories in the College Football Playoff era. They return more production than they perhaps ever have. Penn State has lost eight of their last nine to Ohio State, but have the widest gap in returning production advantage over Ohio State in a very long time. Michigan has beaten Ohio State just one time since 2003. However, they’ve peaked inside the top 13 teams of the AP Poll six years running and have posted an average of over nine victories per year in that span (excluding last year’s shortened schedule).

And yes, even Iowa is interesting. Why? Since 2018 they’ve been criminally underrated by Vegas. Their average margin of victory in that span is over 13 points per contest. They cover just shy of 60% of their game spreads, and when they do cover, it’s by more than a touchdown on average. If they continue that rate of dominance over expectation, they could be a surprise dark horse.

Let’s take a look at the Big Ten by average recruiting rank, number of 3-5 star recruits added to their roster in the last five years, and returning production.

Michigan and Penn State have both been top 15 recruiting schools in the nation over the past five years. If anyone has the talent to match Ohio State it’s the Wolverines or Nittany Lions.

Wisconsin is 14th in returning production, and as mentioned above, typically overperforms given their recruiting ranks. Regression analysis says they should only average around six wins per year given their recruiting pedigree, but they consistently post seasons around 9.5 wins with less impressive athletes.

Maryland also boasts one of the best marks for returning production, and they’ve risen all the way to fifth in recruiting over the past five years. If Taulia Tagovailoa can clean up his interception percentage of 5.7%, they might have a fighting chance too thanks to their five-star talent at a couple skill positions.

Iowa’s taken their typical average recruiting rank from the mid-50s all the way to 36th in the nation in the past five seasons. That trajectory, mixed in with an average of 2.45 wins over expected, puts them in an very nice sleeper spot.

If any of these Big Ten teams is going to dethrone Ohio State it’ll be because of one of these unexpected units:

Wisconsin Offense – Wisconsin struggled greatly with COVID last year. If Graham Mertz and Jalen Berger will be given the keys to the offense this year (and can produce), the team should flourish. Berger averaged a full yard per carry above his teammates last year. Mertz tossed five touchdowns in his first start a year ago. If they can capture some of that efficiency magic, Wisconsin could truly win the Big Ten.

Penn State Run Game – The Nittany Lions ranked 85th in yards per rush attempt last fall thanks to the absence of perhaps their best runner in Noah Cain due to injury. Cain is back now. They added a top transfer back in John Lovett from Baylor, return the highly efficient Keyvone Lee, and possess a mobile quarterback. With Cain, Lovett, and Lee they could challenge Ohio State since the Buckeyes are missing seven of their top eight tacklers from a year ago.

Michigan Passing Game – Michigan went from averaging fewer than 27 pass attempts per game in 2018 to tossing the rock almost 36 times per contest last fall. They’re transitioning to a more balanced, and even pass-first team. If Cade McNamara or British Comedy Legend Alan Bowman put forth an efficient effort, Michigan’s speedy set of receivers may produce enough big plays to keep them in every single game this year.

Iowa Defense – They lost two thirds of their sack production to the NFL, but still return 76% of total defensive production and most of their starters. If they can find a way to bring pressure against the pass they could match their rank of 6th in the nation last year in points allowed per game.

Again, I pulled win totals from six different sources to create an aggregate projected win total rounded to the nearest half-win to find potential values to target this season.

The lowest-hanging fruit here is obviously Michigan considering, outside of last fall, they hadn’t logged a season below eight wins since Jim Harbaugh arrived. Their recruiting pedigree alone should boost them past 7 wins.

Outside of that, Maryland is interesting given their talent-base and incredible returning production.

Welcome to back to the Sneaky Stats series! Week 3 provided us with some fun upsets, some faithful favorites thrashing their opponents, and dramatic, potential playoff implications galore. Let’s take a brief look at some fun stats from Week 3, then look ahead to some sneaky stats that could impact Week 4 action! Week 3 ...

Hi, folks! This week we take a look at the Big 12, a storied conference with tons of tradition and blossoming offensive talent. So let’s look at — *everything’s on fire* Oh. Well. I’m sure that’s nothing, we can — *oh no, here come bloodthirsty panthers devouring everything that’s left* Ah. Got it. Texas and ...