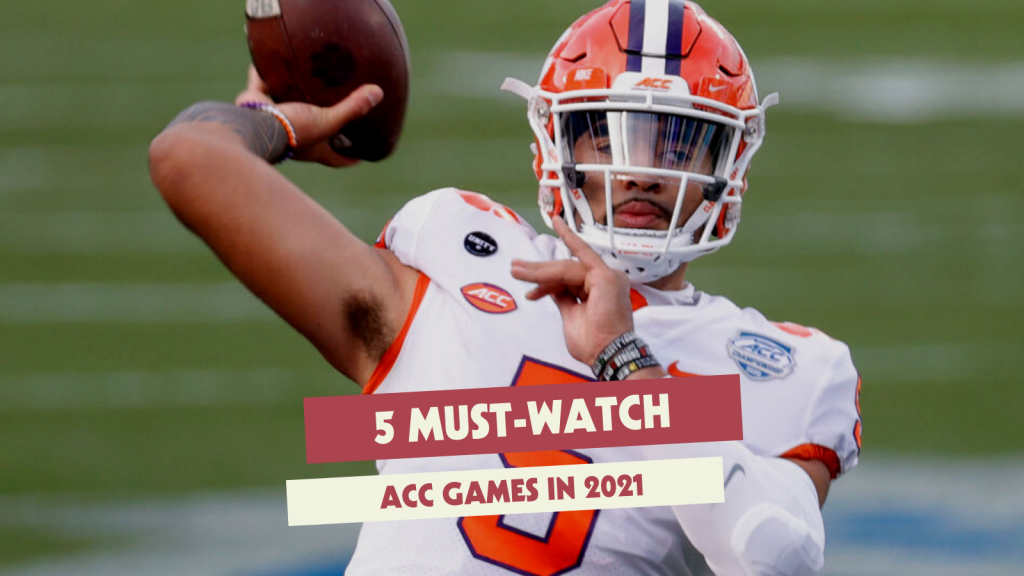 But there are some decent indicators that the second place race will be close and fun to watch. Multiple top-flight quarterback talents, whole returning squads thanks to last year’s truncated season, and interesting matchups abound. The ACC’s conference championship race should unfold every week in intriguing ways.

But the season hasn’t started yet! Ain’t nothin’ to watch!! What the heck could I, a writer who usually writes about watching college football every week, have to write about right now???

I decided to look at the ACC schedule and take a somewhat-too-early stab at which games you absolutely MUST watch.

A couple of ground rules:

1) If there’s an out-of-conference game I think is particularly stellar, and I think one team has more to lose than the other, then it’ll go in that team’s conference preview.

2) I’ll give you the time and channel for each game in my weekly columns throughout the year, but I can’t do that quite yet, as the particulars aren’t set in stone

For my money, this is bound to be the most interesting opening-week matchup. Clemson has a Heisman contender at quarterback in D.J. Uiagalelei, but I’m not sure who’s taking handoffs, and while Justyn Ross is back from injury out wide, I don’t know who else will be hauling in D.J.’s throws. But while Clemson has a couple question marks on offense, it probably has the best defense in college football. Can the Tigers avoid the Week 1 jitters? And if they can’t, can Georgia take advantage? The Bulldogs are absolutely LOADED on offense, with JT Daniels once again slinging it all over the place. Georgia also boasts a top-flight defense. The game itself is at a neutral site: Bank of America Stadium in Charlotte, the home of the Carolina Panthers. This is SUCH a hard one to pick, and that alone should make for a fun watch.

For the first time in a while, the Noles intrigue me. McKenzie Milton’s got one heck of a story, fighting his way back from a devastating injury, transferring into a Power 5 program. I maintain he’ll be starting for FSU. The question is whether he’ll have a sufficient quiver of weapons to play with. The transfer portal may be Florida State’s saving grace, as they snatched up talent on both sides of the ball. Then there’s the Cardinals. Will we see 2019 Malik Cunningham or 2020 Malik Cunningham under center?  Will Scott Satterfield base his offense more on Cunningham, or on shifty running back Jalen Mitchell? Can the defense come together early enough in the season to make an impact? Lots of questions, but here’s my likely answers: 2020, Mitchell, and probably. To sum it up, both FSU and Louisville have notable vulnerabilities, and a win for either team could prove important in building momentum.

I’m a huge fan of what Mack Brown’s building in Chapel Hill. Sam Howell is back leading the offense, and even though it’s lost a few notable pieces, the Tar Heels look like they reloaded well in the offseason. Chazz Surratt’s departure could be difficult for the defense to reckon with early on, but I think they’ll have congealed by midseason. (I’d also point out that they have early Best Name In College Football contender STORM DUCK at corner, so there’s that.) Miami is also in a good spot this year on offense, and if D’Eriq King is back to full strength, he has good line protection and a new target in transfer Charleston Rambo. They’re a bit shakier on defense with Manny Diaz calling coverages after last year’s leaky boat nonsense. (27 points a game?!?). Maybe this matchup is a pointsplosion waiting to happen, which could also be entertaining! Regardless, it’s one of the top games on the ACC schedule.

The Irish look dangerous. Replacing the feast-or-famine Ian Book at quarterback is Wisconsin transfer Jack Coan, who made his living off the high-percentage short pass with the Badgers. Notre Dame also has a solid stable in the backfield led by Kyren Williams. But the Irish lost four of five starters on the offensive line, so that’s a worry. The defense has a new coordinator and a decent amount of experience returning. To me, Notre Dame looks like a New Year’s Six contender (Maybe even a playoff contender? OK, probably not.) And I think that’s the expectation of the Irish faithful. Suffice it to say that this game should resemble a fight between two giant bears with chainsaws strapped to their arms: scrappy, brutal, and a little disgusting. Check out Ty and Dan’s Notre Dame preview for a longer form look at where the Irish are headed in 2021.

I don’t entertain any delusions that Louisville’s offense, no matter how much it improves, will be competitive against Clemson’s defense. But depending on how the Cardinals gameplan on defense, I think there’s a chance they can make this matchup closer than the Tigers would like. This is an important game to watch because, if the Cardinals do round into form by the late season, this could be the last real challenge Clemson faces en route to their yearly Playoff berth. The Tigers’ ACC schedule is very manageable, if only because they don’t have to play themselves. And after Louisville, Clemson only has to contend with UConn, Wake Forest, and South Carolina. I’m not worried for them.

Thanks for reading!  Next week I’ll be back taking a look at the always beefy Big Ten. Until then, feel free to follow me on Twitter at @WatchingFB.  See you then!

Sneaky Stats for Week 10 of the 2021 College Football Season

Welcome to back to the Sneaky Stats series! In Week 9, we saw Michigan provide their fans with the annual big game let down and Texas fail to show up for yet another second half. Let’s take a brief look back, and then a look ahead at Week 10 and beyond! Week 9 – The ...

Whether your team just capped off a 1-11 season or finished with 11 wins, almost all of us are feeling a little spurned right now. Today, let’s figure out who’s the saltiest.