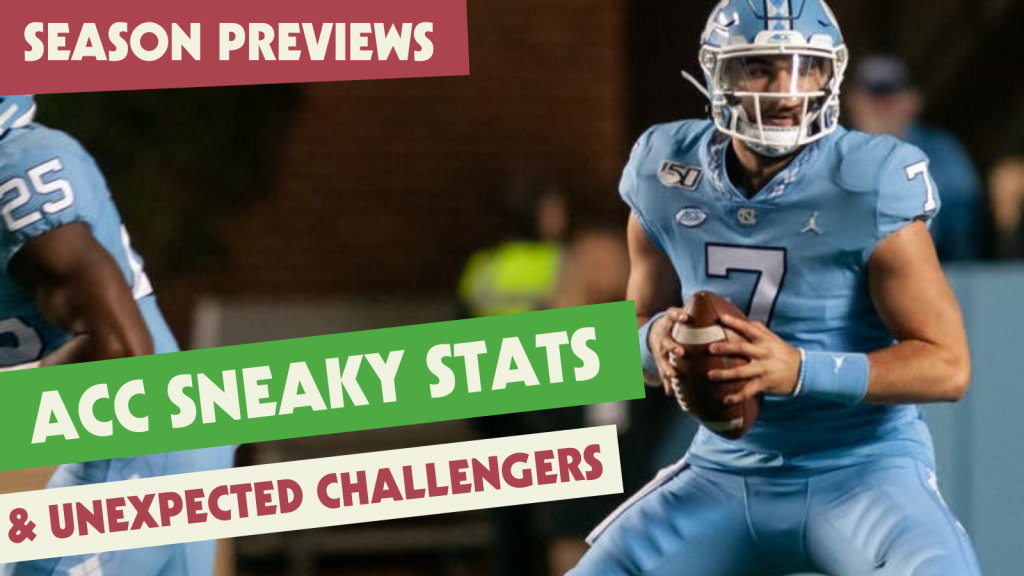 Hello and welcome to a fun, weekly, stats driven look at the state of college football! We’ll share interesting trends, discuss breakout players, dive into some fun statistics, and much more.

But! Before College Football officially kicks off (providing us with much more fun data to play with) we’ll be previewing each conference by the numbers to get you up to speed on the entire national landscape that we love so dearly. This week: a look at the ACC.

What History Tells Us About The ACC

If recent history can teach us one thing about the ACC, it’s that we can probably expect Clemson to dominate the ACC once again. They’ve won the conference six years in a row. In fact, the only other team to win the conference in the last 10 years is Florida State, and they aren’t exactly looking like a real threat.

“But what about North Carolina? Or Miami? Maybe NC State?”

North Carolina hasn’t won the ACC since 1980. NC State, 1979. Oh, and fun fact, Miami has never won the ACC because they joined the conference just a bit past their prime (2005).

This conference–barring an injury to Clemson quarterback DJ Uiagalelei–looks like it’s Clemson’s to lose.

However, recent history has also taught us that there are a few ACC teams that definitely over and underperform based on expectations. For example, despite historically ranking among the bottom half in ACC recruiting, Boston College, NC State, and Wake Forest consistently post at least one “win above expectation” most every year (calculated via a fun statistical toy called regression analysis). And you might not have guessed it, but Virginia has actually performed better than any other ACC team against the spread since 2018 (covering 64% of the time).

But who will be the ACC teams to surprise us and defy recent history this year? Let’s dive in.

One of best indicators of college football success is recruiting. But how much weight does it really carry? Well, using that fun statistical toy I mentioned earlier called regression analysis, I found that a school’s average recruiting class ranking accounted for more than 36% of the variance in total wins. That’s huge!

So, let’s take a look at teams by recruiting over the last five years (players who could still be on the team) and returning production to see if we can find some dark horse candidates in the ACC with enough horses to compete.

Yes, Clemson has recruited 16 of the 24 total five star recruits who have joined the ACC in the last five years. Again, that looks daunting. However, Miami, Florida State, and North Carolina have all been recruiting inside the top 25 consistently. All three have some four and five star talent to play with. Miami looks like the top contender candidate in the personnel department thanks to the fact they’re returning the third most production in college football according to Bill Connelly of ESPN.

This segment was inspired by Dan’s Wishlist items from last week’s show. Essentially, if anyone’s going to challenge Clemson there will need to be some level of unexpected success from a few teams’ offensive or defensive units. Which unexpected units might those be? I’ll give you three.

Miami’s Offense – They return 95% of their rushing production from a year ago, veteran QB D’Eriq King, and added a sneaky good WR from Oklahoma in the form of Charleston Rambo.

North Carolina’s Defense – They just need to be consistent. They allowed 26 or fewer points in SIX games last year, but they also allowed 41 or more in FOUR games. They have the young talent just based on recruiting pedigree. Now, just string some stops together.

NC State Offense – They return 106% (seriously) of their rushing production from a year ago (negative rush yards from last year’s quarterbacks makes that fun stat possible). Zonovan “Bam” Knight, Ricky Person, and Jordan Houston all return at running back. Devin Leary–who was posting 90th percentile passing efficiency numbers last year before his injury—returns at quarterback. They could be a real veteran surprise.

I gathered win totals from a half dozen sports books and built an aggregate projected win total rounded to the nearest half-win. Given some of the fun stats we’ve touched on, we should be able to find at least a couple good win totals to take advantage of this season.

You may have gathered this already, but given returning production and strength of rosters, the four “favorites” to make any kind of run at Clemson are Miami, North Carolina, NC State, and Florida State.

NC State and Florida State may be sneaky win total targets. The Wolfpack returns a bunch of offensive production. The Seminoles look like they’re rolling out McKenzie Milton at QB, which should be a clear upgrade from a year ago. Both teams have climbed into the top five for ACC recruiting in the last five years. 6.5 and 5.5 seem like conservative totals.

Welcome to back to the Sneaky Stats series! Week 5 revealed to us the truth about several teams, but it’s still unclear if there are actually more than two or three good teams in all of the sport. Let’s take a brief look at some fun stats from Week 5, then look ahead to some ...