As the Reverb Line (408-VERBAL1) continues to ring off the hook, I must make an admission:  I was wrong.  Really wrong, actually.  I thought the uptick in positivity we saw in your calls was a mere blip on the radar. I thought, well… I thought you all were a bunch of cynics.  As the chart below clearly shows, it was no blip.  Last week, an astounding 65-percent of callers were in a good mood. That is just a hair shy of our peak in Week One at 67-percent. 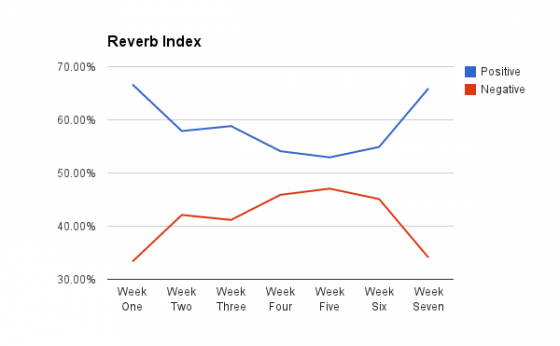 To what can we attribute all of this happiness? Upsets! Glorious upsets!

Yes, apparently, fans are more likely to call if their favorite teams won (or if they can troll a rival) than if their teams lost.  By a wide margin, Texas’s surprisingly dominant performance in the Red River Shootout over Oklahoma was the most popular game in your calls, discussed in just over 26-percent of them.  Meanwhile, Penn State’s upset over Michigan was the second most popular game, clocking in at just over 15-percent of such calls.  These games had a number of callers thinking the on the same wavelength:

Oregon’s defeat of Washington and Georgia’s capitulation to Missouri rounded out the most popular games.  On one hand, Oregon is really freaking good. I have to agree with this caller it looks like it just might be their year (jinx!).

On the other hand, Georgia’s defense and Dan in Tuscaloosa had me humming the Mr. Softee music all weekend.

Speaking of disappointments, somehow even with Notre Dame not playing, Tommy Rees found his way into your calls.  Apparently, you all just can’t quit him. Although, I must say, I can definitely see Rees throwing a pick in a backyard game of 5-on-5.

Last week, you again spread the love and hate around with Case McCoy, Mack Brown, Brendan Gibbons, and Blake Bell all getting name-dropped.  Poor Brendan Gibbons… it’s never good when a kicker winds up in your calls.

On the flip side, people actually said nice things about Mack Bro… oh, never mind.  I can’t even type it with a straight face.  Mack Brown remains a magnet for criticism and the quick wit of Verballers far and wide.  This call was the closest anyone got to saying something nice about him.

Finally, a shout out to Greg in the West Village, who reminds us that no matter what Syracuse might have you believe, good football can still be played in the state of New York.