Last week’s slate of games produced some rather interesting calls to the Reverb line (408-VERBAL1).  Surprisingly, callers reversed a season long trend and expressed more positivity.  As you can see from the chart below, last week’s 55-45 good mood / bad mood split was the largest since Week Three.  It will be interesting to see if this is simply a blip on the way to a majority of callers being miserable, or if we might see an actual turn around.  Personally, I’m not sold quite yet. 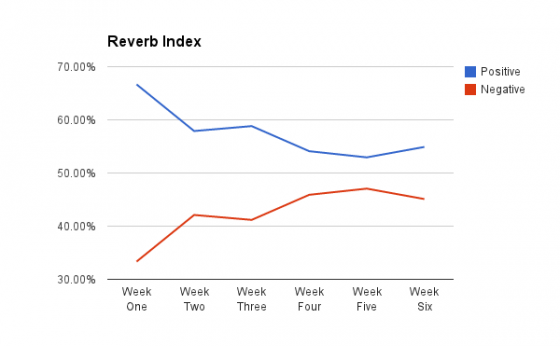 Let’s take a knee for a moment and talk about Lane Kiffin.  (C’mon, you know you want to!)  Kiffin just can’t distance himself from Verballer snark and was featured in just under 10-percent of calls about a player or coach.  Kiffin might want to add this to his resume if he hasn’t already.  Still, in terms of Reverbs, he’s no Urban Meyer.   Meyer was the most talked about entity, showing up in just under 24-percent of such calls.  This was significant, if only because it was the first time a coach was the most popular topic of conversation.  This could be a one-time thing until Art Briles eventually takes the Texas job and lights the Verballersphere on fire.  In the meantime, this is pretty representative of how callers felt about Urban Meyer:

Of course, there were also several players discussed in your calls.  It gave me the warm fuzzies to see how Verballers spread the love—or, um, hate—around, mentioning almost 20 different players.  Some callers are still hung up on Tommy Rees, but Jameis Winston clearly stole the show last week.  Without a doubt, callers talking about the Wonderful Monster were some of the happiest.  His play has some fans looking ahead with confidence (hubris?):

Confidence was in short supply for Ohio State fans.  Ohio State’s fourth quarter comeback win over Northwestern was the most popular game of the week, garnering just under 19 percent of calls. But it would seem Buckeye fans were all about the downside:

Georgia’s overtime win against Tennessee provoked a sizable response from Verballers as well.  Reactions ran the gamut, but it seems the most popular response was to simply mock Georgia for struggling with Tennessee.  One caller even wanted to create a new term:

The Notre Dame – Arizona State and Washington – Stanford games rounded out the top four.  The best part of Notre Dame’s win was that it indirectly triggered a new wave of Lane Kiffin hate:

Finally, the Washington – Stanford game got started so late on the East Coast it had some of you pondering existential questions of college football: