Week Four of the college football season did not phase the Reverb line (408-VERBAL1).  Indeed, the phones continued to ring; however, moods began to wear a little thin.

As you can see in the chart below, callers are slowly becoming more downtrodden.  Last week, 45.9-percent of Verbalers called to vent their frustrations.  It’s the highest we’ve seen so far.  Despite this rise in negativity, most of you (54.1-percent to be exact), were content with what you saw on the gridiron this weekend. 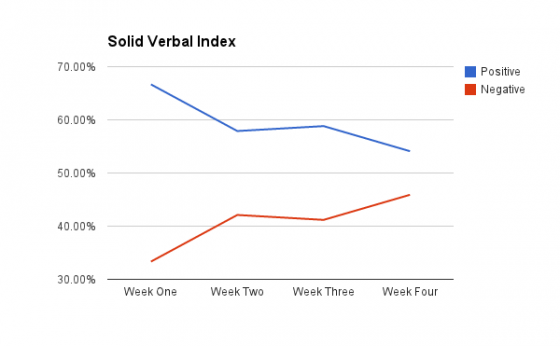 Now, this creeping uneasiness about how the college football season isn’t driving people to drink (or least to call in after drinking), because less than five-percent of callers seemed even remotely toasted.  I’m disappointed, but I guess the true gems of drunkenness are something I’ll discover once teams such as Clemson, Oregon, and Ohio State crush dreams and lose.  It’s going to happen.

Speaking of those who crush spirits, Tommy Rees, thankfully, was not the most talked about player this week.  Let’s put our hands together for the ballyhooed Andrew Maxwell.  Nobody’s defined whether it’s an honor or a dishonor to be the most popular topic among Verballers, but Maxwell found his way into 12.5-percent of calls that mentioned a player.

Despite the complaints about Maxwell, calls about players were pretty upbeat and diverse last weekend.  Callers mentioned 25 different players.  Among those names was Ohio State’s Kenny Guiton, who set a school record with six touchdown passes in a creampuff game against Florida A&M.  Nonetheless, his four first quarter touchdown passes inspired calls such as this:

Florida’s Tyler Murphy showed a steady hand in relief of the injured Jeff Driskel.  Gator fans responded by giving him a nickname:

We’re continuing to see a large amount of games discussed on the Reverb line.  All told, 26 different contests showed up in your calls.  North Texas’s valiant efforts against Georgia led the way with just over 14-percent of calls about specific games.  The Mean Green’s efforts had many callers wondering what it all meant:

USC’s narrow victory over Utah State produced the second most calls about specific games at just over 12-percent.  Of course, even in victory, there is still much derision for Lane Kiffin, as there should be:

The Michigan State-Notre Dame game and the thrilling Michigan–UConn games rounded out the most popular contests of the weekend.

Finally, Rob from Seattle wanted the story of Washington’s Deontae Cooper told.  Ask and ye shall receive.  Cooper tore ligaments in his knees three pre-seasons in a row.  After much hard work, the fourth-year junior was able to come back and score his first career touchdown in the fourth quarter of Washington’s drubbing of Idaho State.  A great story, indeed.