The Reverb Line is flourishing.  And surprisingly upbeat.

As you can see from the following chart, while the majority of callers remained generally in a good mood, there was a decline from Week One’s 66-percent to Week Two’s 58-percent.  Week Three saw moods hold steady with nearly 59-percent of callers generally upbeat about the weekend’s events.  Further, in Week Two only about 17-percent of you were drunk when you called in. Week Three had even less, as about 11-percent of you sounded audibly intoxicated. I have to say, I remain underwhelmed in this area. 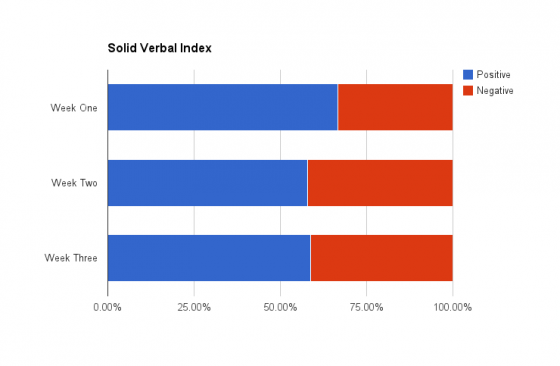 Still, after listening to all of your calls, I was a bit surprised that the majority of you were actually in a good mood. I heard a lot of talk about Mr. Softee, tire fire offenses, and how much Lane Kiffin sucks.  Looking back, it became clear that schadenfreude was buoying a lot of people’s spirits.  Apparently, misery does love company.  Many of you derive pleasure from the struggles of Texas and USC.  I know I do.

Speaking of those who struggle… somehow Tommy Rees remained the most talked about player in your calls in Week Two. “Tommy Turnover” found his way into nearly 27-percent of calls that referenced a player. While Rees might be 34th nationally in passer rating, he’s apparently first in your hearts.  But, in Week Three, Verballers found an new favorite player: Johnny Manziel.  His near comeback propelled him into being the most talked about player, showing up in over 27-percent of player calls.

Verballers continue to discuss a wide variety of games.  In Week Two, callers discussed 25 different games.  The most popular was Michigan’s defeat of Notre Dame, which was mentioned by nearly 24-percent of callers who referenced a game.  BYU’s steamrolling of Texas was another popular topic (19-percent).  Other favorites included Miami’s win over Florida and Washington State’s upset win over USC in a defensive struggle.  Personally, I enjoyed the triumphant calls from Washington State fan like this one.


In Week Three your calls were a bit more focused on the major games.  Unsurprisingly, the thrilling Alabama – Texas A&M game was the hottest talking point.  This Alabama caller captures the intensity of the final quarter better than anyone else:

Although as a non-SEC guy, I highly endorse this sentiment:

Texas’ continued inability to stop the run made its loss to Ole Miss the next most popular game with it discussed in nearly 12 percent of calls about specific games.  The debacle at the end of the Wisconsin – Arizona State game propelled it to the third most talk about game.

Finally, I’m going to change gears a little bit.  These indices are mostly about showing what popular week to week amongst callers.  However, for me, it is most fun listening to the true randomness of some callers. I’d say the most random—or at least my favorite amongst the random calls—was this one, which referenced Georgia Southern and Tracy Ham.  Both unexpected and appreciated.