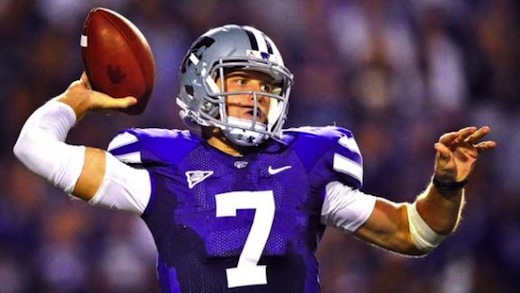 Welcome to The Inbox, where we thoughtfully respond to your e-mails in written form, because we couldn’t find time to work them into the show.

Don’t hate K-State just because they might prevent ND from going to the NCG. K-State is a great story, and Colin Klein shows what student athletes and all people should be. Good honest people just doing their best and working hard to improve themselves everyday. Just stop hating and start loving.

Since this is clearly being addressed to Ty, the Solid Verbal host who remains the most skeptical of Kansas State, I (Dan) will take the opportunity to both speak on his and my own behalf in responding to the various pseudo points in this email.

Nobody “hates” Kansas State. Presumably, we’re all adults or verging on adulthood, and an important step in this process is eliminating the word “hate” from your vocabulary unless it refers to actual hatred of something or someone, not making fun of famous people or college football teams. The less you can verbally lump yourself into a crowd of 14 year old Nicki Minaj Street Team members, the better.

Ty thinks Kansas State is an outstanding football team, but doesn’t fully buy into them running the table or being on the same level as other teams he perceives to be at the top of the college football mountain. This is a perfectly acceptable position to take.

Colin [sic] Klein, by all accounts, is a nice guy and a great (not just good) college football player.  Neither you nor I actually know him (I presume), but if all people shouldn’t kiss their significant others until their wedding day, I’ll just go ahead and kill myself now, thanks. He’s a football player, let’s enjoy him barrel through outside linebackers and take any Gameday deification ESPN produces with a particularly minuscule grain of salt.

As for your last sentence, I have no idea how you would know that Kansas State players as a whole are “good, honest people” and Notre Dame players aren’t, but I’ll just leave that be.

If Ty actually “hated” Kansas State, I would guess that the anger would probably render him unable to put together coherent thoughts while he brimmed with rage at the prospect of Kansas State as a top college football team. He’s a college football fan, he likes Notre Dame, he wants Notre Dame to be in the national championship, just like you want Kansas State to be there. It’ll be alright either way, since it’s still college football and not something dumb like baseball or raw tomatoes.

What’s not to love about that?

Support the podcast by wearing the very latest in Verballer apparel, custom-designed by Ty and Dan.